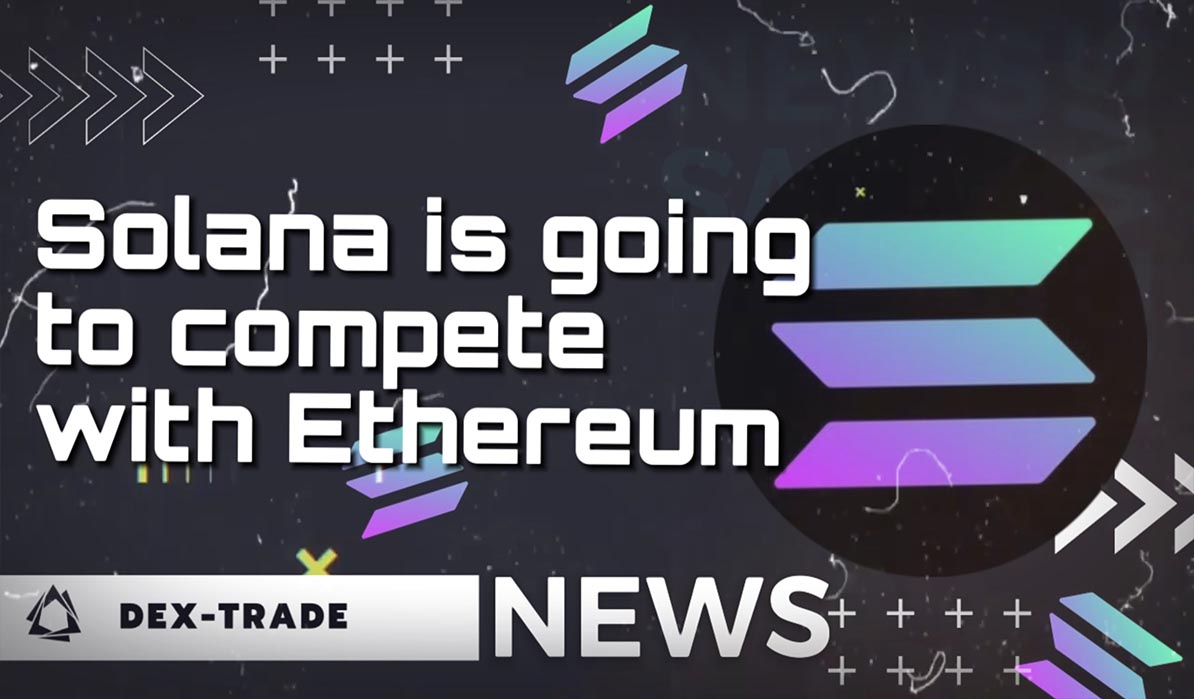 Bitcoin is testing resistance at $ 50,000, Binance is introducing KYC, and Solana is going to compete with Ethereum: the results of the trading week and market trends

Past week on the crypto market was, perhaps, one of the quietest in the last two months. And it's not even about the balanced volatility of main assets, but about the stable growth of whole market.

Nor the failed audit of South Korean crypto exchanges, nor the infamous Infrastructure Bill, nor even the addition of KYC to the registration procedure on the largest crypto exchange Binance could reverse the trends of key digital coins.

It seems that the tightening of regulatory measures in large crypto regions has stimulated developers and consumers of digital finance to redirect attention to countries that are loyal to the implementation of digital economy mechanisms. Thus, India, Ukraine, Pakistan and Vietnam became the leaders in crypto adoption, overtaking China and the United States.

And the main indicator of market stability is the confident growth of BTC, which by the end of the week got close to the predicted $50,000, slightly backing off in the correction.
BTC at $ 50,000 - not the limit, but serious resistance is coming
The close of Friday's trade above $48,000 proved to be an important market event. Cryptogold followed exactly the lower trend line, which had been formed since the end of July. And the main “culprits” were the buyers who supported the bullish narrative with all possible forces.

From Saturday until the end of the week, BTC added 4% to the basket, reaching $49,300. The 20-day SMA, effective in short-term and medium-term forecasts, has consistently reflected a bullish trend for a month, but the RSI does not rise above 70-72, from which makes it clear that the bears are not asleep.

Experts recommend paying attention to the levels of $50,000, $51,000 and $52,600, which may turn into serious resistance next week, since a fairly large number of sellers are concentrated on them. At the very least, these marks can become a reason for a Bitcoin correction, which should also be taken into account.

If the bulls fail to overcome the resistance and reach a short-term plateau, cryptanalysts predict a reversal and a pullback to the most powerful support to date, which is located at $42,200 and $41,000.

Solana is going to compete with Ethereum: opinion of the crypto expert

Kyle Samani from Multicoin Capital is confident that SOL is already superior to ETH in technical aspects, as the Solana blockchain is more versatile and better suited to work with DeFi.

“If you want to do a real de-fi derivatives trading protocol you cannot do it on Ether 1.0. Because of the risk of liquidations in cascades, you need to have a kind of high-frequency low latency system and you can’t just do that on Ethereum.” — said Samani.

The prospects of SOL have long been noticed by institutional investors, which significantly affected the price of the coin: at the beginning of the year its value was $1.5, and by the second decade of August it reached a record $75. 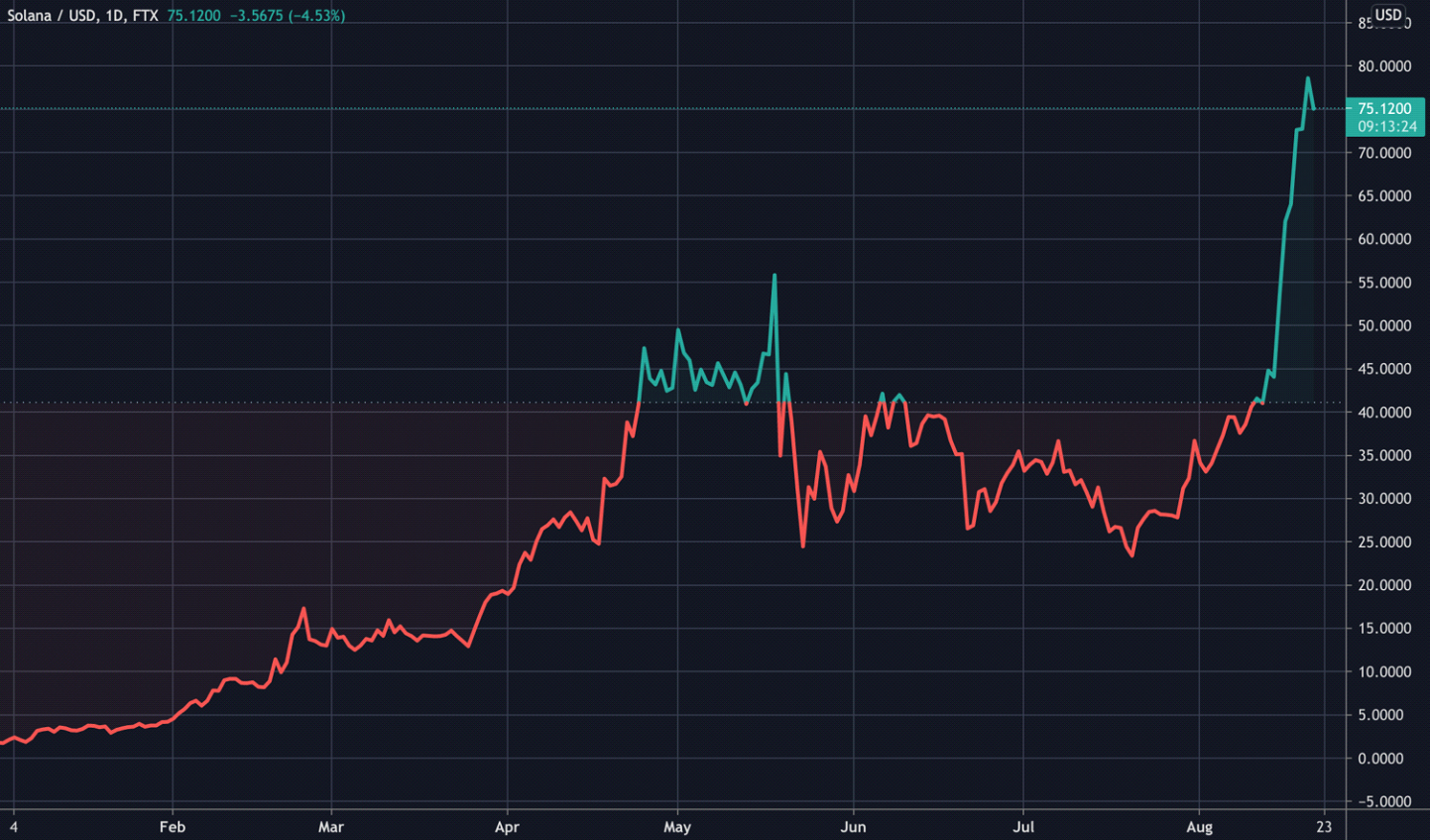 “I think Solana's growth rate will be consistently higher than Ethereum for the foreseeable future,” — said the crypto expert.

By Saturday, Solana had already entered the top ten cryptoassets in terms of capitalization, having collected almost $22 billion, and on Sunday its price jumped the $76 mark. The weekly growth of the coin was 75%, monthly — 205%, and since the beginning of the year it has added 3800% to its value.

Ethereum seeks to repeat the historical maximum, but not everything is so simple

The end of the week turned out to be very optimistic for Ether, which increased by 2.5% from Saturday to Sunday, reaching $3290. Then, crypto-silver pulled back insignificantly, but retained the strength of the trend to continue the rally next week.

Notably, ETH has held out above its immediate strong support at $2,977.68, while showing signs of consolidation. Based on this fact, crypto experts predict the asset's growth to the key resistance at $3322.80. However, this is only possible if the growth dynamics of the coin is maintained.

However, the technical indicators do not give unambiguous indicators on the 4-hour broadcast chart. The Awesome Oscillator has highlighted green signal bars, which indicates an increase in the price during the next trading session. Buying strength has also recovered, breaking the bearish zone, as evidenced by the RSI reading near 60.

But the MACD data gradually went down, although the green bars on its histogram dominated over the last few sessions. Thus, in the event of a price reversal, ETH could pull back and find support at $2,977.68.