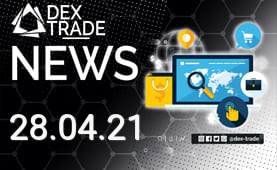 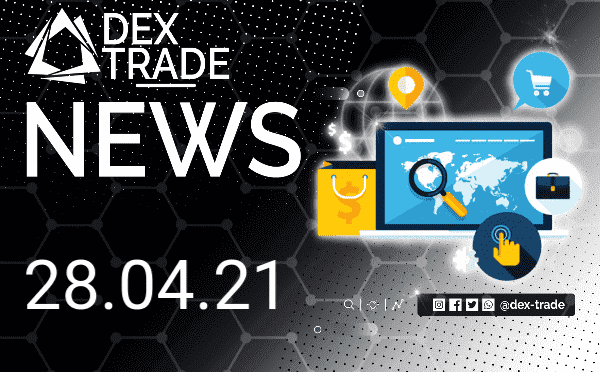 As the market is unwinding in the middle of the working week, traders and investors are turning their gazes away from charts towards warmer shores in expectation of the coming vacation season. The following is an overview of the main headlines of Wednesday, 28th of April, 2021.

The price of Bitcoin has managed to test a new important barrier in the wake of its near catastrophic collapse last weekend. The king of cryptocurrencies rebounded in price from the support area formed by long-term Fibonacci levels in the $46,900 to $ 47,725 region. The long-term Fibonacci 0.5 orange and short-term Fibonacci 0.786 black have passed through the midpoint of the lines and converged to form an important indicator. The market price of Bitcoin has thus managed to attain a local maximum of $55,738, which signifies a bullish reversal signal given by the MACD indicator. Despite such rosy outlooks, the RSI and Stochastic Oscillator are still bearish.

The US authorities have detained a Russian citizen on suspicion of laundering $336 million through the Bitcoin Fog service used for mixing Bitcoins. Russian citizen Roman Sterling, who is also a citizen of Switzerland, has been arrested on accusations that stretch as far back as 2011, when he founded his service. Sterling faces three charges including money laundering. According to the United States Internal Revenue Service, the Bitcoin mixer was used to transfer about 1.2 million BTC and is believed to have laundered funds received from Silk Road, Evolution, AlphaBay, Agora, and Silk Road 2.0. Moreover, the IRS found out that some Bitcoin transactions were directly related to the DarkNet market.

Nexon, a popular video game publisher from Japan, which is best known for titles such as MapleStory, KartRider and Dungeon&Fighter, has invested over $100 million in Bitcoin. In a statement released to shareholders, Nexon announced that it purchased 1,717 Bitcoins at a market price of $58,226, placing the amount investment at less than 2% of the company’s total funds. Nexon CEO Owen Mahoney said the company believes that Bitcoin will retain long-term stability and liquidity.

The power of Musk

The price of the Doge memecoin has once again reacted to a tweet made by Elon Musk, jumping by as much as 20%. The tweet Musk posted referred to the comedy show Saturday Night Live, which is scheduled for May 8, adding “The Dogefather” in the text, referring to the memecoin.