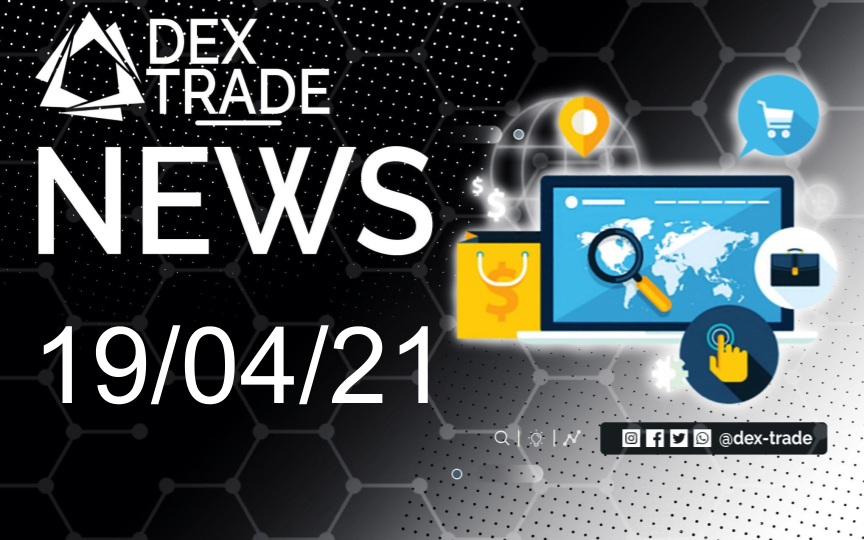 The crypto market is still shaking and weak at the knees after the tumult of the weekend. And though the main players have somewhat recovered their positions since the crash, the market is witnessing new and more frightening developments. The following is an overview of the headlines from Monday, April 19th.

The crash that Bitcoin lived through over the weekend, falling from $64,000 all-time highs to around $54,000 was the result of a phenomenon called a flash crash. At the moment, Bitcoin has recovered to a resistance level of around $57,000, but investor sentiment remains shaky, as the technical analysis graphs show a tendency that could signal a protracted bearish trend. Though there was a recovery during the first day of the working week, the technical indicators remain bearish as the MACD is showing a bearish reversal signal and the RSI has dropped below the 70 level. The long-term trend is showing signs of significant weakening, which is also confirmed by the bearish candlesticks on the chart as Bitcoin has formed a long bottom wick at 9%, which is a strong signal of buying pressure. In addition, the wick appeared directly in the $51,000 support area. Despite the gloomy prognosis, the technical indicators are still bullish as the RSI is providing strong hidden bullish divergence signals, which have been confirmed by the price of Bitcoin at closing of trading on Monday.

The Executive Director of the World Economic Forum – Sheila Warren – has stated in her most recent interview that the regulators will be introducing strict control measures in regards to the crypto economy as a whole. She has also stated that the authorities are worried by the rapid and seemingly rampant swelling of the crypto economy, which is threatening their positioning and dominance in terms of monetary control around the world. Sheila has also hinted at the start of the regulators’ promises to enact “killer regulation” measures against cryptocurrencies by reminding of the decision that the Central Bank of Turkey made by banning all crypto transactions in the country.

The British Government has stated in a recent press release that it is working of forming a dedicated working group that will be tasked with creating a British analogue of Bitcoin. The aim of the “Britcoin” currency, which will be supported by the Bank of England and tethered to the British Pound, will be to rid the market of excessive intermediary involvement. The sources did not provide any additional details, but it is clear that the “Britcoin” will be a quasi-CBDC.

Crypto Yuan at the Olympics

The Chinese authorities have stated that they are planning to allow visitors and athletes attending the Beijing 2022 Winter Olympics to use the crypto Yuan digital currency. CNY will be made available in a broader list of cities across China and the authorities are confident that the grand-scale event will act as the perfect testbed for the digital asset.