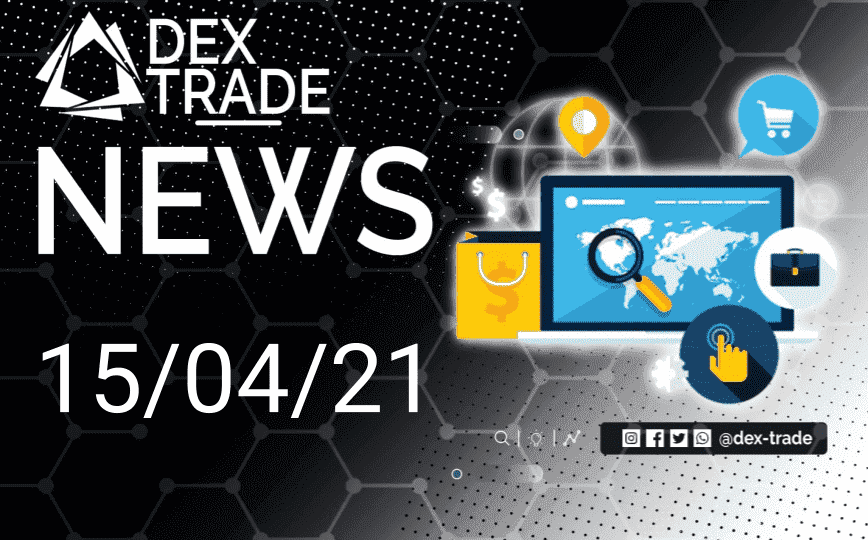 The crypto market started winding down for the coming weekend, but Thursday was anything but uneventful. The following is a short overview of the main news that made the headlines on April 15th, 2021.

Ethereum on the rise

The largest blockchain network has continued its growth as the developers announced a tentative date for the Berlin Hard Fork and excitement over the impending launch of Ethereum 2.0 grows. ETH has been growing all week, testing consecutive resistance levels before finally testing the $2,469 mark on Thursday, April 15th, with a daily gain of 3.7%. Among the main factors influencing the growth of ETH is the aforementioned Hard Fork, and the fact that the Coinbase exchange has been listed on Nasdaq. Considering that Ethereum is the second most traded coin on the market, the influx of users on Coinbase willing to trade has affected prices and pushed positive dynamics.

The crypto market has surpassed the capitalization of Apple, the Silicon Valley Giant, and has attained a staggering volume of $2 trillion. All digital assets currently in circulation are estimated to have a total capitalization of $2.243 trillion, which outstrips the value of the most expensive company in the world –Apple with its capitalization of $2.203 trillion. Microsoft Corporation is also far behind at $1.95 trillion, along with Alphabet Inc, Amazon, Tesla and others. The growth in capitalization can be largely attributed to the rise of Bitcoin, which has been beating price records all week.

Bitcoin has attained a new price record after having reached the $64 854 mark on Thursday during intraday trading. Though the king of cryptocurrencies rolled back from the price mark later, analysts are confident that it is only a matter of time before Bitcoin manages to break through the resistance level. Analysts are placing high hopes on weekend activity and the start of the next working week, which will see heightened activity from investors before the holidays.

ITrustCapital's # 1 Crypto IRA platform has announced that it will allow investors to use cryptocurrencies, digital assets and precious metals for forming their retirement accounts. Among the assets that can be used to save up pension funds is the ADA Cardano digital asset. The option was launched against the background of the rapid growth in the value of the cryptocurrency as the ADA token is trading at around $1.45, and the total capitalization of the cryptocurrency exceeds $46.7 million.