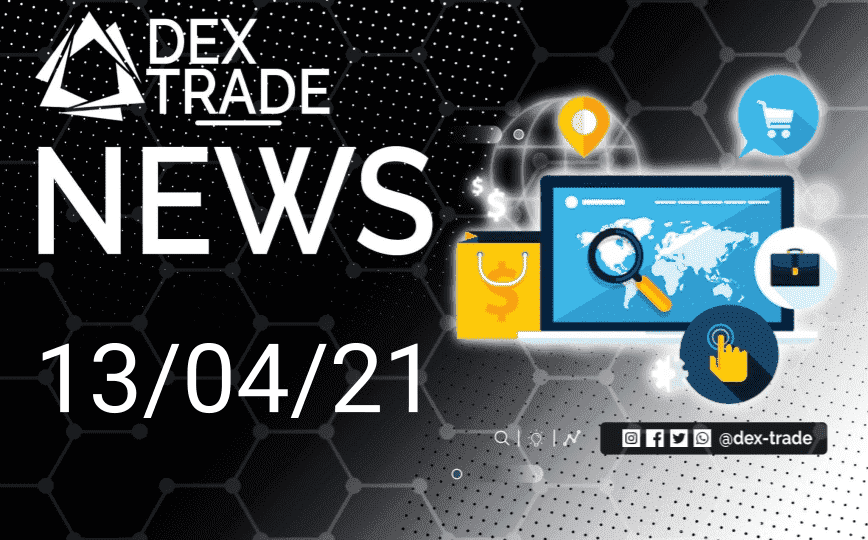 Tuesday continued the rally on the crypto market as the day went on, marking a sharp momentum for the rest of the week. The following is an overview of the news that made the headlines on Tuesday, April 13, 2021.

Bitcoin managed to beat another price record on Tuesday during intraday trading. The price of the king of cryptocurrencies reached a historical maximum of $62,100. The market capitalization of the market’s main cryptocurrency rose by 4.34% to a staggering $1.16 trillion, overcoming its all-time high reached on March 13 at $ 61,900. The growth of Bitcoin is taking place in spite of a fall in its overall capitalization as other altcoins are gaining momentum and pulling the market upward, giving numerous participants the chance to catch up on the value storage capabilities of Bitcoin.

The graphs of Bitcoin on the trading charts have shown a dangerous indicator – the Pi cycle top, which has been spotted for the first time since the bullish run of 2017. The Pi cycle top indicator, also known as the Pi indicator, appears when the 350-day moving average crosses over the 111-day moving average. As a rule, this happens before the start of a large-scale correction and a reversal into a bear market. The movement comes as the market is experiencing unprecedented growth, which will inevitably be exchanged for a bearish one as the momentum of investor confidence and price hikes subsides. Over the course of the entire history of Bitcoin statistics, the Pi indicator has given signals only twice – in 2013 and in 2017. In both cases, Bitcoin formed a top within five days after crossing the DMA and started to decline.

The price of Ripple’s XRP coin rose by another 20% after the petition to rescind the lawsuit of the SEC was successfully accepted. According to the documents made available to the public on the details of the case, the Securities Exchange Commission has no competence to prove the guilt of Brad Garlinghouse, the head of Ripple, beyond any reasonable doubt. According to the SEC, Garlinghouse incited Ripple to violate the securities law by conducting an illegal sale of XRP tokens to raise funds for the project. The news sparked renewed confidence among XRP holders and triggered trading momentum.

Ripple has also won a lawsuit against Tetragon Financial Group as the Delaware State Clerical Court ruled in favor of Ripple in a lawsuit filed by Tetragon in January of 2021. The XRP token has received another boost in price after the release of the news and started growing rapidly. The coin is already testing the $1.8 mark after having risen in price by almost 90% over the course of the week.

EIB to sell bonds on blockchain

The European Investment Bank plans to leverage the capabilities of blockchain technologies for selling bonds. The news comes after the EIB contacted Goldman Sachs Group Inc., Banco Santander SA and Societe Generale AG to explore the possibility of issuing digital bonds in euros, which will be registered and settled using the blockchain.