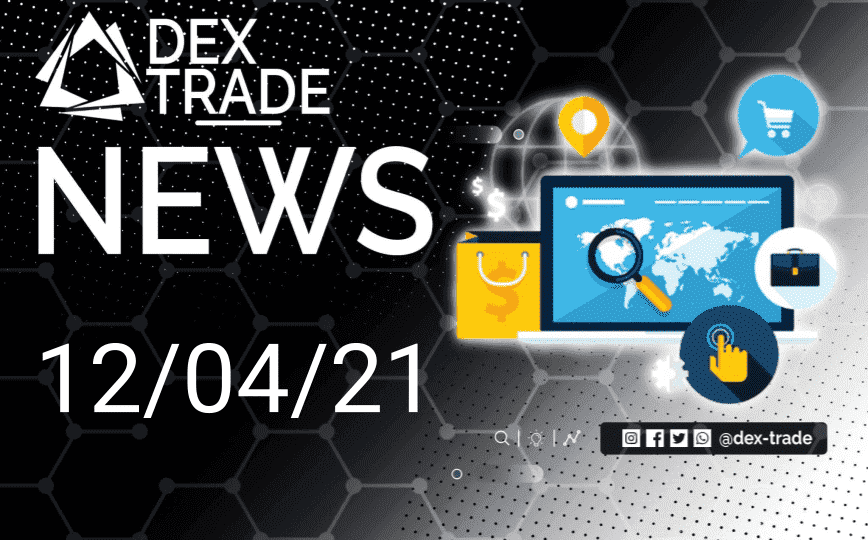 Monday was off to a hot start for the crypto market as the movers and makers woke up and started going about their business. The following is a brief overview of the main headlines of Monday, April 12th, 2021.

Bitcoin closed the week on a maximum, setting a price of $61,500 during intraday trading. And though the price is growing, the king of cryptocurrencies is showing signs of waning, as the momentum of the MACD is declining and the RSI is giving signals of incipient bearish divergence. However, the RSI has not yet reached the divergence line, and the MACD is not signaling a bearish reversal yet. Everything will now depend on further investor sentiment and the continuing adoption of the cryptocurrency.

The king of cryptocurrencies is losing its market share and has declined to a two year minimum, despite its growing price and valuation. The increasing market capitalization of Ethereum and altcoins is pushing Bitcoin off the forefront as its dominance has reached a mark of 54.44%. The last time Bitcoin was in this state was at the end of April 2019.

The commissions for transactions on the Ethereum blockchain network have fallen to a five-day minimum, giving users a breather and signaling a reversal in the trend of appreciation. The average commission on the Ethereum network currently stands at $10.84 – the lowest level since the beginning of March. The dynamics are a direct response to the growing capitalization of the DeFi market, which has been gaining traction over the recent weeks. Uniswap’s total value locked increased by 11% over the last day and reached a value of $8 billion.

Telegram at it again

The Telegram messenger is preparing for an IPO as Pavel Durov seeks to recoup his losses from the failure of the TON project and find funding for the free messenger in light of swelling user numbers. With millions of new users migrating to Telegram as digital refugees from Whatsapp, Facebook and other state-puppeteered resources, the messenger is in need of funding, which can be found through an IPO. Considering Telegram’s popularity, Pavel Durov is confident that the messenger will find its investors. The year 2023 is being designated as the date for entering onto the stock exchange, but sources note that the exact date will depend on the dynamics of the markets.