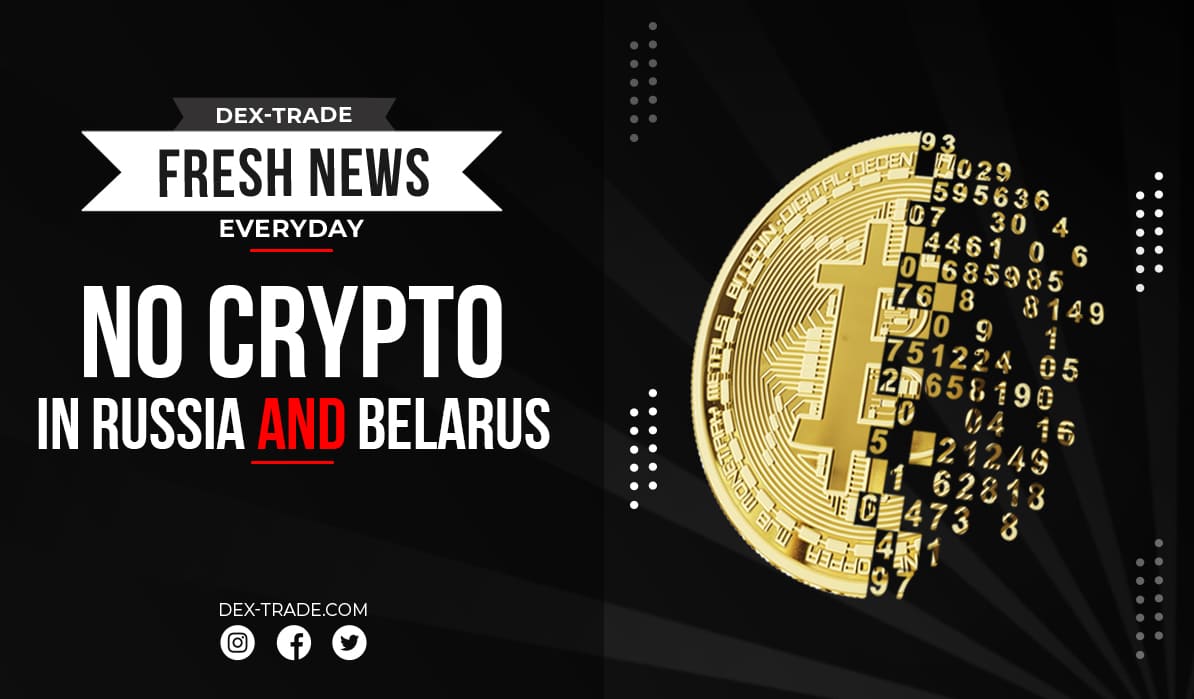 No Crypto in Russia and Belarus: EU Expands The List of Sanctions Against Aggressor States

Representatives of the European Union announced yesterday that digital assets fall under the category of "transferable securities", therefore they are also included in the package of sanctions against the Russian Federation and Belarus, which unleashed a full-scale war against Ukraine. Now, legal entities and individuals from the two aggressor countries, who were blacklisted for supporting the hostilities and war crimes of the Russian army, are prohibited from trading digital assets in the EU. We are talking about 160 people, including 14 billionaires and businessmen working in the most important sectors of the Russian economy. Crypto-ban is the second most important EU sanctions action after the political alliance announced a ban on access to the SWIFT international payment network for a number of Russian banks. The first victim of the sanctions was the largest Russian bank Sberbank. By the way, today the European Union has decided to block several Belarusian banks. According to some experts, Russia may switch to Bitcoin mining, which cannot be limited by sanctions. Even before the war, the Moscow dictator declared that Russia had a "competitive advantage" in this industry (apparently, in the Russian Federation, electricity, like the work of power engineers, will soon become free). Russian businessmen also have the opportunity to trade on decentralized crypto exchanges at their own risk.

Support for Ukraine from the crypto community is growing rapidly, and at the moment, the country, which was attacked by Putin's occupying army, managed to collect about $108 million in Bitcoin and a number of altcoins. So one of the largest NFT-metaverses, Bored Ape Yacht Club (BAYC), on Wednesday joined the list of philanthropists who provided assistance to the Ukrainian people and army. Its developers stated that after successfully collecting approximately $1 million in ETH from the wallets that held the native BAYC coin, they will double the donation by transferring another $1 million in ETH. Cryptocurrency exchange Kraken also announced its intention to donate more than $10 million to customers who create accounts from Ukrainian IP addresses until March 9. In addition, Ukrainian Kraken users will receive $1,000 in BTC regardless of their account balance at the start of the promotion. This amount can be withdrawn instantly, and when withdrawing up to $1000, the exchange will not charge a commission for currency conversion. At the moment, an emergency fund from Binance has already been opened in Ukraine, which since its launch has received about $11.3 million in BTC, BNB and BUSD. The Kuna crypto fund also operates in the country, having raised more than $14 million in currencies such as Polkadot (DOT), Tether (USDT), Candle (CNDL), USD Coin (USDC) and Dai (DAI).

The National Bank of Ukraine received the first tranche from the global Solana community in the amount of $1 million as part of the “Aid for Ukraine” initiative, which is supported by Everstake, FTX, Solana Labs, the Metaplex Foundation, and the Ministry of Digital Transformation of Ukraine. These funds will be spent on supporting the victims of war crimes committed by the occupying Russian forces, restoring Ukraine's infrastructure, as well as on purchases for the Ukrainian army. So far, the initiative has raised approximately $1.4 million, of which $375,000 has come from the Ukrainian company Everstake, the country’s largest decentralized staking provider in the blockchain industry. Fundraising continues, and you can monitor the statistics of receipts in real time on the website of the initiative, as well as on its official Twitter channel. Received funds will be converted with the support of the FTX crypto exchange, which has become the official partner of “Aid for Ukraine”. Recall that non-governmental humanitarian organizations in Ukraine have also opened addresses for crypto donations. They have already raised over $30 million.