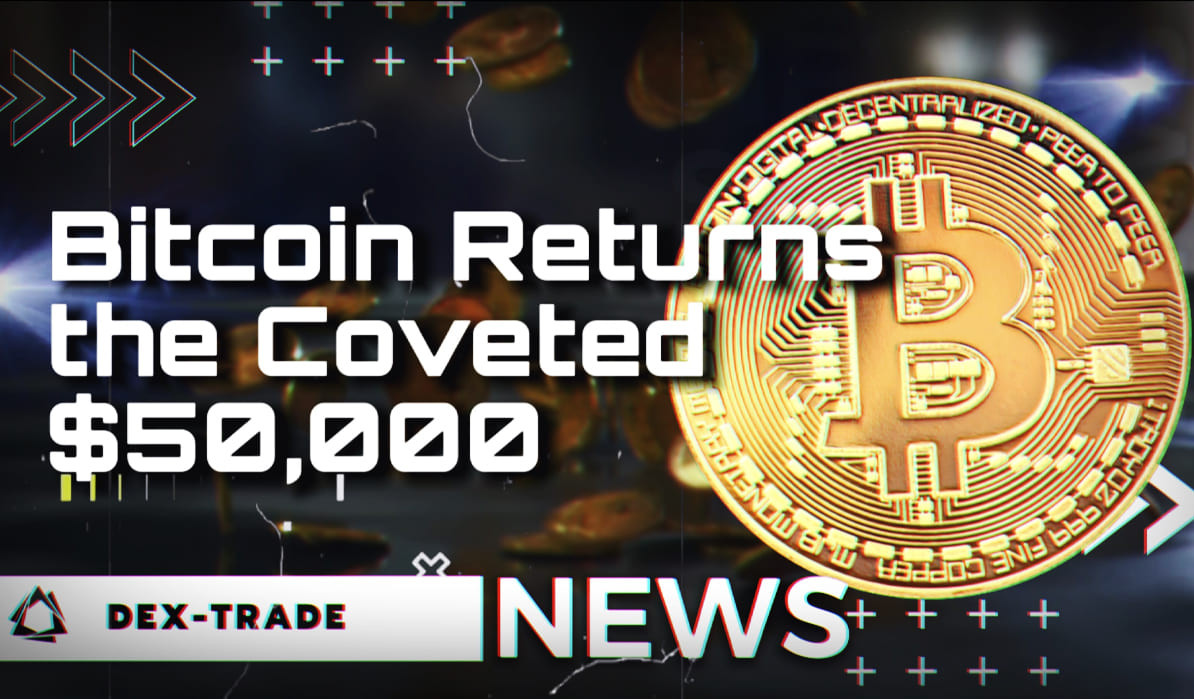 After a series of dumps and yesterday's fall to $46,500, cryptogold began large-scale rallies and returned a key position at $50,000 in just a day. Chaintimes reports. BTC added over $4,000 to its value in a few hours. It also influenced the altcoin market, which is predominantly green today: ETH is pushing towards $4000, ADA is above $3 and DOGE have reached $0.3039. Throughout the week, with the exception of a few unsuccessful breakout attempts, Bitcoin has been steadily losing value. However, yesterday's $46,500 anti-record (on Bitstamp) was a powerful bullish impetus. It is noteworthy that the market capitalization of the main cryptocurrency behaved symmetrically to the price, so it also grew from $875 billion to $936 billion over the course of the day. According to cryptanalysts, the price of BTC is showing positive signs and may well move above $50,000. The close of this trading day above 50K may be an incentive to move towards the $ 52,000 level. However, it should be borne in mind that the main support is still around the level of $49,200. Below it is only the previous level at around $49,000, dropping below which the asset is likely to continue falling.

Cryptoanalytic company Chainalysis made a pre-release of the report on the geography of the distribution of digital currencies for 2021, in which it provided information that Africa and Eastern Europe became the leaders in the use of cryptocurrencies in illegal fraud and economic crimes. Coingape reports. Analysts clarified that the volume of crypto investments and transactions with electronic money in the European region is much higher than in Latin America and Africa. The report highlights that Eastern Europe is the only region where for every $400 million in crypto, 0.5% of total transactions are believed to be related to illegal activity. Western Europe, in turn, leads in the volume of cryptoassets sent to addresses that are associated with cybercriminals. It is followed by Eastern Europe and North America. It is noteworthy that the regions of Western Europe also have the largest number of victims of crypto scams, since the largest number of darknet users is registered here.

The pre-election race for the post of mayor of New York is becoming more and more digitalized, since literally all candidates, as part of their election programs, promise to make citizens rich in Bitcoins. Decrypt reports. Specifically, Republican candidate Curtis Silva said it would make New York “the most crypto-friendly city in the country” and promised to accept taxes, fines and fees from city residents in digital money. Silva's rival, New York Democratic primaries winner Eric Adams, pledged to turn New York into a "Bitcoin hub" earlier this year: “We’re going to bring business here. We’re going to become the center of life science, the center of cybersecurity, the center of self-driving cars, drones, the center of Bitcoins.” — clarified the politician. If these slogans truly, New York will have to compete for Bitcoin hub status with Miami, whose mayor, Francis Suarez, personally oversaw the city's Bitcoin conference this year and is one of the most vocal advocates of BTC in the world.