Results of the 2022 Trading Year: the Bearish Past of BTC, ETH and SOL and Forecasts for Market Recovery

Before saying goodbye to a difficult year in every sense of 2022, it is worth remembering several important events, the consequences of which will affect the cryptocurrency market in the coming year:

The invasion of the rf’s occupying troops into Ukraine.

The war unleashed by the rf’s dictator in Ukraine on February 24 has led not only to a humanitarian, but also to an economic catastrophe on a global scale. Weakened by winter corrections, the crypto market took on a distinct bearish shape at this very moment. Consolidation and global support for Ukraine from the crypto community have become a powerful message for institutional investors. But at the same time, the parallel weakening of classic hedge assets has launched the process of withdrawing capital from the cryptocurrency market.

The collapse of Terraform Labs.

In early May, a very promising algorithmic stablecoin UST, pegged to the US dollar through the LUNA coin, began to rapidly lose value, which led to a collapse in the price of LUNA itself. About $40 billion was spent on restoring the Terraform Labs ecosystem, but these attempts did not produce the expected result. Terra's founder, Do Kwon, is still on the run to this day.

Fighting inflation in the US.

The economic, logistical and energy crises caused by the terrorist behavior of the Russian Federation have led to a record increase in inflation in the United States over the past 40 years. The country’s Federal Reserve Fund moved to a systemic increase in interest rates in the country in order to strengthen the national currency, which exacerbated the outflow of investments from the crypto market.

The long-awaited transition of crypto-silver to an energy-efficient PoS transaction confirmation protocol strengthened the position of altcoins and increased the investment attractiveness of the crypt as a whole. However, given a number of dump events in the industry, the drastic changes in the altcoin flagship blockchain did not have an obvious bullish effect on ETH.

The collapse of FTX.

The November collapse of a large crypto exchange and its subsidiary Alameda Research, which occurred due to the misuse of funds from investors and creditors, was a powerful blow to the credibility of the industry. Many large companies and a number of politicians in the United States are involved in the scandal, and lawsuits involving the management of companies are currently in full swing. It is these events that have shaped the main market trends in crypto in 2022. Well, if we talk about forecasts for 2023, then it’s worth moving on to the specifics.

The price of Bitcoin will continue to fluctuate or trade below current levels over the next 6-12 months, according to analytics platform Santiment, based on recent whale activity, which the company considers an important indicator of a long-term trend. According to the report of analysts, the whales, whose portfolio contains from 1 to 100 thousand BTC, were left without profit. In fact, market experts at Santiment conclude that bitcoin has probably not bottomed out yet. Therefore, they identify two price levels of significant interest to whales due to the volume gap: $14,600 and $12,200. 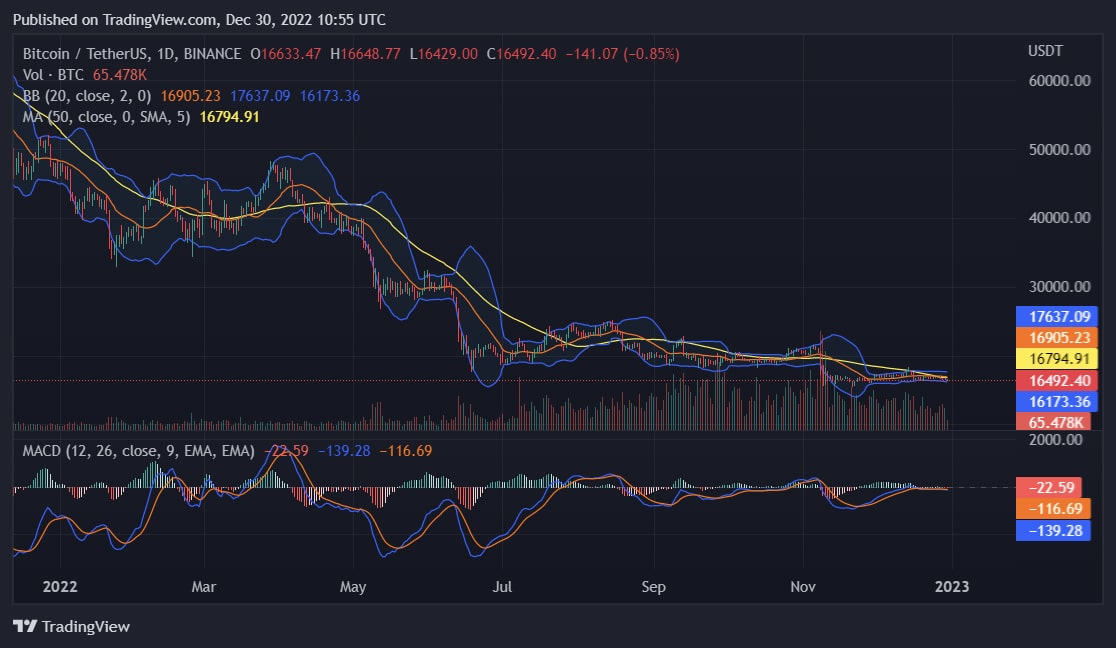 The daily chart shows key BTC dump points throughout the year. The main efforts of the bulls were made from April to May and in August, when the price of the flagship was above the 50-day moving average. Today, judging by the Bollinger Bands, the trading range has narrowed radically, which indicates a possible increase in volatility in the first days of the new year. The main support remains above the level of $16,000, while the resistance of the trading channel is formed just above $17,600. In the coming days, a drop in trading volume is expected, but no radical actions are expected from active players yet. One of the most promising and, at the same time, unprofitable assets for 2022, SOL, was recently supported by ETH co-founder Vitalik Buterin. In this regard, Solana's rate today reached an important mark of $10, after which a correction began and, at the time of writing, the asset is trading at $9.15. However, the latest bounce in the SOL price hints at the possibility of further growth in 2023. 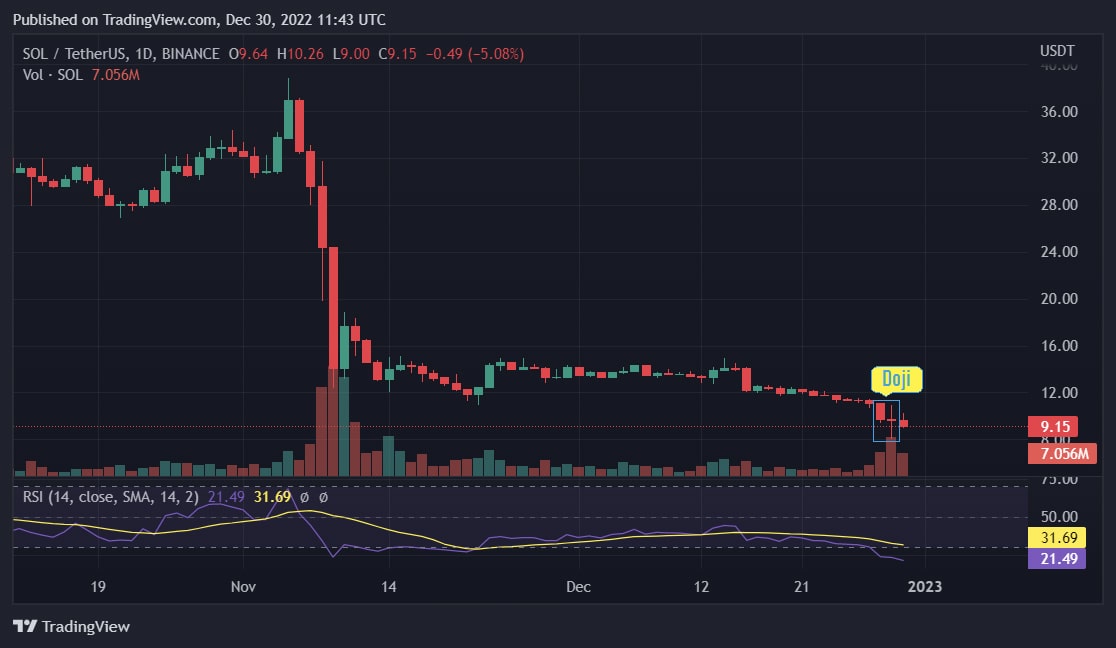 This is primarily due to Doji - a candlestick pattern that forms when an asset opens and closes near or at the same level in a certain period of time. On December 29, SOL formed a standard Doji on its daily chart. From a technical standpoint, a Doji formation during an extended period of an uptrend may indicate a bearish reversal in the process of formation, and vice versa. Therefore, there is hope for a bullish scenario for the asset.