BTC Is Waiting for the Bulls, While ADA and XRP are Shifting Their Attention Away From ETH: Results of the Trading Week and Expert Forecasts

On the charts of almost all major coins this week, a “Head and Shoulders” (H&S) formed, a classic pattern that is a harbinger of a trend reversal. Fortunately, the pattern took shape from Tuesday to Wednesday, so its consequences were expected by the end of the week. However, there were no fundamental changes either in the price of BTC or in the prices of the main altcoins. Just a couple of weeks after the Ethereum merger, the ETH token, which was promised both a fantastic rally and a deafening crash at the same time, has become perhaps the most unsightly asset on the market. The coin is hovering in a price range between $1,240 and $1,394, and any attempts to overcome resistance above the $1,395 zone will guarantee a bounce and a short-term projection. ETH closes the third quarter in suspended animation. However, big changes in the market have been slowed down by the consistent increase in interest rates from the US Federal Reserve and the global economic and political crises. The rhetoric about the use of nuclear weapons in the Russian Federation has finally acquired the outlines of terrorism, and the market, as you know, is a fragile thing. It can be broken with a word.

There has been significant bullish momentum on the Bitcoin chart multiple times over the past few days. As a result, the flagship price is currently $19,494 with a daily low at $18,924. However, some market analysts predict that BTC price will exceed $20,500 very soon. It should be noted right away that the H&S pattern is also clearly visible on the Bitcoin chart this week. But contrary to the bearish forecast, the price of BTC has rebounded from the lows and is now moving towards immediate resistance above $20,000. The bull pressure remains as intense, but Bitcoin has a chance to close September on a bullish note.

Despite the bearish scenario, BTC is still presumably bullish as the 172-day ratio rose above the Ichimoku cloud, giving bullish signals. The Ichimoku Cloud is commonly used to display the support, resistance, momentum and trend of an asset in one view. Therefore, if the indicator is bullish, the price of Bitcoin could rise above the original target of $20,000. Otherwise, if the bears win, their main target will be the $18,500 level, which has been causing problems for the bulls all week.

H&S on the ADA Chart Did Its Job

Cardano has lost less than 1% in a day and is now trading at $0.435. It's also up 2% from ADA's seven-day low of $0.427901, signaling a rebound in the asset after this week's sell-off driven by the ongoing macro downturn. In terms of fundamentals, ADA arguably remains one of the strongest cryptocurrencies on the market given the depth and breadth of the Cardano ecosystem, which continued to grow even during the 2022 global bear market. 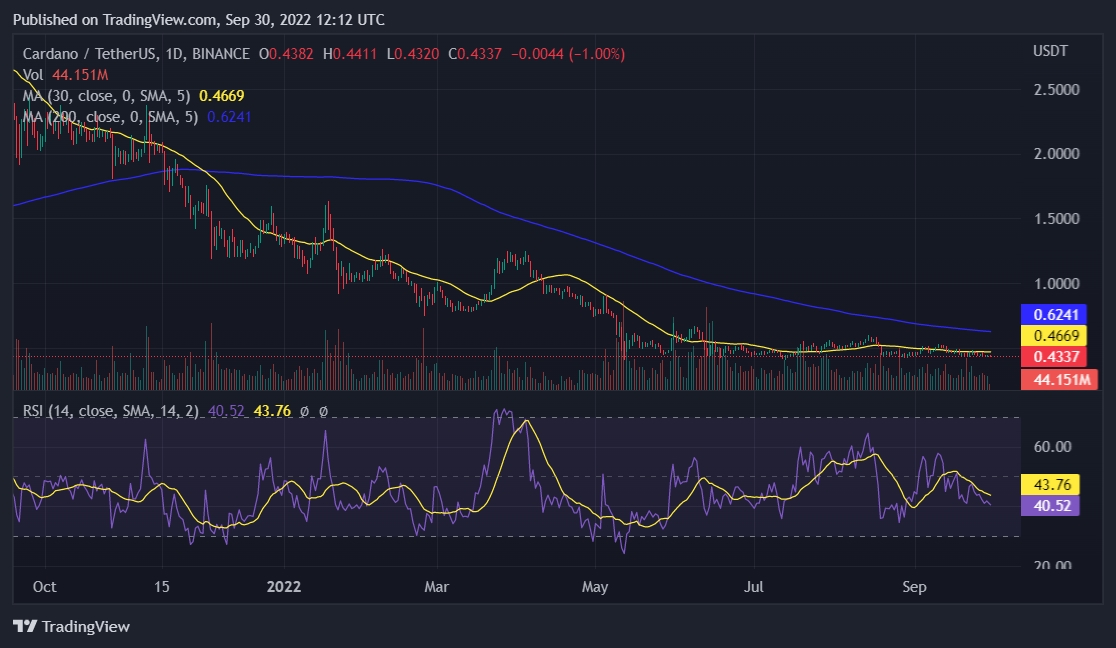 The RSI ADA shows oversold conditions, which confirms the bearish dominance. However, the 40 is not catastrophic and the awakening of the bulls must occur. The 30-day moving average (yellow) is below the 200-day moving average (blue), indicating that there is more chance of a rise rather than a further fall. ADA is characterized by a sharp and short-term growth, however, at this stage, the coin is preparing to move from a falling phase to a long-term growth phase, as the Vasil update for the Cardano blockchain turned out to be more attractive to investors than even the long-awaited Ethereum 2.0.

Due to the news that the SEC lost the Hinman documents privilege claim in the lawsuit against Ripple, XRP skyrocketed by 10%. As of press time, XRP is trading at $0.47 and trading volume has risen noticeably over the past 15 hours. Ripple has scored another big win and this clearly speaks of the high potential of XRP. Specifically, market analyst DonAlt saw an opportunity for the coin to rise by more than 600% compared to the current price and set a price target for XRP of $3. 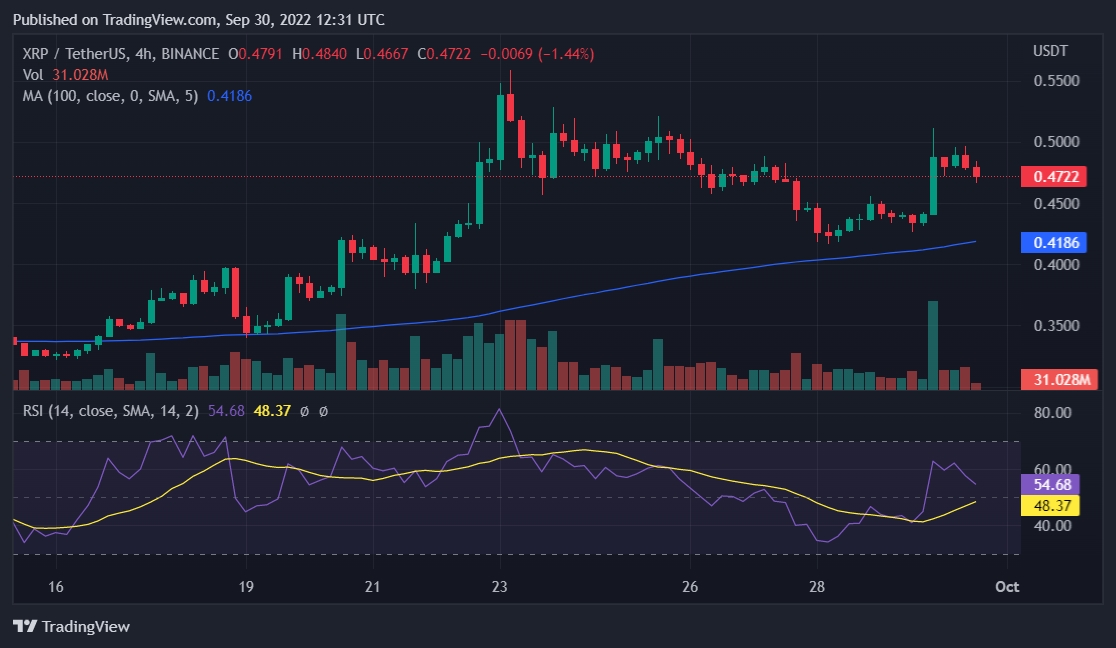 On the 4-hour chart, the 100-day moving average indicates a resumption of growth and there is still room for this. In the near future, the coin is likely to face a correction, but fundamental factors will continue to provide initiative to buyers. The RSI has temporarily subsided, but the reading of 54 still speaks of the short-term dominance of the bulls, whose key task now is to consolidate above the $0.5 level.