"Death Cross" of BTC, "Slippery" $3000 on the ETH Chart and Enviable Prospects for DOGE: Results of the Trading Week and Experts' Forecasts

After several weeks of serious "shaking" on the market, relative calm seems to have triumphed. This is not a synonym for strong growth and not even a reason for optimism, but the current state of affairs is an excellent "bell tower" from which analysts can more accurately predict the further movement of assets. The really bright and unpredictable event during the week was, perhaps, only the news that the darling of the entire technology-oriented community of the planet, Elon Musk, acquired 100% of Twitter shares. Of course, this was a serious boost for the entrepreneur's favorite coin — Dogecoin. But, as you know, “nothing lasts forever under the Moon”, so DOGE survived a rise to $0.1667 and a natural rollback to $0.1405 in a matter of days. We should also not forget that the russian war against Ukraine continues to have an impact on the crypto market. The growing level of aggression of the russian dictator putin and war crimes against the Ukrainian people that are not commensurate with common sense are inciting more and more people to invest in cryptocurrencies. This is a natural process in a situation where classical financial and economic systems fail, and their expediency is being actively reviewed. Digital money still has a fairly strong growth potential in the long term. Well, what exactly and where exactly is moving — let's see further.

After falling from the $44,000 position, the price of Bitcoin bounced along the uptrend line, then crossed it and reversed, giving all the signs of the start of a bear market. After that, literally every attempt to restore the levels failed, so the price got stuck in a deep bearish well. According to analyst Lark Davis, there is now a high probability of a fall in the price of BTC by more than 50%, as he predicts the imminent formation of the “Death Cross” pattern on the chart. This has already happened in 2015 and 2019: when there is an obvious bearish event on the 3-day chart, the price of BTC drops by more than 50%. This means that the price of the asset may soon fall again to $25,000. 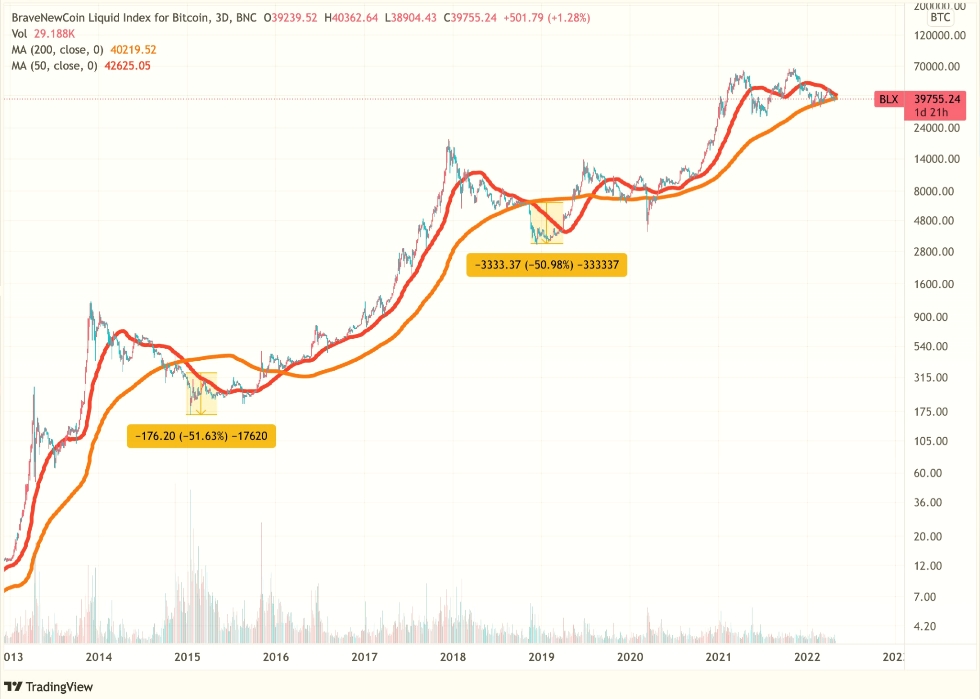 But market analysts reacted to this forecast ambiguously. Some of them actively agreed, but predicted a bottom at $28,000, while others actively argued that the “Death Cross” cannot greatly affect the price of BTC. However, representatives of the second position still predict a significant drop in Bitcoin due to an abrupt increase in the hash rate of the coin. Both options are not too optimistic, but until the cascading sale of crypto-gold begins, outright pessimism can be left on the top shelf.

$3,000 Is The Peak Where ETH Cannot Yet Gain a Foothold

It should be noted that while the price movement of Ethereum is clearly bearish and the coin risks falling below the $2900 level. Over the past 24 hours, the asset has been trying to jump to the $3,000 mark, but it looks like the downtrend will continue in the short term. So far, the main support for crypto-silver remains the range around $2800. At the same time, the coin’s trading volume over the past 24 hours has grown by 7.10%, capitalization has increased by almost 0.82%, and market dominance has jumped to 19.50%, since now the ratio of volume to market capitalization is 0.05255. 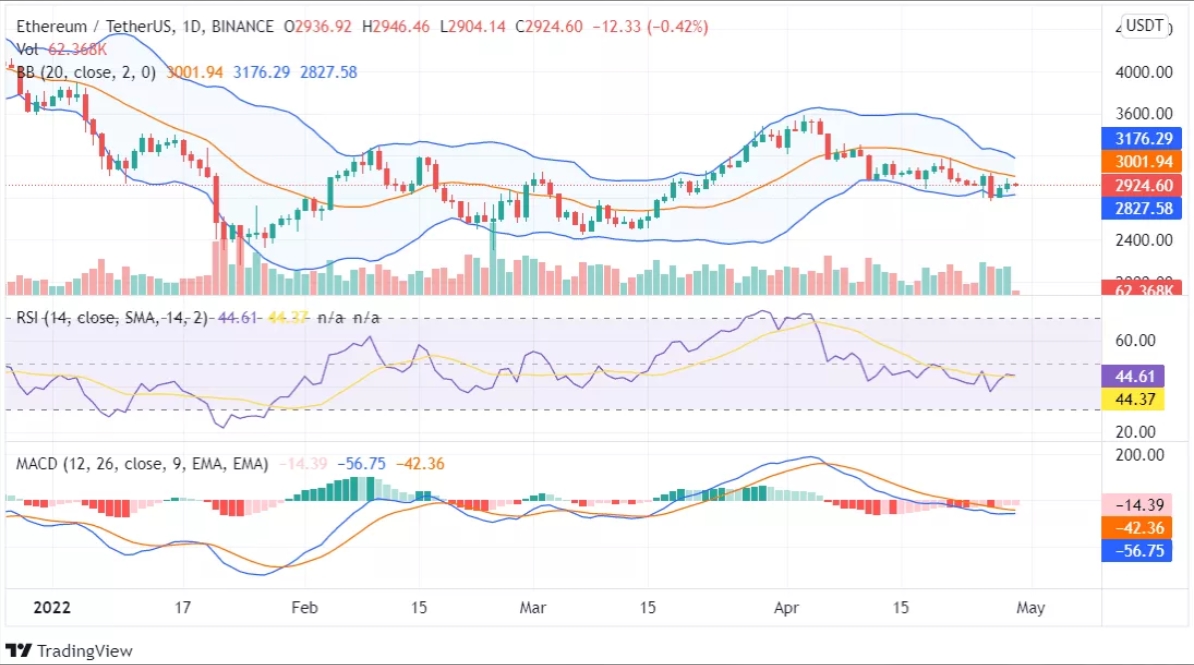 As for the technical indicators of ETH, the RSI is now below 45, that is, the coin is oversold and in the short term its price will continue to fall. At the same time, the MACD line and the signal line are gradually approaching each other, as there is some bullish divergence. But the price action of the coin is at the bottom of the Bollinger Bands, which means that a bearish breakout is highly likely.

Analysts predict a relatively optimistic future for Dogecoin, although the coin has already begun to fall below the level predicted yesterday. However, over the past 24 hours, DOGE has lost about 1.6%, while weekly changes remain positive, showing +1.14%. Now the coin is trading at $0.1385 and analysts say that another bounce from support at $0.13 is coming. 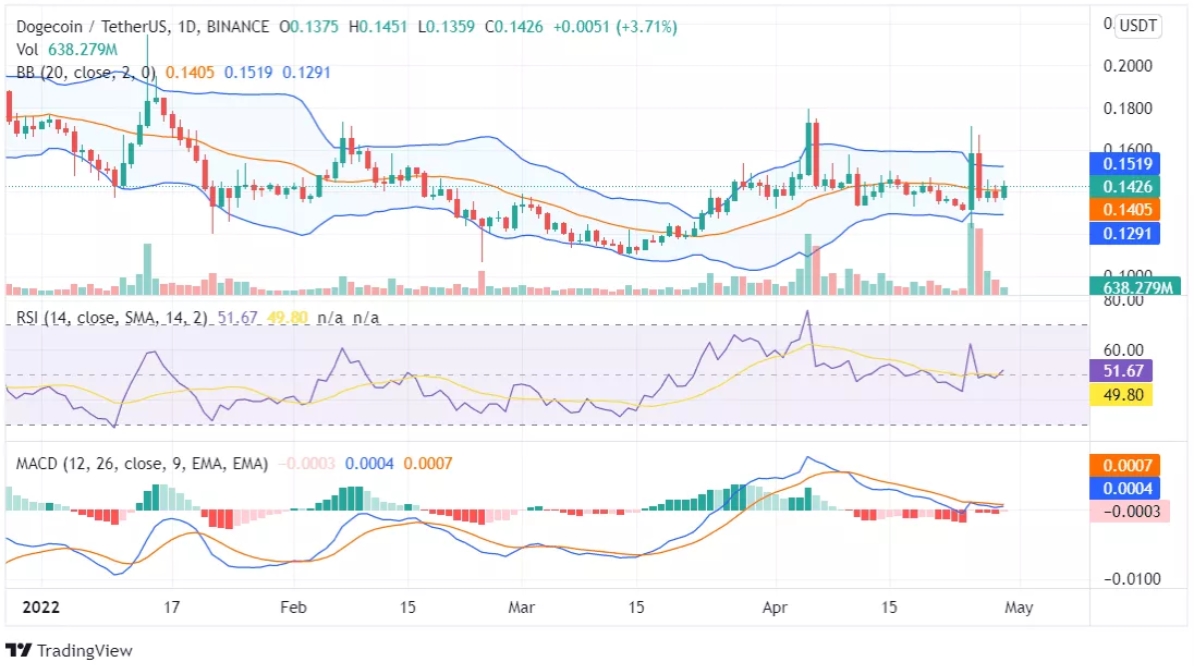 And some technical stuff. The MACD line on the chart remains below the signal line — the MACD histogram is bearish. The RSI drops below 52, which means that bull dominance is waning, but judging by the gradient of the line, the price may rise. But DOGE price action is already below the bearish area of the Bollinger Bands and is currently retesting the middle zone of the bands.