“High Hopes” BTC and ETH vs. Prospects for XRP, DOGE and BCH: Results of the Trading Week and Expert Forecasts

The sluggishly started trading week in the crypto market stopped being boring on Wednesday, when key digital assets received an almost synchronous momentum and market capitalization crept up. Moreover, many market analysts have been predicting a short-term thaw since last week, but its actual impact on the market is still extremely difficult to predict. After fixing above $20,000, BTC began to steadily move towards the Rubicon at the position of $21,000, but at the end of the week during the Asian session of the flagship it was dropped to the level of $20,244, which led to a drawdown in the capitalization of the coin. However, analyst and trader Jason Pizzino believes that bitcoin's fall to $10,000 could be avoided if it rises quickly above its August swing high at $23,000. By analogy with the flagship, Pizzino believes that a dramatic collapse of ETH is also unlikely, since the strength of the asset’s movement exceeds the dynamics of BTC and crypto-silver is now “pumped up” with investments, which potentially accumulates a resource for a throw to $1,500, that is, above 50% of the Fibonacci zone. But despite the optimism of analysts, macroeconomic factors still rule the market of giants, so today we will consider the status and prospects of popular altcoins, which are less dependent on global troubles and retain the potential to grow or consolidate in their positions based on current data.

XRP Hodlers in Anticipation of the "Finest Hour" Next Week

XRP has been stuck between Fibonacci support and resistance ranges since October 9th. In the middle of this week, the asset stalled and failed to overcome the resistance around $0.53, just below the level where it faced high bearish activity in September and was pushed back to $0.42 in just a week. The coin has been trading in the same range for more than four weeks. The last retest of the lower range occurred on October 20, after which the price began to rise gradually. But the lower range has also been reinforced by the Fibonacci retracement at 0.236 and XRP could well add another 11% to the price before retesting the 0.382 Fibonacci level. 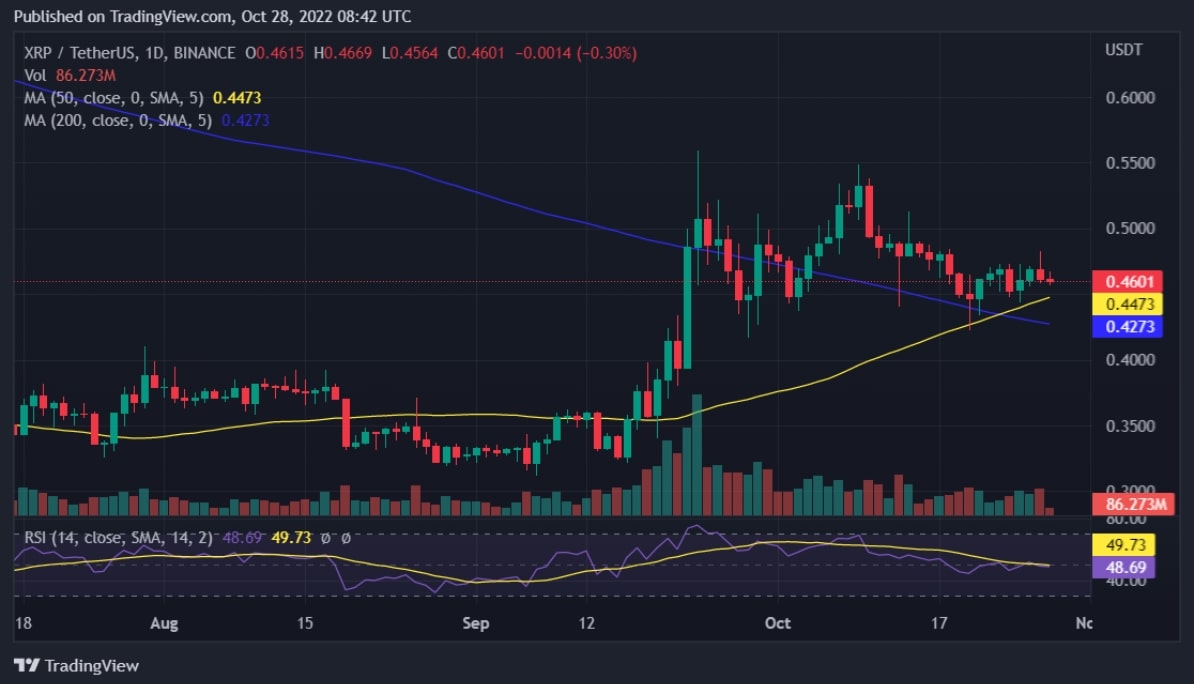 The last bounce in the price of the coin occurred on the 200-day moving average, after which the so-called golden cross formed — a stable pattern, which is characterized by an upward intersection of the 50-day and 200-day MA, which is considered one of the key bullish signs. In addition, the RSI has been moving within an ascending support line throughout the week, meaning XRP's relative strength is rising in favor of the bulls. But it is worth considering the activity of coin development, which continues to decline, hinting at an unexhausted bearish resource.

DOGE Is Hyping Again, but for How Long?

The main meme-coin is growing for the second day in a row and today reached a new monthly high at $0.08544, that is, the weekly increase in the price of the coin was more than 37.5%, while the trading volume during the day increased by more than 112%. The main driver of the exponential growth, traditionally for DOGE, was the news about the main backer of the coin, Elon Musk, who this week completed the purchase of Twitter and settled into his new chair of the company's CEO. But, as practice shows, the “Mask effect”has an extremely short-term nature. 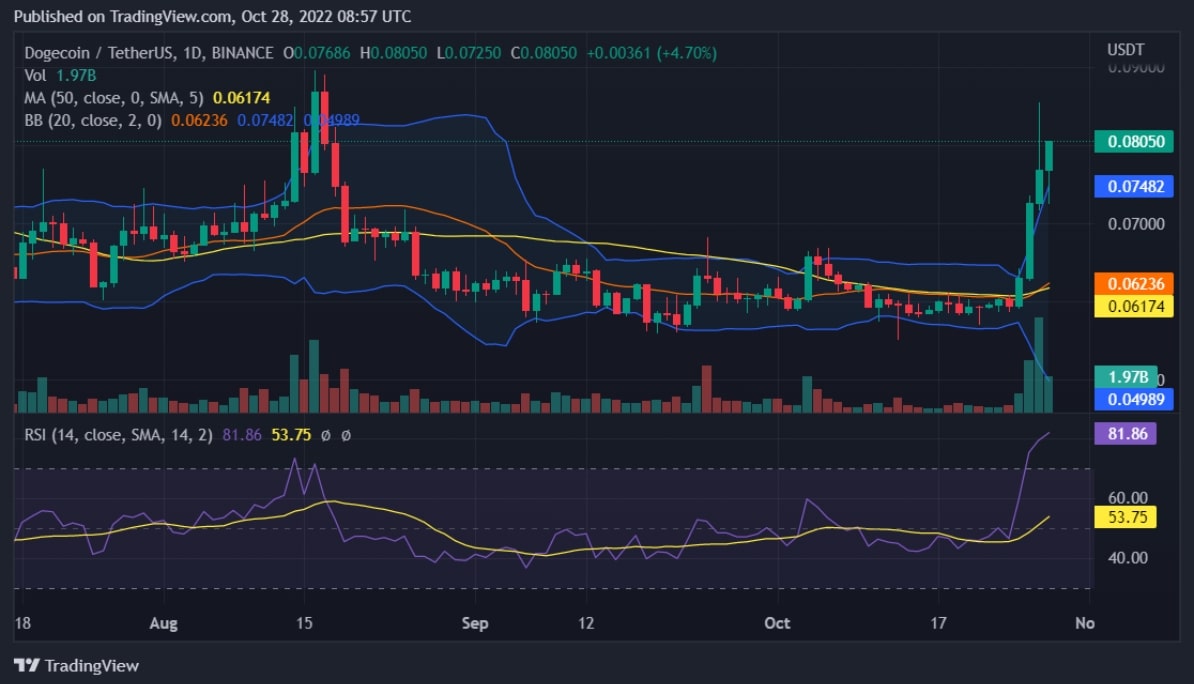 Over the past day, traders closed about $8.69 million worth of Dogecoin futures, according to Coinglass, but most of the selling (78.81%) was due to unsuccessful short positions. However, at the time of writing, the price is trying to gain a foothold above $0.0800, but the hype is quickly subsiding, and the fantastically high RSI is already hinting at a reversal from the overbought zone. However, the Bollinger Bands indicate an expansion of the channel, so we should expect a regrouping of the main support and resistance levels. Ideally, the correction should pass around $0.0700, and further growth will directly depend on fundamental factors.

During the week, BCH formed a decent support base above the $104 level and began a recovery wave to the resistance at $110, which was also successfully overcome. The resistances at $112 and $115 were also successfully overcome, after which the price corrected to $112. In fact, during the week, the BCH/USD chart moved below the Fibonacci 23.6% retracement level from the swing low of $103 to the high of $118, for a weekly gain of 7.6%. 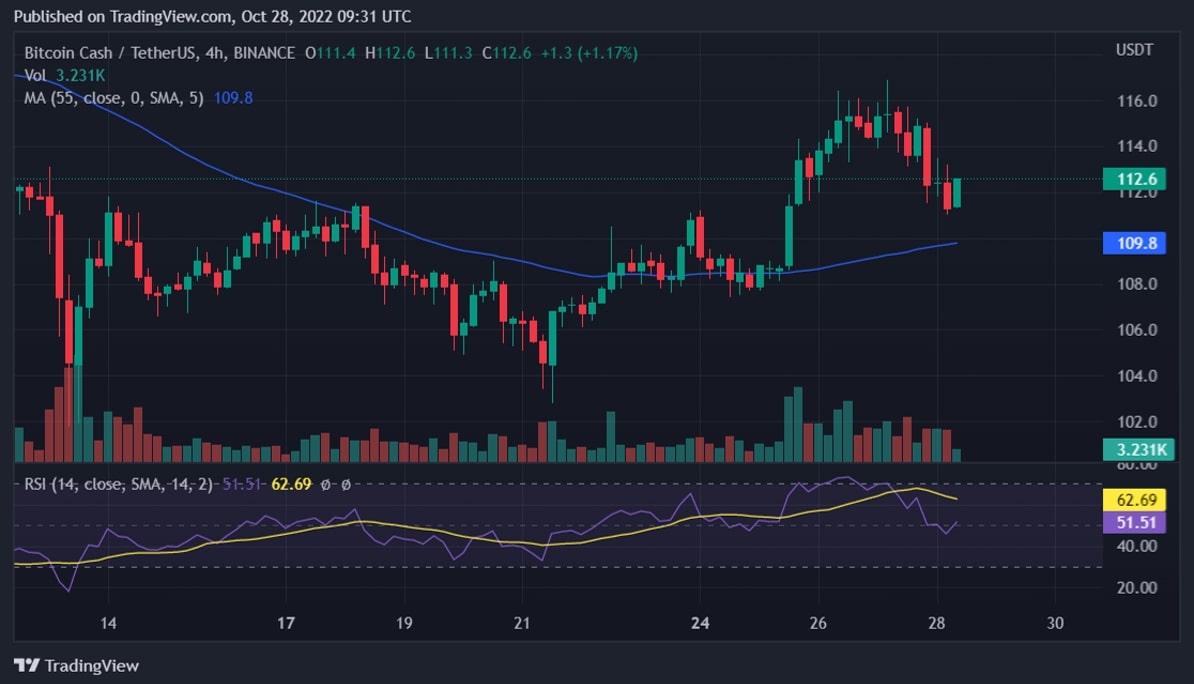