BTC “Goes in Circles”, High Volatility of ETH and Bears in the DOT Market: Results of the Trading Week and Expert Forecasts

The outgoing week on the crypto market was marked by high volatility of key assets and repeated attempts by bulls to gain a foothold at the nearest support levels. Moreover, this applies to both the flagship of the market and altcoins, since their interdependence began to recover in parallel with the growing concern in the community due to the trial of Alexey Pertsev, the developer of Tornado Cash. Investigators suspect Pertsev in cooperation with the FSS RF and financial fraud in favor of the terrorist state. Given the fact that Tornado Cash is based on Ethereum, the largest altcoin does not seem to be able to avoid reputational losses. At the moment, Vitalik Buterin is openly opposed to crypto censorship and supports the open source community. However, the seriousness of the allegations against Pertsev could exacerbate the market crisis and hit asset prices severely. At the same time, the market is experiencing a traditional Friday decline and prices for key assets are almost symmetrically returning to local support levels. Selling pressure continues to build, but due to sluggish trading over the weekend, no major crashes or rallies should be expected. Probably, the bulls will try to gain a foothold at compromise price levels and accumulate strength until next Monday.

BTC Is Struggling for $21,500, But the Stimulus Is Clearly Not Enough

During the week, Bitcoin survived 9 attempts to gain a foothold above the $21,500 level, each time rolling back to supports in the $21,000 area. Twice a week, the price fell even below this level, forming a local bottom near the $20,955 mark, which is currently the minimum of the weekly movement, where the bears are no longer able to continue the decline. The bulls, in turn, used every opportunity to build strength, as the key breakout at the moment will only be rising above the $22,000 position, where the main resistance is now located. If buyers manage to gain a foothold above this level, the flagship, with a high probability, will be able to continue to grow. 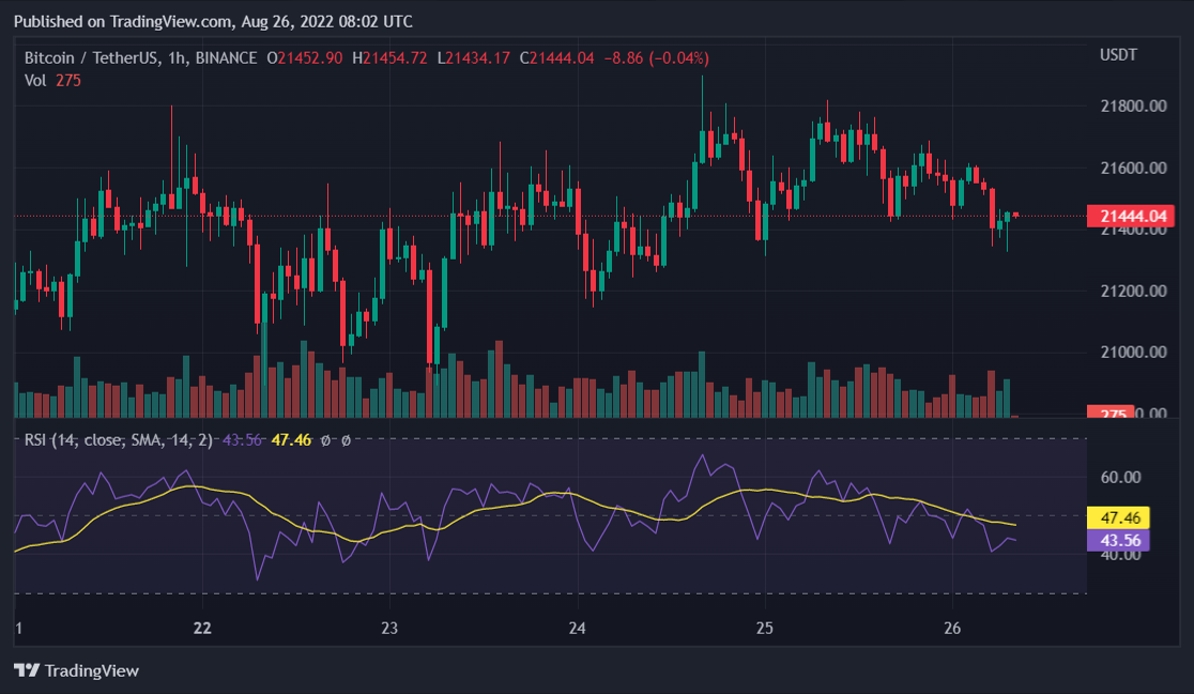 RSI indicates an increase in selling pressure, so in the near future, market experts expect price consolidation, after which one can expect a change in market dynamics. But it’s important to take into account the fact that the flagship is now directly dependent on macroeconomic surges. The decline in the price of Bitcoin is also associated with the fact that the crypto community is now waiting for the speech of Fed Chairman Powell Jackson Hole at the annual symposium of the government agency. Hole will talk about new measures to restore the country's economy, which could negatively affect the digital asset market.

ETH Looking for Momentum to Break $1,700

A similar situation is observed in the crypto-silver market. During the week, ETH started an upward correction above the $1,650 resistance zone, climbed above the $1,660 and $1,675 levels, and briefly moved into a sequential upside zone. On Thursday, the asset repeatedly broke above the $1,700 level, and the trading day was closed above the 100-hour simple moving average. ETH price even climbed a few pips above the 50% Fibonacci retracement level of the key decline from the $1,880 swing high to $1,525 low. 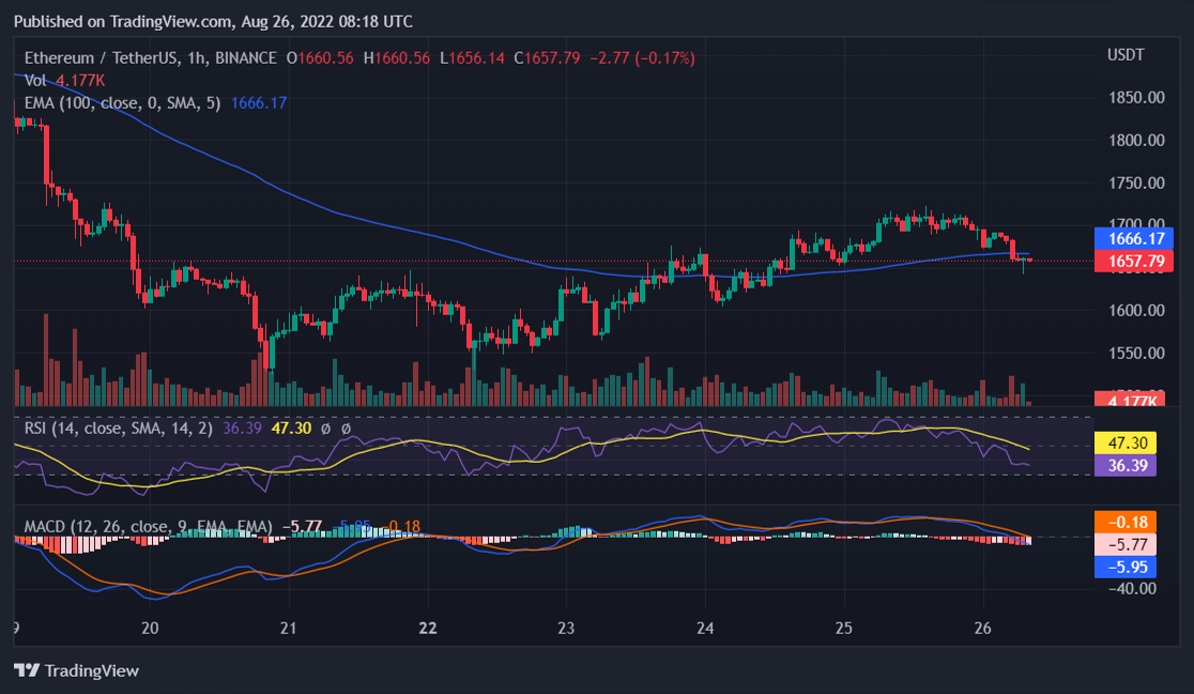 The Bearish Trend on the DOT Chart is Getting Worse

The bearish trend in the DOT market is gaining momentum as the price of the asset falls below $7.55. During the week, the coin crossed the $7.74 mark twice, but under pressure from the bears, it returned to support at $7.49. The main resistance level for DOT/USD remains at $7.74, but the immediate support has now moved to $7.32, and if DOT falls lower, the movement could continue to $7.05. 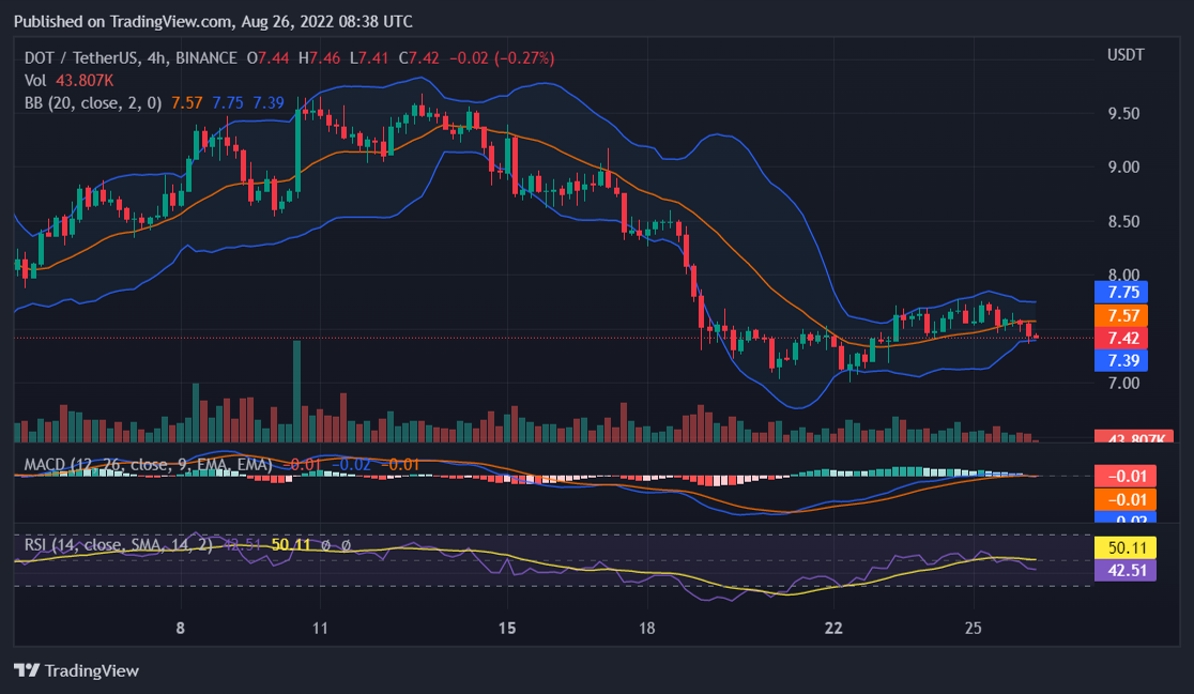 The DOT trend is expected to remain bearish in the short term as the MACD indicator moves below the signal line, which is a bearish sign. The RSI fell below 42 and is approaching oversold levels, which could lead to a drop in the asset to $7.35 in the near future. The Bollinger Bands of the DOT/USD pair are narrowing, which indicates that the market is in a state of consolidation, so we should not expect bullish breakouts in the near future.