BTC and ETH Celebrate Black Friday, and SOL Protects the $10 Level: Results of the Trading Week and Expert Forecasts

For three weeks now, the market has been struggling with the dramatic consequences of the collapse of the FTX crypto exchange, but so far it has not been possible to overcome the bears. Since last week, many bitcoin evangelists have taken to promoting the flagship, creating industry support funds and loud slogans about “BTC at 1,000,000” already in the first quarter of 2023. Yesterday, the founder of ARK Invest, Cathie Wood, joined the “clan of optimists,” who shared a forecast that Bitcoin will cost $1 million by 2030 and will emerge from the current trouble “smelling of roses.” By the way, the entrepreneur’s investment fund continues to actively buy Coinbase tokenized shares, so her market leader rate is quite natural. The darkest day of the outgoing trading week was Tuesday, when key digital assets lost an average of about 5% of their value, and bitcoin broke through support at $15,650 and briefly touched the bottom at $15,475, which became a monthly anti-record for the crypto. The event has been linked to "stranger things" by FTX management and a tsunami of tweets from Sam Bankman-Fried (SBF) who apparently dodged questions about embezzlement of FTX clients' funds. Market experts tend to believe that the main factor in the continuation of the bear market at the moment is the consistent fall in confidence in the crypto industry of investors with “big wallets.” However, if everything were so simple, then the crypto-winter would have been overcome long ago. So let's get into the details.

BTC Bounces off $16,500 and Looks for a New Defensive Line

At the time of writing, the flagship crypto is worth $16,442 and continues its downward movement after yesterday's weekly peak at $16,754. BTC has fallen in price by almost 1% in a day and all indicators that showed a price recovery yesterday turned in favor of sellers. The bears that have gained dominance are targeting $16,000, where most of the recent buyers are concentrated. However, judging by the week-end decline in trading volume, this position will not be reached until the start of a new trading week, and the bulls will focus on support in the $16,150 area, where the flagship “trampled” on Wednesday. 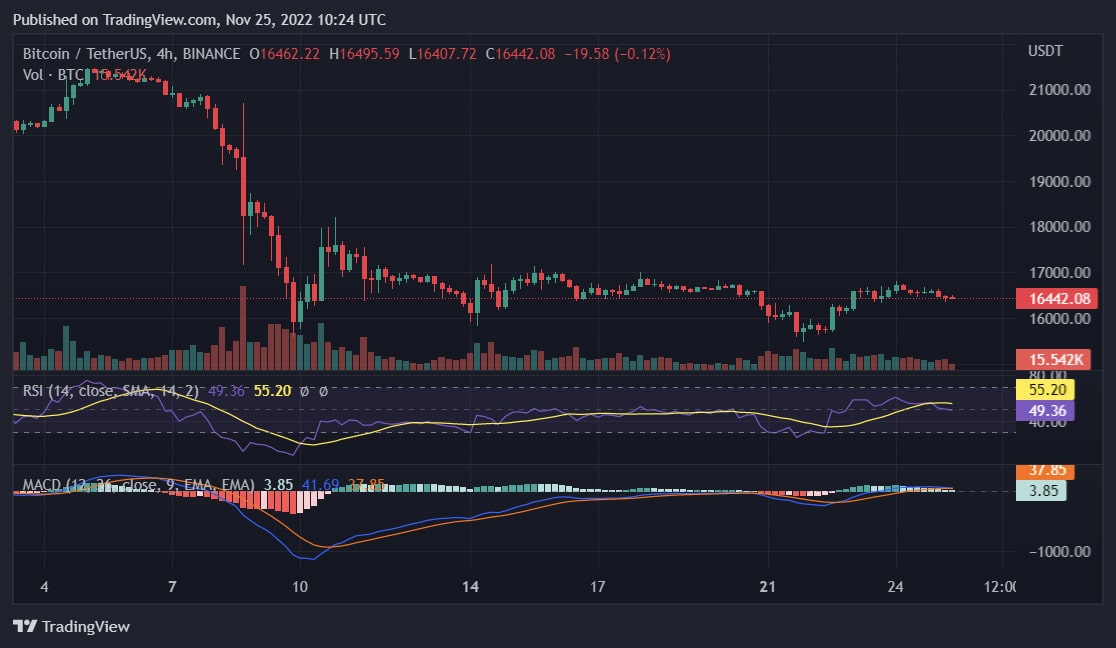 The 4-hour chart shows that the RSI is moving into the neutral zone and heading towards overbought, which is an indicator of the bearish potential that has not yet been realized. In fact, after the big November slump, BTC is forced to recover any price level through significant value consolidations. On the MACD chart, we also see a gradual “cooling down” of the bulls, although during the week they nevertheless managed to take the initiative. In fact, after a hard race, BTC is stuck in a narrow price range, which should expand with the start of a new trading week.

After a massive fall on Tuesday-Wednesday, crypto-silver was able to recover to $1,200 already on Thursday. However, after 8 hours of trading just above this important level, the bulls failed to gain a foothold and increase the volume of purchases. At the time of writing, ETH is trading at $1,184 with a loss of approximately 1% over the past day. However, on Tuesday, the bulls managed to protect crypto silver from falling below $1,000, which can be considered the main merit of buyers during this period. Despite the fact that the asset is more susceptible to hits from fundamental market changes than bitcoin, its potential for recovery is still significantly higher.

However, the buying initiative is still not enough as we see the 50-day and 200-day EMAs align and will soon be in parallel. At the same time, a reversal of the 50-day line to the north will be the first indicator of a bull race. The RSI on the ETH chart is returning to the neutral line and is likely to stay near it over the weekend. It will take not just buying pressure, but a miracle to realize a bullish breakout. However, analysts believe that the return of $1,200 over the next week is a very realistic goal.

Since “Black Tuesday,” the SOL has risen markedly as the bulls managed to defend a key position at the $10 level. As soon as the support was successfully tested, the growth of the asset began. However, today there was a reversal and the price fell to $14.16, although the recovery continued later. Based on the 4-hour chart, SOL is still sensitive to negative market sentiment. Price levels are steadily declining, and there is a strong possibility that this will continue in the future. 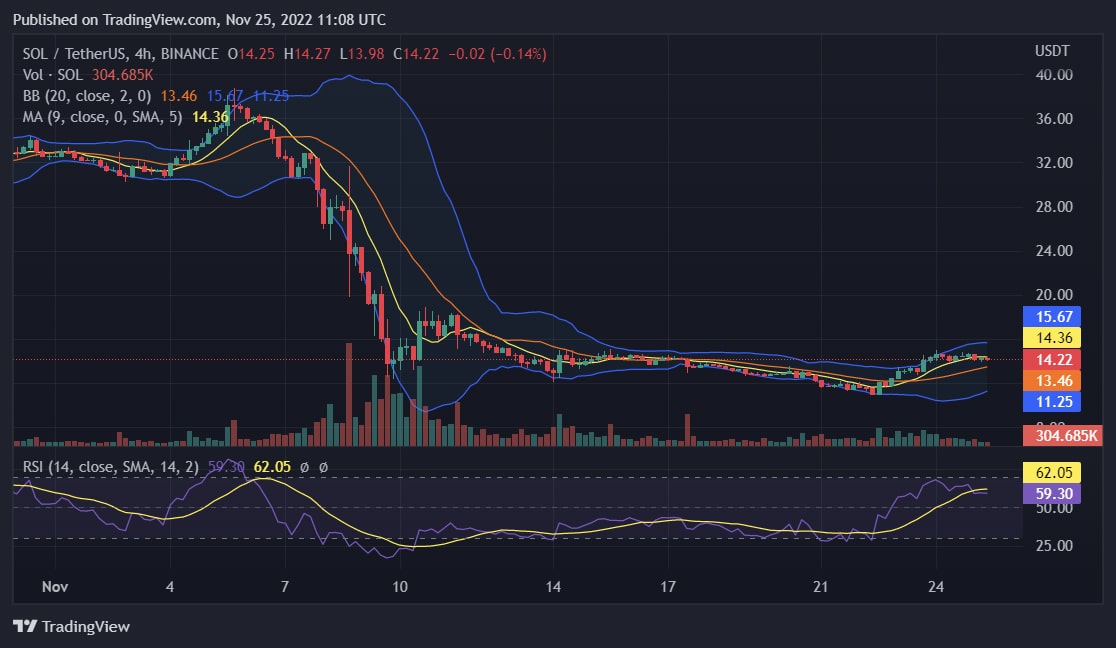 Over the past few hours, SOL volatility has weakened and risen, which is a rather unfavorable indicator in the short term. On the other hand, the Bollinger Bands are holding their mean at $14.22, with the lower band showing increased support around $11.25. Given the RSI rise from 56 to 59.3 in just a few hours, we can talk about the activity of buyers. However, it is still not enough to start the rally.