Today we will move a little away from the flagship of the crypto market, information about which already oozes from every iron. We only note that the price of BTC has finally received a stable growth dynamics and is moving in parallel with the growth in trading volume and the capitalization of the coin. Bitcoin is currently trading at $23,131, which is a pretty good price considering that just yesterday Tesla sold 75% of its Bitcoin fund, which could have had a devastating impact on the market, but it didn't. However, over the past few weeks, there has been a separation of the altcoin market from the flagship. The main reasons for this trend were a sharp change in the attitude of the European Bank towards crypto, working on the Proof-of-Work (PoW) protocol and the upcoming transition of crypto-silver to Proof-of-Stake (PoS). It’s too early to talk about the moral obsolescence of PoW, but the environmental and power problems associated with the mining of digital currencies based on it are already quite real. While BTC is showing 11.6% growth for the week, ETH reaches a fantastic 32.3%, which puts the altcoin in the fifth position among the leaders of weekly growth. At the same time, market capitalization has consolidated above $1 trillion since the beginning of this week, which means that the favorites of investors are once again strengthening their positions. Let’s talk about this.

ETH Hints at a Rally to $1700: Will the Bulls Take Up Such a Challenge?

Crypto-silver has begun a downward correction, which may briefly return the asset below $1,550. However, within a week, ETH built a range from $1,332 to $1,622 and even tested support at $1,465 and the 100 hourly simple moving average. Now on the ETH/USDT chart, a critical bullish trend line is forming with support near $1,520. The bulls are actively building up strength to fix the price above $1,600. Now experts are talking about a confident overcoming of resistance in the $1,550 area. There was a movement above the 50% Fibonacci retracement level from a swing high at $1,622 to a low at $1,464. 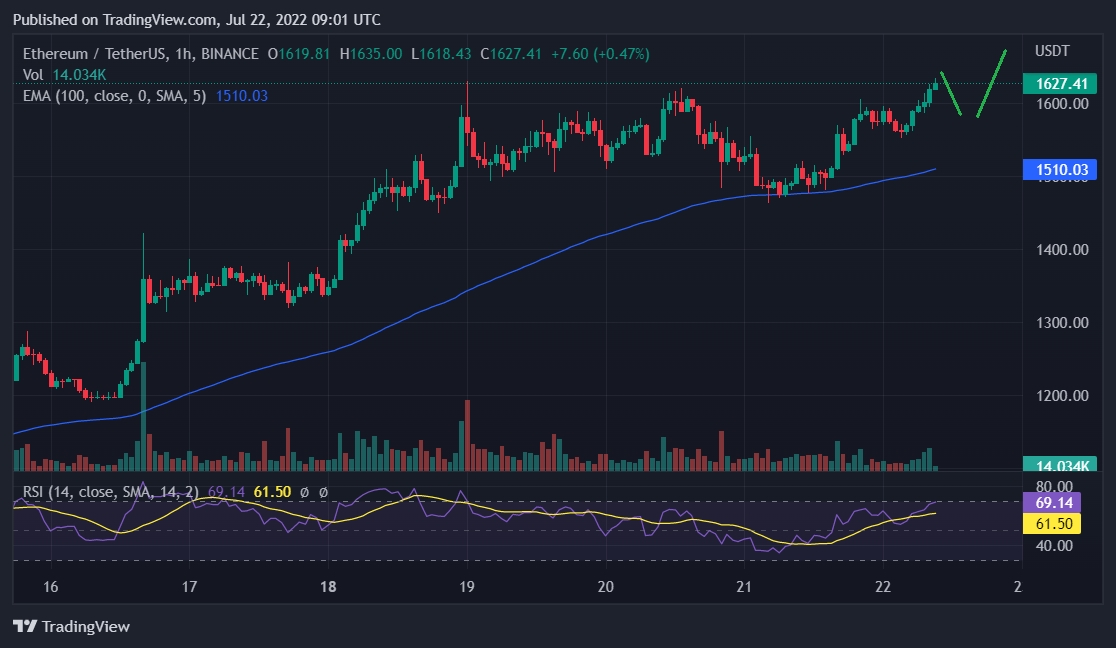 The first major resistance lies near the $1,600 zone. The main breakout zone is now forming near $1,620. A clear move above this level could lead to another significant upside. The next key target now is the $1,700 level, above which the price may approach the powerful resistance zone at the $1,800 position. If ETH fails to hold above $1,600, the next supports will be $1,520, $1,465, and $1,375. However, judging by the RSI, the buying rush in the crypto-silver market continues to dominate the selling pressure and this situation may become a sufficient foundation to generate a powerful bullish momentum.

SOL at Eight-Week High and Waiting for Bullish Instructions

The SOL's descending channel was finally interrupted by a breakout this week. After closing above the 20-EMA and 50-EMA, buyers have shown dominance in the current price action pattern. However, a drawdown below the 50 EMA may delay the long-awaited rise of the coin. Now SOL is trading at $44.25, adding 4.60% to its value per day. The long-term downside channel of SOL brought it to a base level around $28 until mid-June. A short-term buying rally was interrupted by market volatility. Over the past two months, the Fibonacci resistance at 61.8% has been heavily holding back growth. But after the breakout, the bulls began to recover their strength.

If we see a clear bounce off the 50 EMA, it could be considered a confirmation of a bullish hammer on the daily time frame. In this scenario, the bulls' potential main targets would be in the $46 — $47 range. But the inability of buyers to cause a strong rally can only provoke sellers to delay the sluggish price movement.

DOT Continues to Live Up to Investors' Expectations

DOT is now in the midst of a bullish trend and is trading above $7.63, where there was strong resistance just a few hours ago. It looks like the bulls are targeting the barrier around the $8 level. But if the price fails to gain a foothold above $7.63, experts predict a rollback to $7.25. During the week, the coin was on the rise and rose by more than 13%. However, the uptrend was interrupted on Wednesday and prices returned to the $7.2 level. However, DOT is now valued at $7.83, market capitalization has returned to $7.72 billion, and daily trading volume has fallen from $511.7 million to $457.8 million. 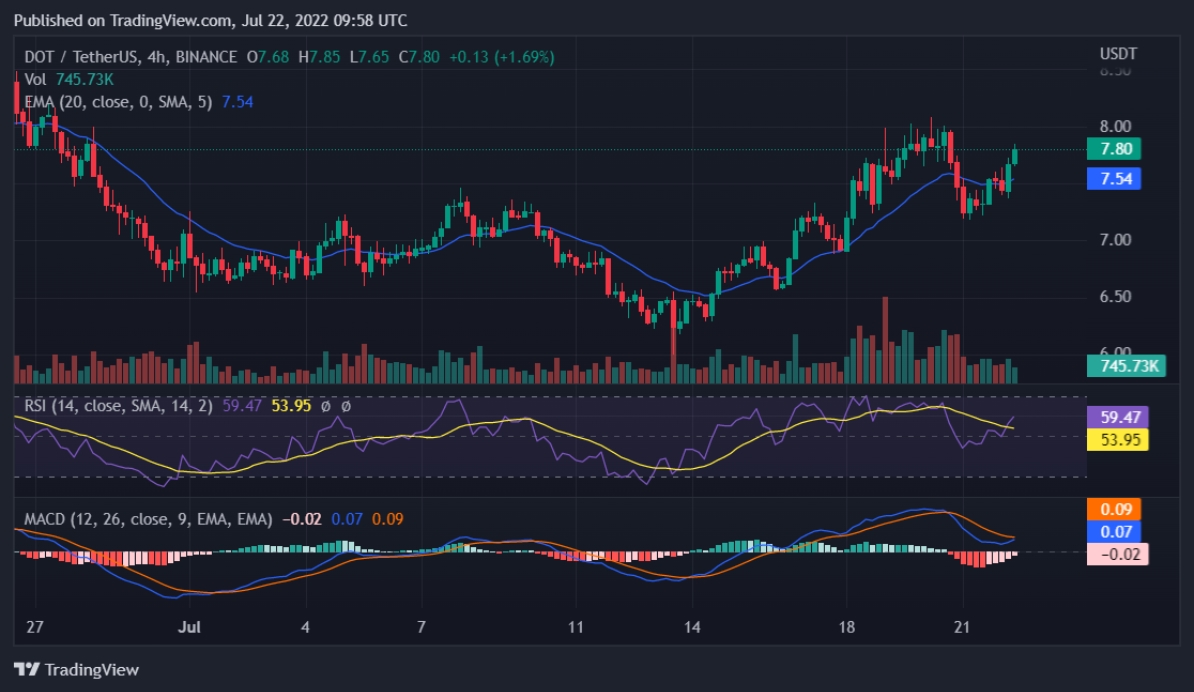 The four-hour chart shows that DOT positions are weakening below the resistance level at $7.63. However, the RSI is turning north, indicating that the bulls are in control. At the same time, the MACD is close to the signal line, the crossover may lead to a price return to $6.80. But 20-period EMA is currently at $7.54 and support is already consolidating at this level. It looks like we’ll see another DOT rally after all.