BTC and ETH Are Trying to Change the Rules of the Bearish Game, and BCH Is Increasing Losses: Results of the Trading Week and Expert Forecasts

The bearish trend of the main digital assets continues in the fourth quarter of this year. But despite the sad market realities, analysts regularly work out trend reversal scenarios that, in some cases, look super optimistic. However, market stability is still better than stagnation. For example, the CEO of Galaxy Digital, Mike Novogratz, believes that the dependence of Bitcoin and Ethereum on macroeconomic processes, which is rightly considered a weakness of digital assets, can also become a catalyst for the growth of crypto-flagships, but for this the global economic environment must change markedly. On the other hand, huge amounts of venture capital continue to flow directly or indirectly into the crypto industry. And this is not only about crypto enthusiasts like Michael Saylor, but also about much more conservative players like Citadel, JPMorgan, Bank of New York and BlackRock. In the second and third quarters of 2022, traditionalist investments in digital projects amounted to about $14 billion. But do not forget that in parallel, the market capitalization is sinking: only in the last 24 hours it has decreased by 0.22%. The main reason for the withdrawal of capital is market panic and massive asset sales. So which direction is the crypto market heading in? Let's try to figure it out based on fresh data on key assets.

U.S. holding giant Fidelity Investments has published a research paper, The Rising Dollar and Bitcoin, in which market experts have described the upward trend in the dollar as one of the main drivers of Bitcoin growth in the medium term. But for now, the flagship is giving disappointing signals as the BTC trading week that started at $19,300 ends below $19,000 with a daily loss of 0.9% and a weekly drawdown of 3.2%. At the same time, the capitalization of bitcoin fell by $11 billion over the week and now stands at $364 billion, but this did not affect the dominance of the coin, which now stands at 40.1%. 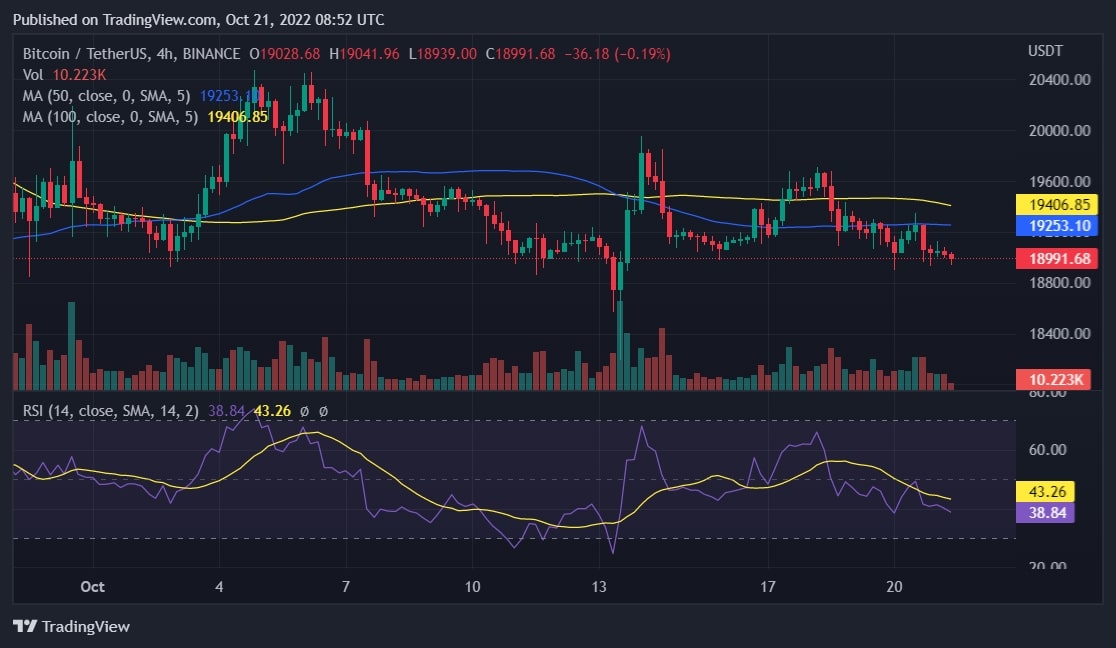 On the 4-hour chart, the 100-day moving average is pointing towards the intersection with the 50-day, which may mean that bearish sentiment is getting worse. But 50 MA will indicate growth, then the intersection of the lines will become an indicator of the growth of the asset in the short term. However, the selling pressure increased significantly over the week, so the market noticeably loses investments. In addition to fundamental reasons, this situation is due to the massive closing of short positions, so the bullish potential will not open until next week.

Crypto-silver during the week repeatedly tried to gain a foothold above $1,300, and the bulls even tested the levels above $1,330. But on Wednesday, the price began to decline and by the end of the week it did not overcome the $1,300 mark, around which local support had already formed. The coin has retested the support zone at the $1,265 position, and at the moment, the low is forming around $1,270, which is accompanied by a consolidation of losses. But experts specify that this bullish “breather” can help accumulate efforts for a break above $1,300 and further attempts to consolidate. 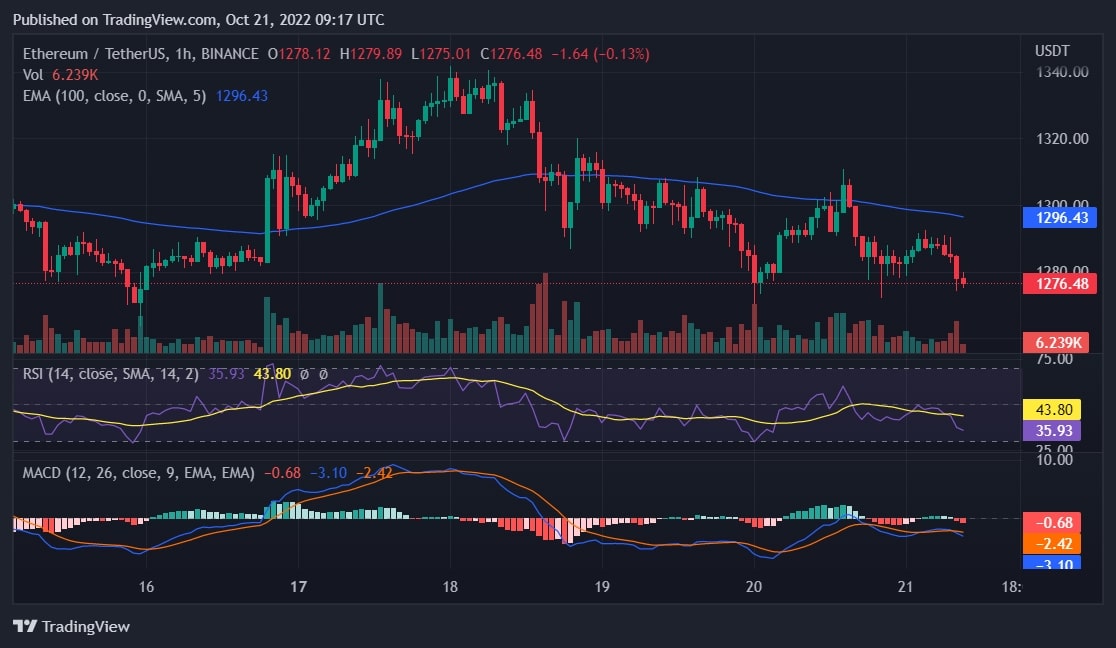 The first major resistance is now around $1,295 and the 100 hourly simple moving average. On the hourly ETH/USD chart, a new bearish conjunct line is forming with resistance near $1,295. A clear break above the resistance at $1,300 would open an upside channel to $1,320. But if ETH does not break above $1,300, a further decline will send the price to support at $1,270. The next major support is around $1,265. A break below this zone would see a crash to $1,220, but this will require the concomitant influence of macro factors.

BCH in Anticipation of Losses

BCH struggled to gain momentum to overcome the resistances at $112 and $115, making a high near $112, but almost immediately began another decline. Since Wednesday, the coin has consistently fallen below support at $108 and the 50% Fibonacci retracement level of the upside move from a swing low of $102 to a high of $112. BCH is currently trading at $104. 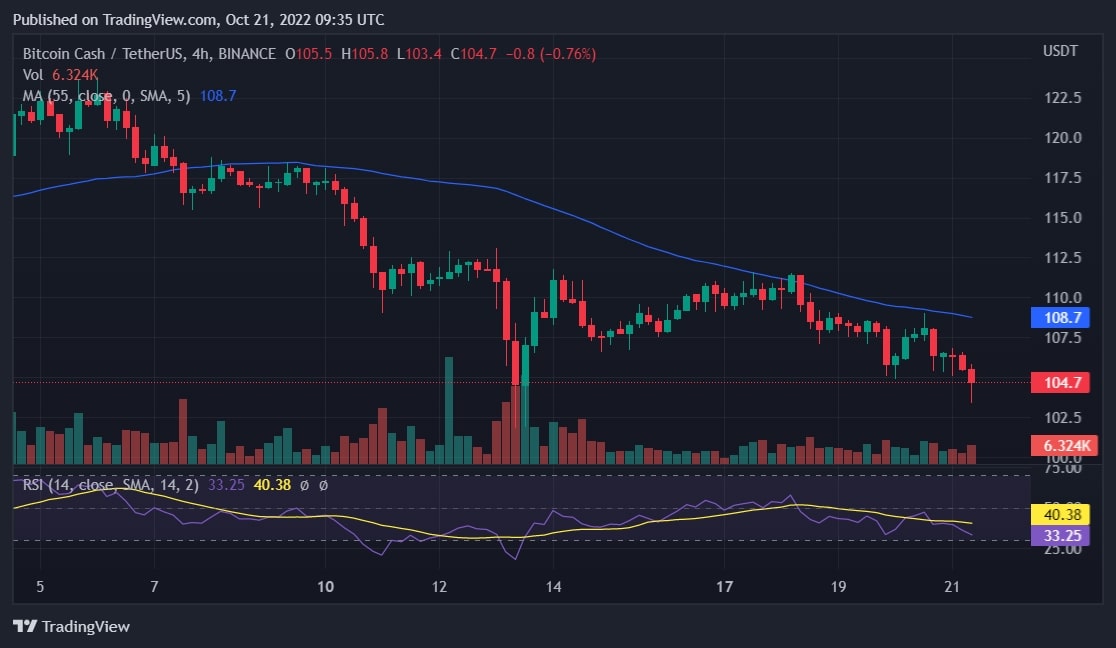 The next major support is near the $102 level, below which the bears could target the $100 mark, but below they will have to face support at the $95 position. On the other hand, the immediate resistance lies near the $108 level, where the main bearish trend line is now forming. The first serious resistance is located near $112, and the main one is near the $115 position. Any further gains could set the pace for a move to the $125 level.