ETH and BCH Are Losing Bullish Power, and ADA Is Preparing for a Breakout: Results of the Trading Week and Expert Forecasts

Rates on key crypto-assets for this week were very cautious and some fears of cryptanalysts, nevertheless, were partially justified. It’s worth noting that the crypto market, in fact, is still in a state of decline, despite the fact that many currencies managed to consolidate profits and form quite powerful support levels. For example, the scenario with BTC rallying to $25,000 in a few days was initially rather poorly substantiated. On Monday, the flagship broke above this level, set a new top at the $25,135 position and immediately rebounded, unable to cope with strong resistance at a strategically important level. However, BTC bulls have been able to form strong support around $22,500 and several other current “power spots” in the range between $23,000 and $24,000. At the time of writing, the current supports have already been broken as Bitcoin pulled back to $22,800. But further bulls it will be much more difficult not to reduce the selling pressure, since investors have accumulated a lot of coins in this particular place. But now the attention of analysts is focused not on the flagship, but on altcoins, since the events taking place there will potentially have a greater impact on the market as a whole. And here's what we're talking about:

Crypto silver returned to the bear market barely touching the $1,900 level. The weekly high was $2,006 on Monday when ETH tried to repeat its Sunday success. By the middle of the week, the asset was trading in the range of $1,850 – $1,900 and the pressure on the bulls gradually increased. On Thursday, the bears pushed the price below the $1,820 level to a local low at $1,806, and today the fall continued, Ethereum fell below the 100-hour simple moving average on the four-hour chart and trading continued already in the $1,750-$1,800 range. writing, ETH is trading at $1,449 and the dynamics of selling pressure continues to be high. 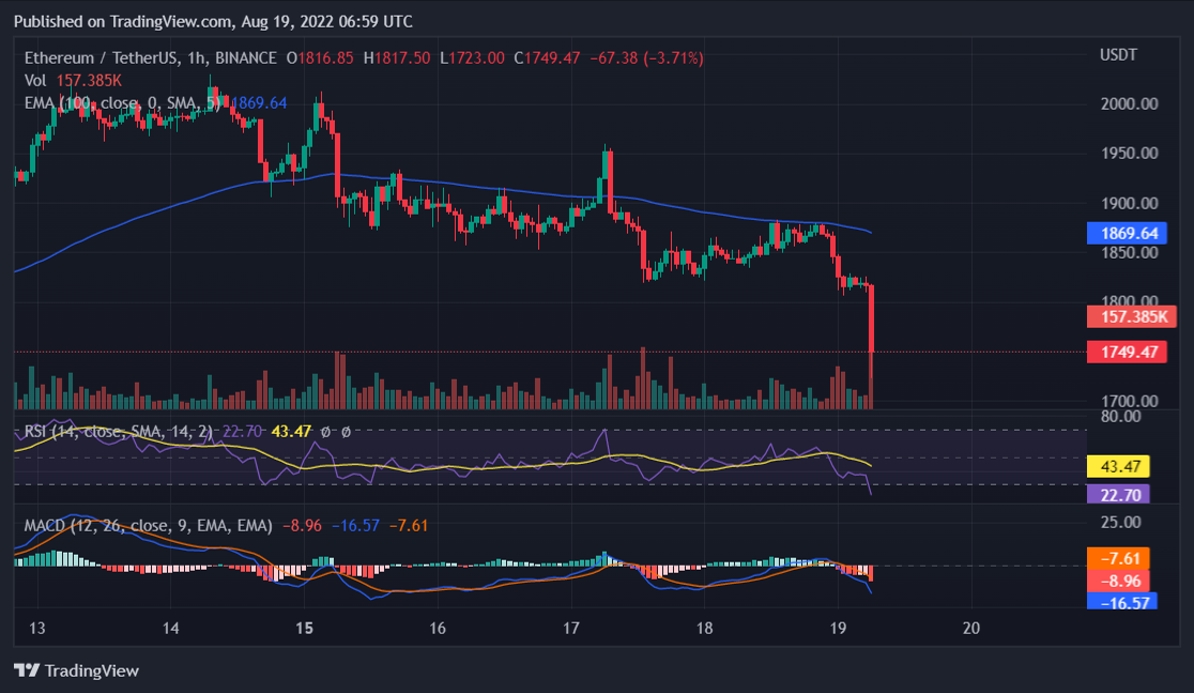 The $1,880 level continues to be key for the bulls, and if Ethereum fails to rise above this resistance in the coming days, which is highly unlikely even given the sluggish bear trading over the weekend, the fall will become uncontrollable. Unfortunately, crypto silver's main support at $1,800 was breached in just one hour. It looks like the selling pressure is bringing ETH to a strong support at $1,650, where the “grand fight” will take place. At the very least, the RSI indicates that the bears have taken their toll, jeopardizing all of the bulls' efforts over the past 9 days.

The price of the key BTC fork has struggled to gain momentum and the bulls have been accumulating efforts to rise above the key resistance levels at the $148 and $150 positions. As a result, a local high formed around $144 on Thursday, and the trend reversed under bearish pressure. At the end of the week, sellers managed to push BCH price below the Fibonacci 61.8% retracement level of the upside move from the $113 position swing low to the $165 high. It’s currently trading below the $140 zone and the 55 simple moving average on the 4-hour chart. 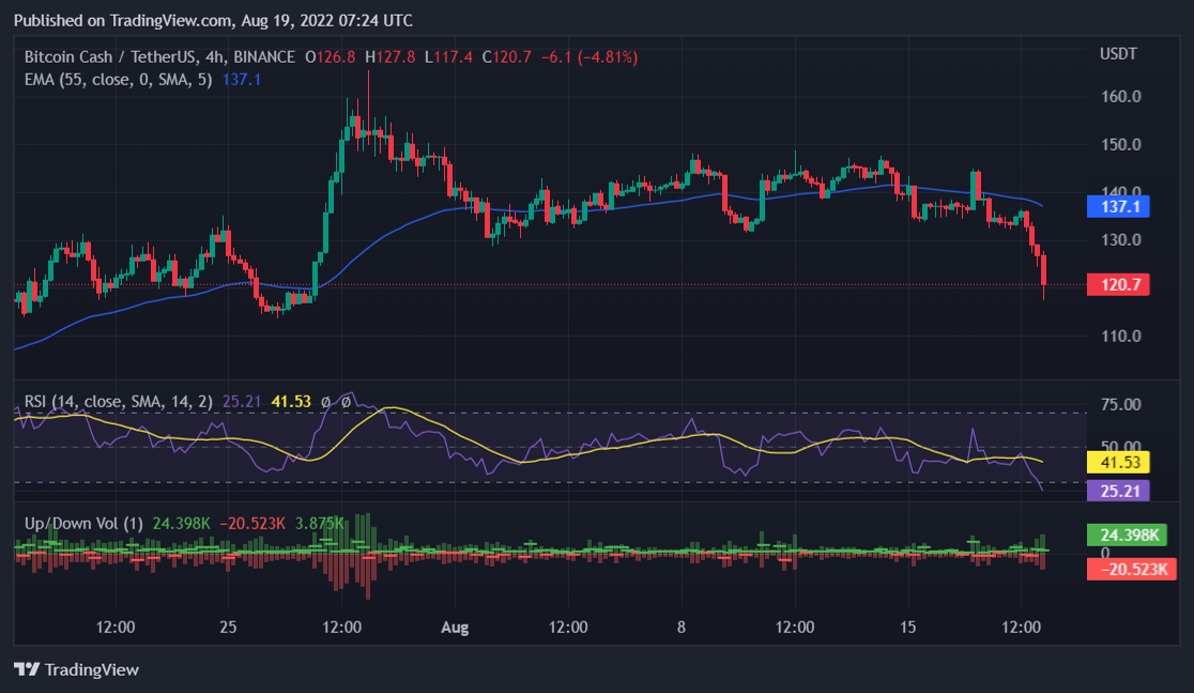 The next target for the bears could be the $114 level. current resistances remained at $132 and $138. A fall in the asset price below $114 is likely to become uncontrollable. The 4 hours chart of BCH/USD also forms a key bearish trend line with resistance around $139 and major resistance at $140. However, these positions are still very far away, given the real potential of the bulls.

Authoritative anonymous crypto analyst InvestAnswers has built an interesting scenario, as a result of which ADA, which is now going through hard times, can cost more than ETH. How? Over the past year, the ADA/ETH pair has fallen by 68%. It’s now forming a bottom at 0.00025 on its chart, which seems to be the main one for the pair's current major move. However, InvestAnswers recommends keeping an eye on the behavior of the pair after the launch of the long-awaited Cardano Vasil hard fork, which was supposed to be released back in June, but was postponed many times and is now announced for the end of August. 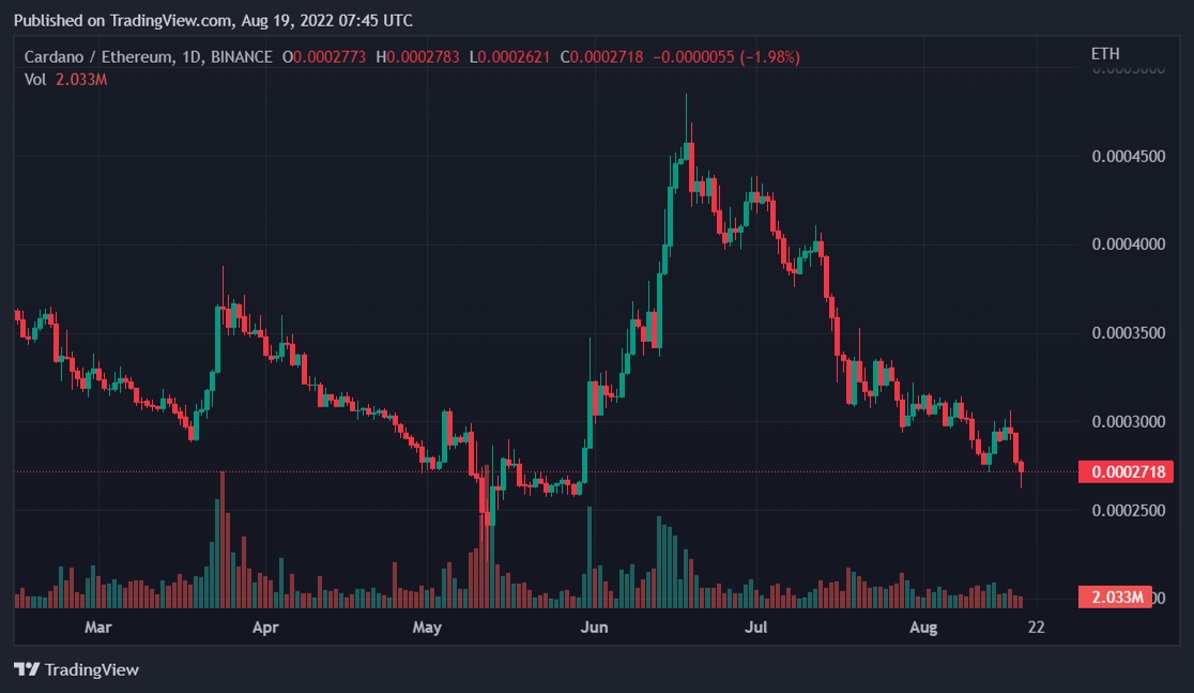 According to the crypto analyst, if the Cardano hard fork is successful and is sufficiently popularized by the crypto community, the price of ADA could overtake the price of ETH. This is indicated by several fundamental factors, as well as the potential of Cardano, as the developers announce a significant improvement in the scalability and performance of the coin’s blockchain. However, InvestAnswers did not indicate the timing of such an ADA price move or its likelihood, so we have to keep an eye on the coin and be on the lookout.