The bankruptcy of FTX and the controversial behavior of the former CEO of the crypto exchange, Sam Bankman-Fried, finally consolidated the market stagnation and “brought” many bitcoin maximalists, such as Michael Saylor and Mark Cuban, to the need to publicly defend bitcoin from panic sales. It seems that key crypto influencers have sensed the real fragility of the market and the direct relationship between the prices of key assets and fundamental events in the industry. Cathie Wood, Justin Sun and Changpeng Zhao (CZ) responded most quickly to the challenges related to the local crisis against the background of the crypto-winter. Moreover, the head of Binance this week created the Crypto Industry Recovery Fund, whose investors have already become some key representatives of the community. At the same time, Vitalik Buterin actively took up the expansion of the technological front of the industry. According to CZ’s announcement, the Ethereum co-founder has launched the development of a Proof-of-Reserves protocol that will be tested on Binance. Whether the measures taken by the main figures of the industry will be sufficient to restore the confidence of institutional investors in stagnant crypto-assets, time will tell. In the meantime, we will consider the market situation from a technical point of view.

Strongest Sell Signal Since 2021: BTC on the Verge of Collapse?

Watching the price movement of BTC on a 3-day time frame, experts from TradingShot have identified a MACD convergence-divergence pattern that has been forming a bearish crossover since last week. According to analysts' observations, since March 2021, the identical pattern has formed at least four times, each time leading to new lows. On September 16, 2021, after the formation of the intersection, the fall was limited by the loss of "only" 18% of the asset's value, but three other cases led to collapses of 50%, 52% and even 57%.

A standard 50% drop from today's Bearish Cross candlestick will push the price slightly below the all-important psychological $10,000 mark. Also note that BTC was rejected at the 3D MA50 border (blue trendline). The same thing happened in late March/early April 2022 before the last bearish MACD crossover and the 57% drop. However, analysts from TradingShot noticed that unlike previous similar crosses, the current one occurred against the backdrop of a declining price channel, while other similar events occurred when the price increased. There is no certainty that this will have a positive effect on the price movement of the flagship, but experts do not exclude that the current cross may lead to the completion of the bearish pattern.

ETH Is Firmly Entrenched Above $1,200: Is It Worth Waiting for the Bulls?

At the time of writing, ETH is trading at $1,218, with a daily trading volume of approximately $6.8 billion, and price gains hovering between 1% and 1.1% over the same period. Crypto-silver has firmly established itself above the $1,200 mark and does not give up this position, except for periods of short-term market fluctuations. However, over the past two weeks, ETH has lost about 20% of its value, and so far there is no talk of excessive optimism. At the same time, the main market indicators do not provide clear grounds for tracking further price movements. 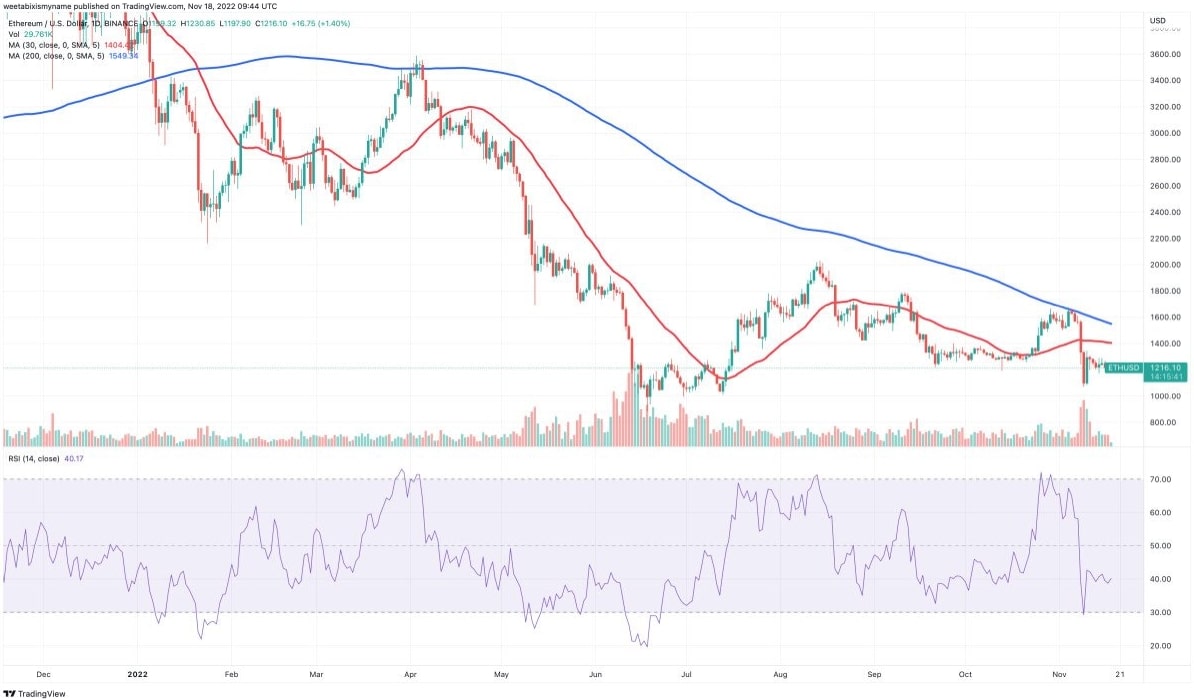 The RSI has risen to 40 over the past few days, breaking through about 10 positions in a week. The 30-day MA (red) also remains below the 200-day MA (blue), indicating that the coin continues to fall. However, the fact that both indicators are low indicates the possibility of a breakout of the ETH price, but the timing of it is not yet realistic. The current price movements of ETH so far are almost entirely related to general market movements. This means that until the crisis around the collapse of liquidity on FTX is resolved, one should not expect powerful independent achievements from crypto-silver.

AVAX Hints at a Bull Run

At the end of the week, the bulls saved AVAX from falling below $12.78 again. The price of the asset rose as a result of the persistent efforts of buyers and now the coin is trading at $13.17, which, together with the indications of market indicators, indicates bullish dominance. On the daily chart, AVAX found support and entered a bullish phase, although the bears have ruled the market in the past few days, causing the asset to suffer serious damage as a loss of 12.27% in value. However, the MA is now above $13.46, and this can rightly be considered a bullish sign. 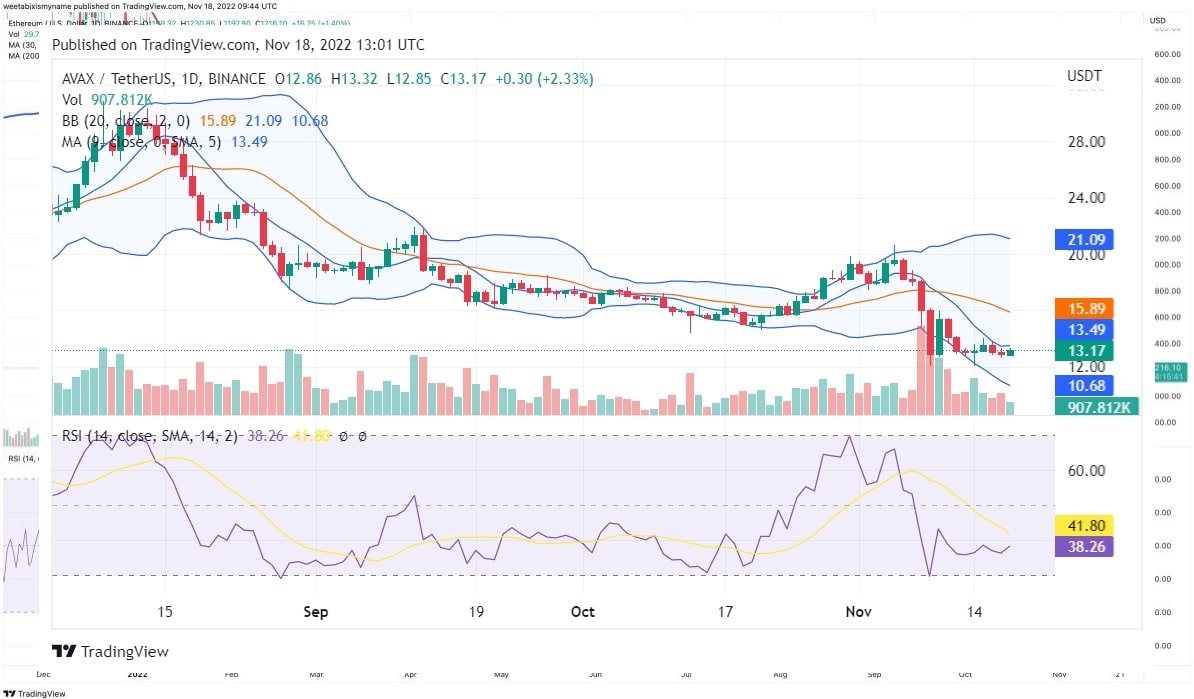 However, the volatility of the coin has increased, so we can expect that after the current consolidation, there is a possibility of further price breakout. The upper Bollinger band shows is at the level of $21.10, where the main resistance has formed, and the lower one is at the position of $10.64, where the key support of the coin is still concentrated. However, the RSI rose to 38, reflecting the dynamics of the growing trend and the gradual awakening of buyers.