Losses of BTC, Recessive ETH and Growing DOT: Results of the Trading Week and Expert Forecasts

The cryptocurrency market this week was characterized by unstable growth of key assets. Since last week, Bitcoin received a powerful price boost, which helped the flagship to gain a foothold above $17,000 and consistently strengthen its positions until the end of the week, when fundamental factors took over and the pre-New Year market panic activated sales. On the other hand, major miner Core Scientific received additional investment, causing its shares to rise by 200%, and the market felt a short-term strengthening. However, now the influence of this fundamental factor is offset by a number of other circumstances that play into the hands of the bears. The scandal surrounding the bankrupt FTX and its founder, Sam Bankman-Fried (SBF), is only gaining momentum. The SBF was arrested this week and sent to a prison in the Bahamas, where he is likely to await extradition to the US. This event received a negative response in the crypto community, so some experts predict a drop in the authority of the industry as a whole. However, during the week, many assets went out of stable price ranges, so for the first time since the beginning of November, we can talk about a chaotic, but market movement.

At the moment, Bitcoin is trading at $17,020 and the bulls are clearly losing their grip, as during the week it was not possible to form a strong support above this level. The daily loss of BTC is 3.45%, and the weekly loss is 0.8%, which means that the flagship is returning to November levels and is losing capitalization intensively. The growth of the asset during the week was an attempt by the yks to strengthen around the level of $17,500, which is strategically important for a further breakthrough to $18,000. of course it didn't. 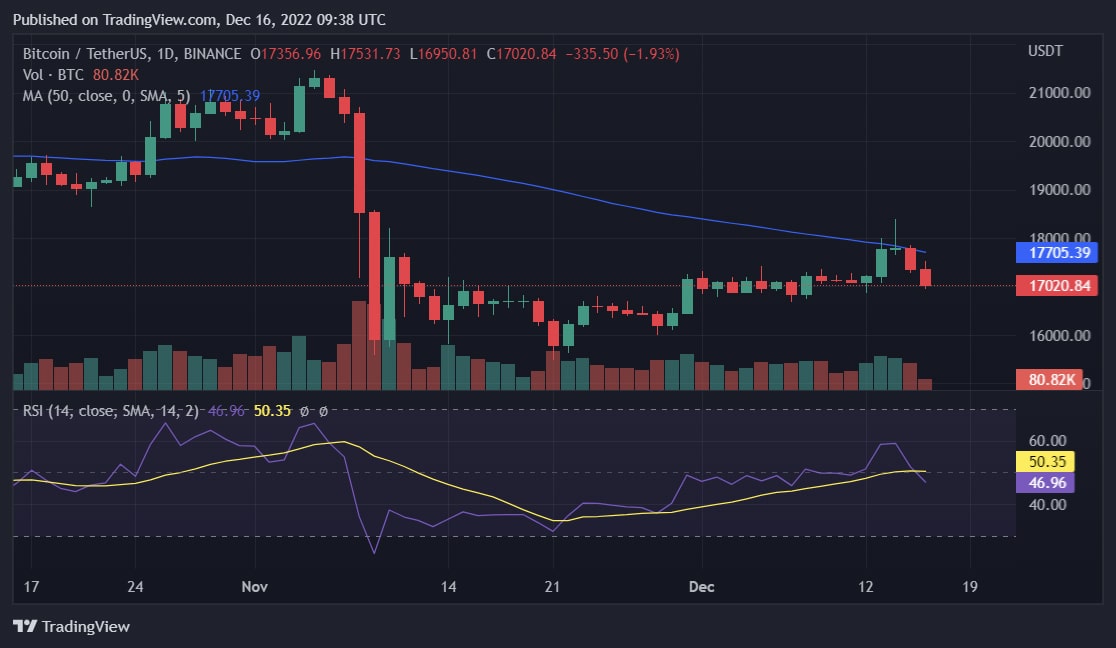 However, it is important to note that BTC’s rise above the 50-day MA was an important sign that buying forces are accumulating, which allows for similar moves in the future, as the flagship clearly has the potential to break out of the November range. Although it is obvious that conditions have not yet been created for a serious consolidation even above $17,000. During the weekend, the intensity and volume of trading will decrease, so we should expect further price correction of the flagship and the possible loss of several important positions below $17,000. natural sales.

ETH Returns to the "Origins"

During the week, the price of Ethereum could not overcome the $1,350 resistance zone, so a local peak was formed next to it, after which the coin began to fall in price. At the same time, the ETH recession was almost symmetrical to the BTC price movement, as a result of which the price of crypto-silver fell below $1,250 and continued to move down. During the decline, there was a break below the main bullish trendline with support near $1,290 on the hourly ETH/USDT chart. The price settled below the Fibonacci 61.8% retracement level of the upwave from the swing low at $1,240 to the high at $1,349. 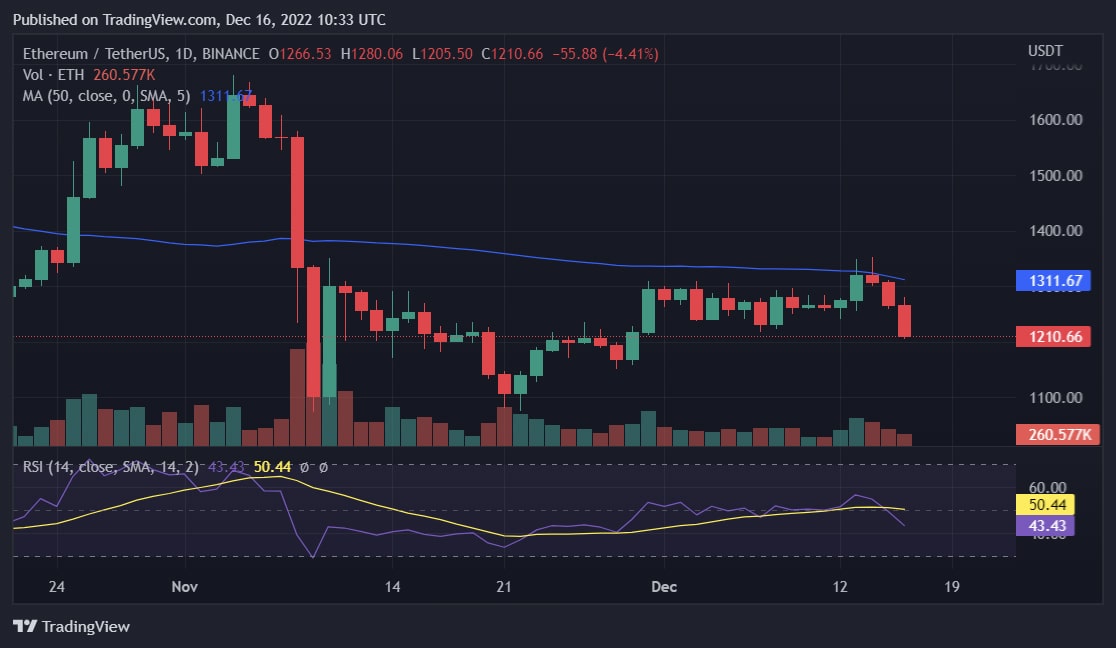 If Ethereum fails to rise above the $1,300 resistance, it may continue to move lower. Initial support on the downside is near the $1,260 level. The next major support is near the $1,240 level, below which the price could get a bearish momentum towards the $1,200 support. Any new losses could take the price to the $1,100 support. In case of growth, the next major resistance could again be the $1,350 level, above which ETH could rise to $1,400. Further growth could send the price to the $1,480 resistance zone.

During the last 24 hours, the price of DOT has been moving up. Similar patterns have been observed when bullish momentum intensifies to regain market control. Thus, at the weekly peak, the coin reached the level of $5.23, while reliable support remains around $5. However, if the price fails to overcome the resistance at $5.24, the bears may return. The 24-hour trading volume for the DOT/USD pair is currently $187 million and the market capitalization is $5.89 billion. 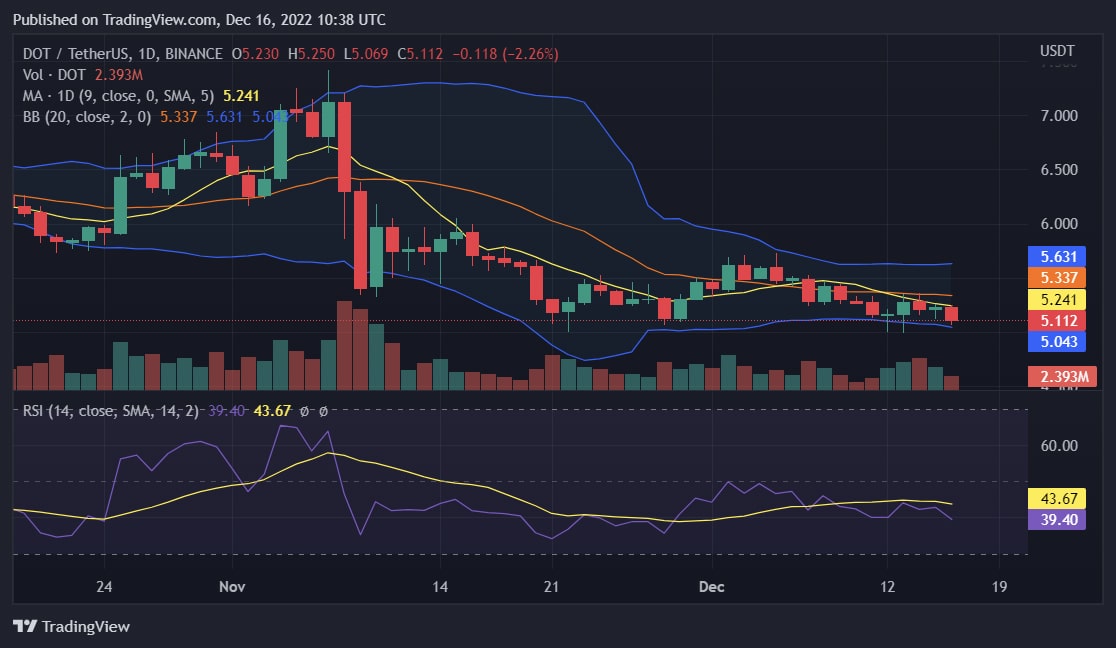 At the time of writing, the RSI has fallen below 40. The asset is overbought, which could mean the bulls are weakening. The 50 MA is above the 100 MA, indicating that the bulls are in control of the market. This suggests that the bulls are getting stronger and are likely to raise prices soon. The upper limit of the Bollinger Bands is at $5.63, which is the strongest resistance for the DOT. And vice versa, the lower border of the Bollinger Bands is located near the $5.04 mark, where the strongest support for the coin is now.