The Triumph of Ethereum 2.0 on the Verge of a New Market Collapse: the Results of the Trading Week and Expert Forecasts

Well, we waited for the transition of Ethereum to PoS and this event became truly historic. The merger dealt a significant blow to the Bitcoin community and set new, universal standards for modern digital money: they must be fast, scalable and environmentally friendly. Many market analysts directly said that the transition to Ethereum 2.0 would be a powerful impetus for, if not for the entire market, then at least for ETH itself. During Thursday, the trading dynamics were really optimistic and many assets crept up for crypto-silver, including BTC, which the day before lost several levels of support that it had been accumulating since September 9th. But the happiness turned out to be too short-lived even for ETH itself, as a couple of hours after the successful blockchain update, the asset fell below the key support levels at the $1,600 and $1,500 positions and is clearly showing a downtrend at the time of writing. On top of that, reputable market analyst Justin Bennett pointed out that judging by the dynamics of the decline in market capitalization, we are now on the verge of a big sell-off, as a result of which the prices of key assets will collapse by 40-50%. And this is the same fall that was discussed at the end of August. Now the market capitalization is again significantly below $1 trillion, and its fall is associated with a large-scale sale that took almost $300 billion from the market per day. Which asset suffered the most?

ETH is the Main Victim of Mass Sales: What to Expect Next?

So, the capitalization of ETH dropped by almost $23 billion overnight: from $201 billion to $178 billion. As a result, the price of the coin broke through all the support levels accumulated since the beginning of September and returned to the price range of $1,430-$1,480 for the first time since August 29. By the way, the “Head and Shoulders” pattern is clearly visible on the monthly chart of the crypto, which indicates a bearish dominance in the market. But it's not just the graphics. In line with the expectations of many traders, Ethereum should have collapsed before the merger, and after it began to skyrocket. Therefore, the market was overflowing with short bets of players who want to make quick money on the wave of hype. And a few hours later, given the sluggish trade and shattered hopes, these positions had to be liquidated. 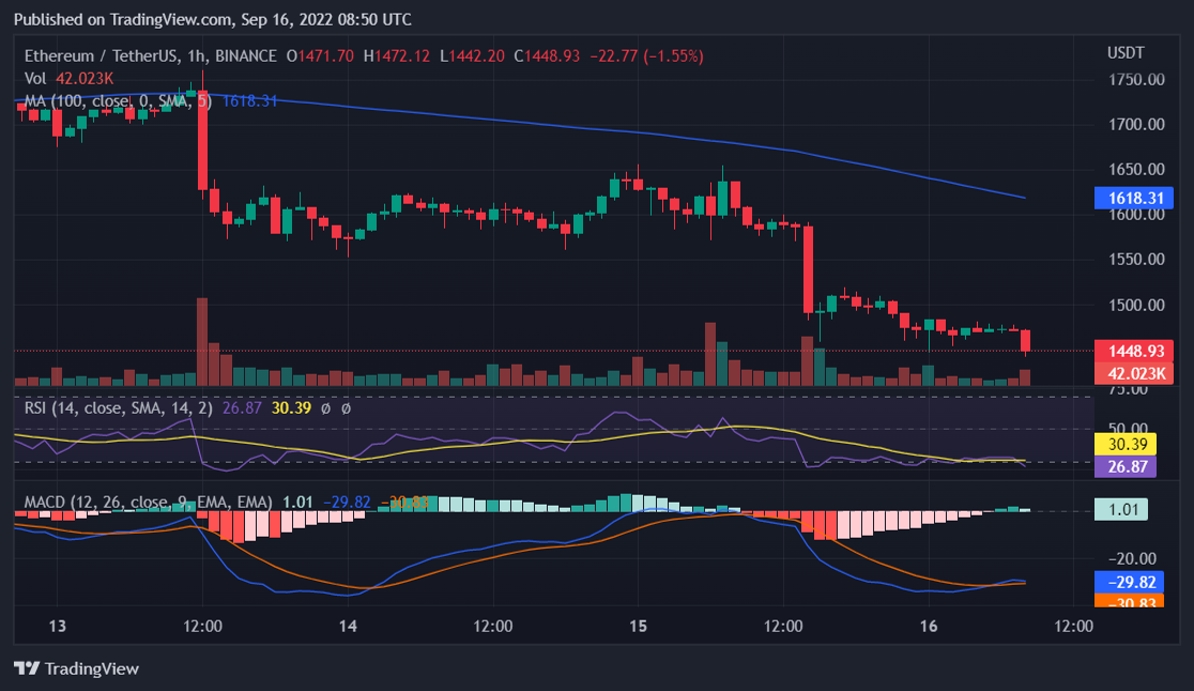 The coin has been trading below the 100-day moving average for three days now and closes the trading week with a new price pullback, so you should definitely not expect any positive changes during the weekend. The RSI indicates that ETH is clearly oversold and bearish pressure is deepening. And only the intersection of the MACD signal trend line gives a signal about a good place to buy. But, apparently, this indicator will soon change to the opposite.

Bears Return to the BTC Market

In the latest analysis of BTC by BaroVirtua on CryptoQuant, the expert predicts a quick and painful return of the bears to the market. The trick here is that the current cost of transferring miners to spot exchanges (hourly) was 10.4537 as of September 14th. This is an overestimated figure, and all past records have indicated that its increase was often accompanied by a fall in the price of BTC.What is the expected depth of fall? Calculating this is actually quite difficult. For example, the well-known crypto blogger Mac talks about the fall of Bitcoin to $17,000. At the same time, on-chain metrics look optimistic: the volume of the BTC outflow (7d MA) has just reached a monthly maximum, which can be considered as a sign of bulls, and the indicator aSOPR BTC turned green, indicating a possible market bottom.

Does this mean that "everything will be fine"? Unfortunately, this does not mean anything, since the current volatility makes it difficult to make any clear forecasts. Obviously, BTC will recover from the current fall much easier than the same. But for now, even if bitcoin “steps over” the $20,000 mark, this will rather not mean the return of the bulls, but a respite for the bears.

DOT Rushes to Return $7, But Returns Only to Worst Monthly Performance

In the middle of the week, symmetrically to ETH, DOT collapsed to the worst monthly price indicator and lost an important price level - $7. Now the coin is trading at $6.88, having lost 3.2% of its value over the past day. The bulls were unable to lift the price to $7.75, where it could potentially hold, so the current fall is happening quite rapidly. 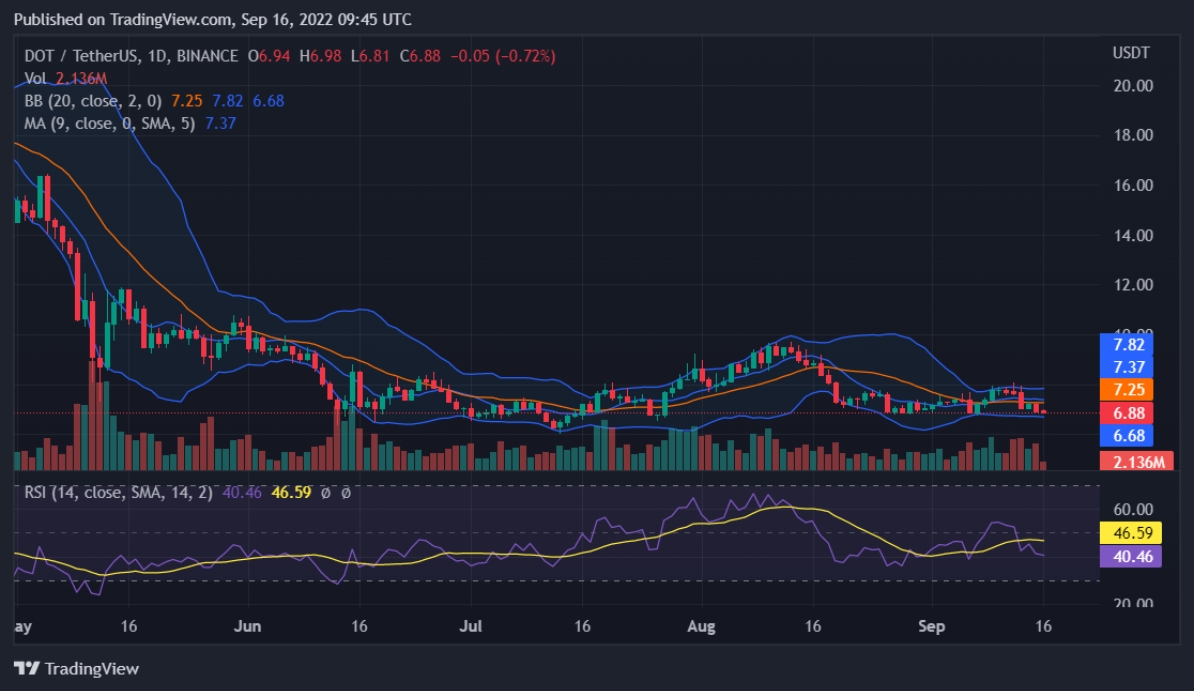 DOT shows a relatively moderate range of volatility, as evidenced by the Bollinger Bands, with the upper one at $7.82 representing key resistance and the lower one at $6.68 where support for the DOT/USD pair is formed. The middle line of the volatility indicator is formed at $7.25, which is above the price level of the coin. The RSI is slowly declining, in parallel with the downtrend of the coin. Now the indicator is in the lower half of the neutral area at around 40, which indicates the activity of sellers.