BTC on the Way to $10,000, ETH Is the Leader in Growth Among Altcoins and the AAVE Bullish Trend: Results of the Trading Week and Expert Forecasts

In the midst of a dramatic recession in the crypto market and news of a record interest rate hike from the US Federal Reserve, investor sentiment remains quite upbeat. Some headlines of analytical publications are still full of news about the imminent rally of BTC to $25,000, but it seems that many market players have simply resigned themselves to the high probability of further market decline and are accumulating forces for profit in the long term. First of all, it concerns Bitcoin. For the second half of the year, the second survey, this time conducted by the Chinese platform Weibo, showed that Chinese investors would willingly buy crypto-gold when its price drops to $10,000. 40% of 2,200 respondents said so. As a reminder, according to the MLIV Pulse survey published on Monday, 60% of BTC investors are confident that the flagship would rather fall to $10,000 than rise to $30,000. But market analysts do without sentimentality, so they openly talk about a change in priorities in the crypto industry. In particular, this concerns the relegation to the background of assets operating on the resource-intensive Proof-of-Work protocol, the main representative of which is Bitcoin. In particular, this is why the altcoin market is now gradually going into free swimming. But first things first.

12% Daily Growth: What Does the Uptrend of ETH Mean?

As we mentioned, polls on Weibo and the Bloomberg MLIV Pulse conducted in July indicate that investors expect the flagship crypto to fall to $10,000 — $13,000. But even if this data did not represent real statistical value, it would still reflect bearish sentiment in the market, and this indicates the consolidation of user opinions. Basically, this suggests that investors in both China and the US understand the consequences of macroeconomic pressure on the crypto market, so there is no need to count on a miracle. Even with today's bull run to $20,900, BTC is bouncing down from $21,000, which means that a bull run to $25,000 is highly unlikely. 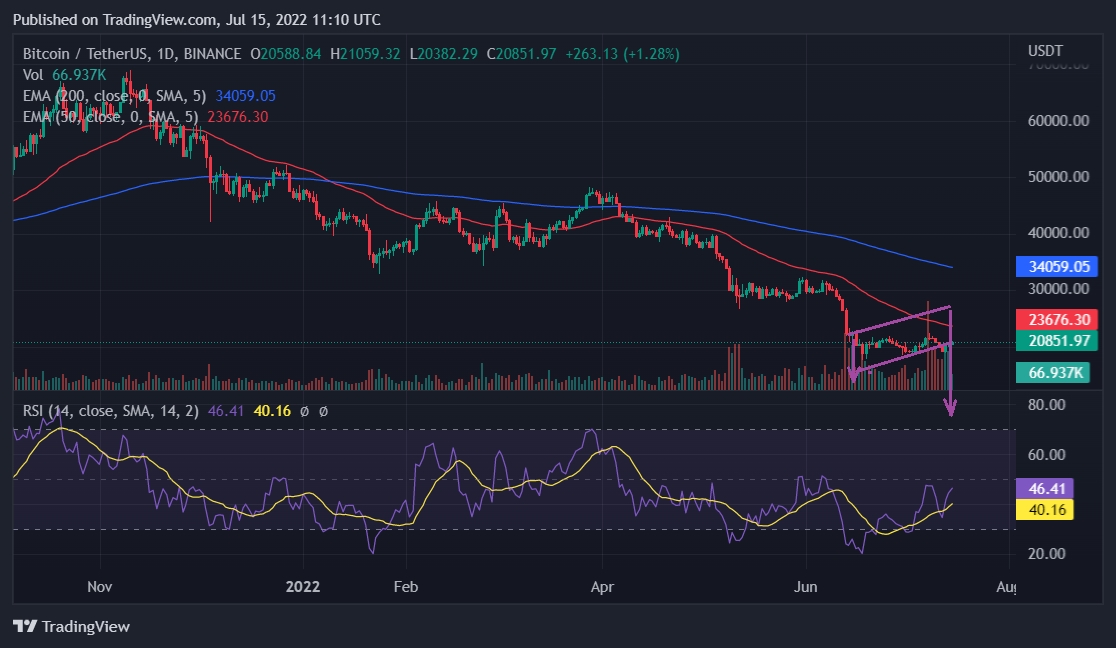 At the same time, the weakening of technical indicators also clearly reflects a further decline in the price of Bitcoin, which is also noticeable on the medium-term timeframes. The coin is forming a potential bear flag pattern that could see it fall below 13,000 as early as September. Although the volume of trading is now growing.At the same time, the RSI is approaching the balance between buying and selling. However, in conditions of high volatility, this can only speak of situational changes in the indicator. Therefore, direct signals for the growth of the asset are not expected in the near future.

12% Daily Growth: What Does the Uptrend of ETH Mean?

At the end of the trading week, the altcoin market noticeably turned green, and the growth leader was the crypto-silver with its 12% growth per day, which is associated with the launch of the 9th shadow fork Merge. Now the coin is trading at $1,221, being almost at the top of the local range from $1,077 to $1,225. The bullish move in the ETH price is also due to the successful testing of one of the last tests before the merger, which was carried out yesterday by the developers of the Ethereum core. Recall that the transition of the crypto-silver blockchain to the Proof-of-Stake protocol was announced as early as September of this year, so its capitalization is consistently growing. 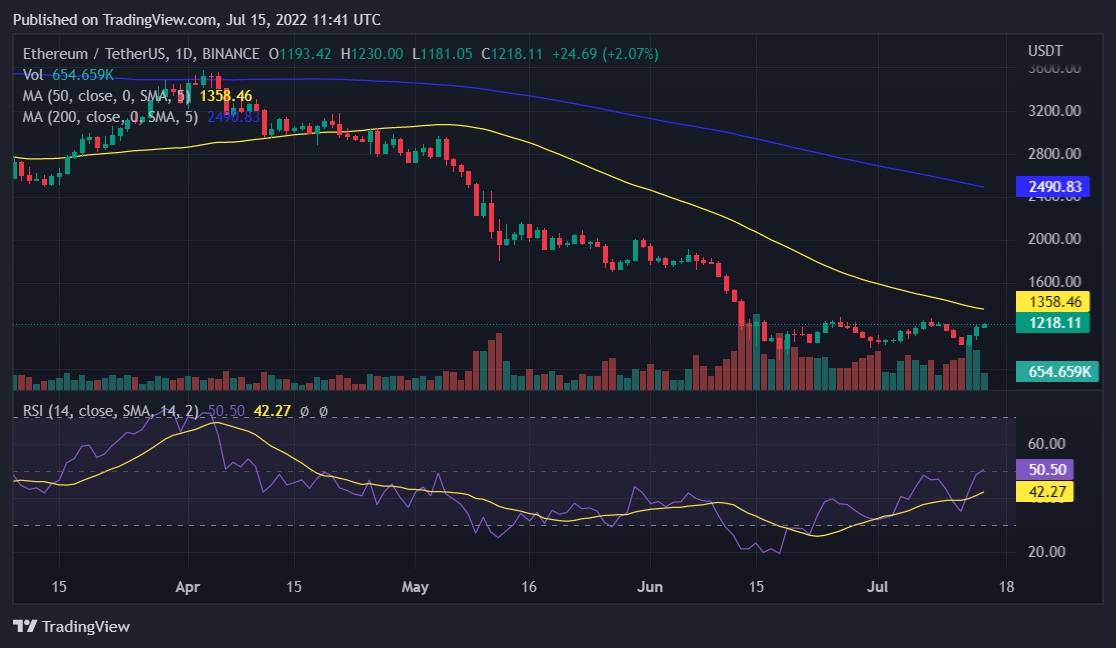 ETH has been trading in its current range since mid-June and is almost unchanged. That is, support at the level of $1,000 has been tested many times. This means that there is a healthy demand for this position, enough to overcome further sell-offs. But so far this is not enough for the price to begin a significant increase. However, now the situation may change in favor of the bulls. 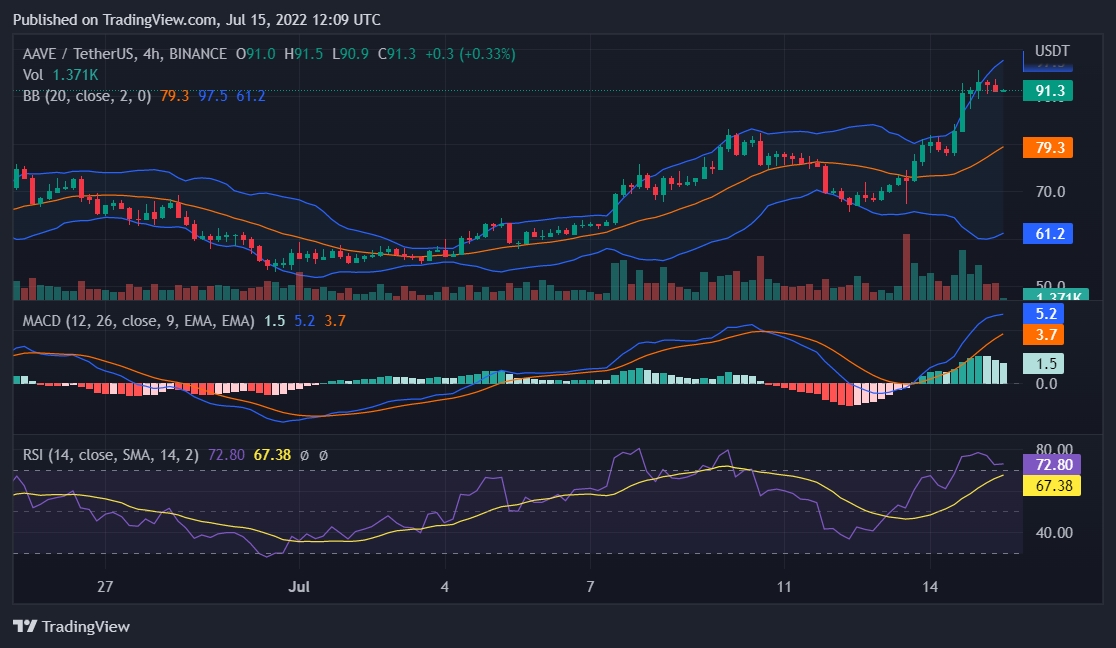 The RSI is currently below 63 and is signaling some bearish price momentum. MACD is in bullish territory, but a bearish crossover is likely in the near future, which could lead to a correction. The upper Bollinger band is now at $93.83 and the lower is at $77.66, which is clearly a bullish scenario.