BTC Bulls are Fighting for $30,000, ETH Hopes for a Strong $2,000 and Collapse of LUNA: Results of the Trading Week and Expert Forecasts

At the end of perhaps the most difficult week since July 2021 on the crypto market, the main cryptocurrencies began to give recovery signals, which seemed quite unexpected, given the events of two days ago. Among the market leaders there is no longer a promising LUNA crypto and UST stablecoin, the collapse of which led to a complete stop of their blockchains. Just yesterday, the fall of Bitcoin and Ethereum still seemed uncontrollable, which significantly affected the capitalization of the entire crypto market: from $1.6 trillion on Monday, it fell to $1.11 trillion by mid-Thursday. Recovery followed only a day later, and at the time of writing, the capitalization is $1,296, that is, it fluctuates at the level of May 11. Bitcoin and Ethereum recovered approximately 8% during the day to $30,300 and $2,070, respectively. But given the general market situation, this is more puzzling than reassuring. In both cases, asset prices appear to have been held back by consumer demand. In the case of Bitcoin, it’s generally difficult to calculate the price at which mass selling will completely discourage new traders from entering a position, so the position of crypto-gold does not cause much anxiety so far. As for the altcoin market, not everything is so simple. However, let's go in order.

After almost a 40% drop, Bitcoin lost several of its most important support levels by Thursday. But today’s uptrend has already “made a splash” as the crypto has recovered above $30,000 and is actively trying to gain a foothold. According to some reports, BTC is already forming potential support near the positions that it managed to return, and the bulls are building up strength for further recovery. It’s worth remembering that Bitcoin actively tested the current level a little less than a year ago — from June to July 2021. Then the coin made four major rebounds from positions around $30,000, after which a confident uptrend was outlined. However, there are no guarantees that this scenario will repeat itself.

Yesterday's rebound on the BTC chart is associated with a sharp boost in purchases, which formed a clearly distinguishable “knife” on the trading volume chart. In fact, this place will now become the main support for Bitcoin at this stage. As for the technical part, here the focus is on the RSI, which for the first time since the beginning of the month began to grow. It indicates the possibility of a short-term reversal after falling to yesterday's bottom. If the indicator readings rise above 30, we can safely talk about the beginning of a new uptrend.

Where are ETH whales sailing?

Crypto-silver has been very unwell in recent weeks: in the last 7 days alone, its price has fallen by 32%. But over the past 24 hours, ETH has risen symmetrically to BTC and regained its pivot position above $2,000 at $2,090. Of course, we don’t talk about a confident fixing of the coin yet, since the weekend is ahead, that is, the asset will be traded rather “by inertia” in the next two days. But what is really interesting — the movement of ETH whales. Yesterday, their activity reached the maximum level since January, when the value of the asset also fell below $2,000. Last Thursday, 2596 transactions were registered with Ethereum in the amount of $1 million or more. 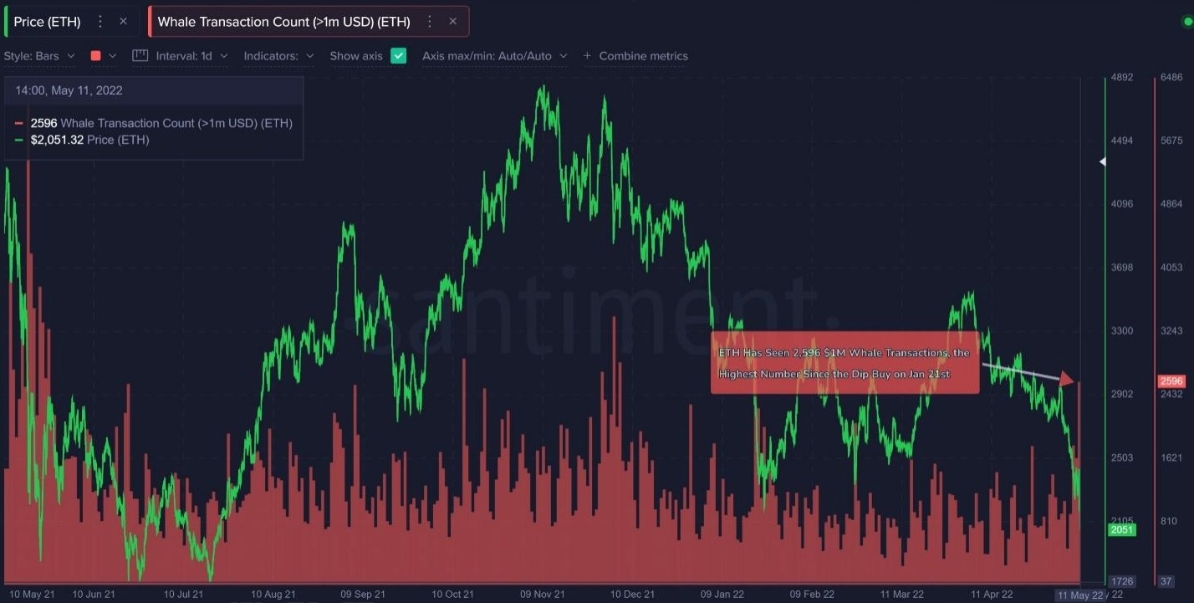 Transactions boost has also been registered on the Curve platform, a decentralized exchange powered by Ethereum. According to a series of tweets from Curve Finance, the volume of transactions on the Ethereum network exceeded $5.8 billion for the third day in a row, and so far this is a record value. In addition, the volume of Ethereum cross-chain transactions exceeded $6.8 billion. The reasons for this activity may be different, but its characteristics are quite unambiguous — it’s predominantly buying, which means that a confident uptrend may soon appear on the crypto-silver chart.

The collapse of Terra: What is Known at the Moment

After several attempts to restore the UST stablecoin and its algorithmically linked LUNA coin, Terra was forced to completely shut down their blockchain indefinitely. First of all, this was done in order to prevent control attacks, the likelihood of which increases dramatically due to the vulnerability of the network. As for LUNA, its cascading delisting on most major exchanges is now ongoing. It’s important to understand that delisting is equivalent to the death of a cryptocurrency, since nowhere, except on trading floors, its circulation is impossible. The culminating period of LUNA's existence was April of this year, when its value reached $116. The coin was issued in 2019 and since 2021 has established itself among the leaders in terms of growth dynamics. To date, LUNA's hyperinflation and its subsequent collapse has been the most dramatic and unexpected in the history of digital money.