Have we waited for the cryptothaw? Indeed, the outgoing week in the cryptocurrency market will be remembered, perhaps, as the first serious bull race of the year, which is still not over and has every chance to change the general market paradigm inherited from the difficult year 2022 in every sense. Nevertheless, it is too early to talk about long-term growth, since the current growth of quotations is accompanied by active sales. For example, during the first phase of the bull run on Thursday, the total number of liquidations in the market reached nearly $250 million. Market analysts attribute the "flourishing" of the crypto market to a decrease in the pressure of macroeconomic factors on the ecosystem of digital assets. Indeed, the active phase of the fight against inflation in the US was completed at the end of last year, and the cascading bankruptcies associated with the collapse of FTX acquired relatively clear outlines, which made it possible to at least approximately calculate the possible damage to the industry. At the same time, massive layoffs from giants such as Coinbase and Crypto.com are stabilizing the environment by lowering the costs and operating costs of trading platforms. Of course, in such a scenario, the issue of security of user assets becomes at the forefront, but this is a topic for a separate opus. Our main task for today is to catch the market dynamics based on a fresh analysis of the most interesting coins.

12% Increase in a Week: the Return of BTC Bulls

According to blockchain analytics company Glassnode, about 13% of the crypto flagship’s circulating supply became profitable again, as crypto gold passed the important $18,000 mark by the end of the week and continued to grow, while those same 13% of coins were bought in the range between $16,500 and $18,200. According to Checkmate, Lead Analyst at Glassnode, accumulation in this area could have a significant impact on BTC’s future price action, as several powerful support levels could be generated in this zone, where demand will significantly outstrip supply. 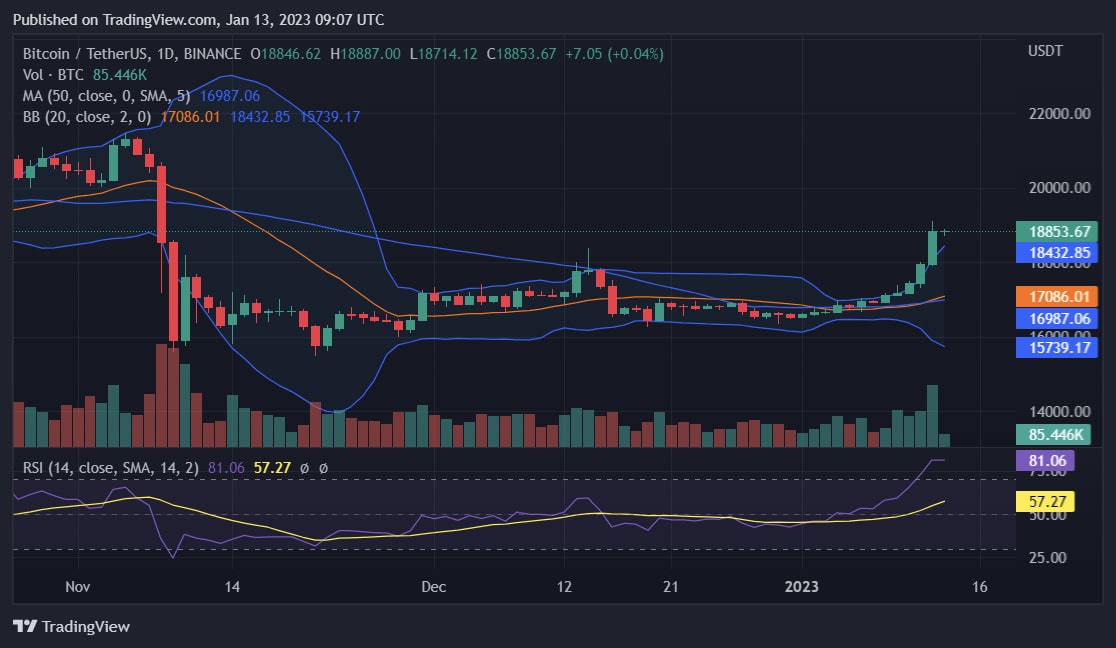 As for the technical aspects of the price dynamics of the flagship, here the experts also fix an obvious breakthrough. Already on Monday, the price of the asset broke through the 50-day moving average, and by the end of the week, the distance between the current price level and the MA has grown significantly. For the first time since early December 2022, the trading channel has apparently widened and BTC is now trading above the main resistance at $18,432 as the price of the asset is $18,853 at the time of writing. By the way, judging by the RSI, buyers have achieved decisive dominance in the market, as the indicator shows a fantastic index of 81.06. It is worth noting that such values do not stay for a long time, so we should expect BTC price correction in the near future.

By the end of the trading week, the price of crypto-silver rose above the $1,400 resistance zone and formed a high near $1,437. At the moment, there is active consolidation of profits, but the price has not yet fallen below $1,400 and the 100-hour simple moving average. On the hourly chart of ETH/USD, a major bull trend line is forming with support near $1,365 as a recent downside correction below $1,420 and the price of the coin fell below the Fibonacci 23.6% retracement level of the up move with a swing low at $1,351 and a high — for $1,437. 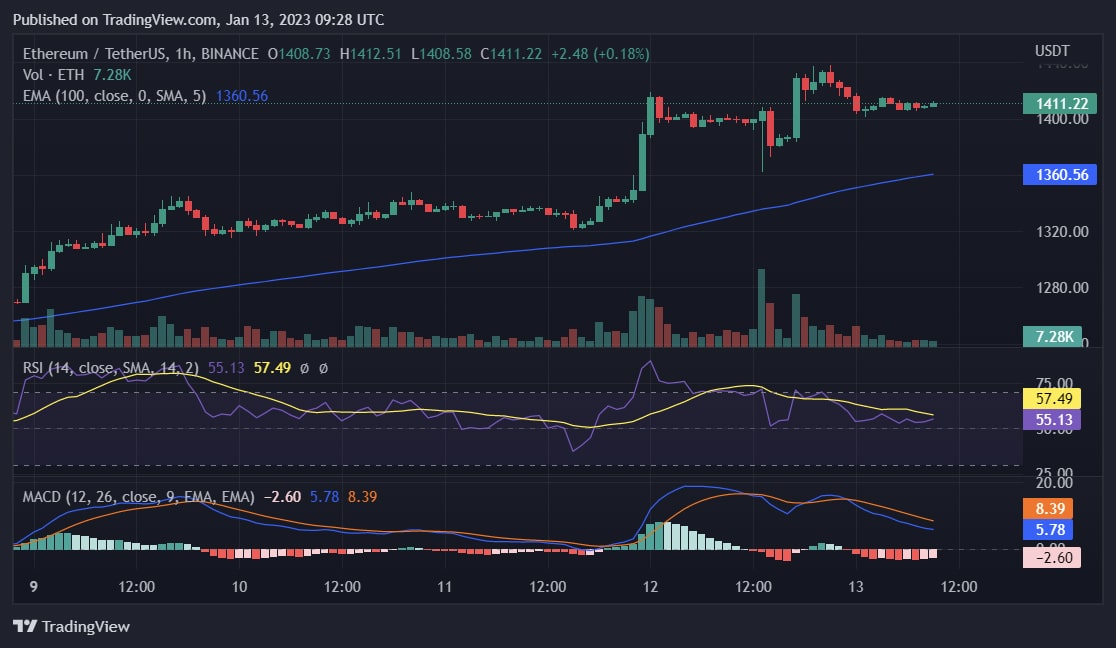 ETH price is stable around $1,400. Immediate resistance is near $1,435, and the main one is near $1,500. However, if Ethereum fails to overcome the resistance at $1,435, a downward correction may begin to the initial support at $1,394. But despite the tiredness of the bulls and the weakening of the bullish momentum, the asset seems to have simply consolidated above $1,400, and demand is currently outpacing supply and continues to grow.

Is SOL Rushed to the Moon?

After a long break, the promising altcoin SOL is back in trends and shows a fantastic 28% weekly growth, outperforming all cryptocoins from the TOP-10 list by capitalization with such dynamics. During the week, the bulls managed to push the price of the altcoin above the resistance level at $16.50, after which a new high was reached at the position of $17.47, after which profits began to consolidate and a slight correction below the 23.6% Fibonacci retracement level of the $12 swing low .70 to a high of $17.47. 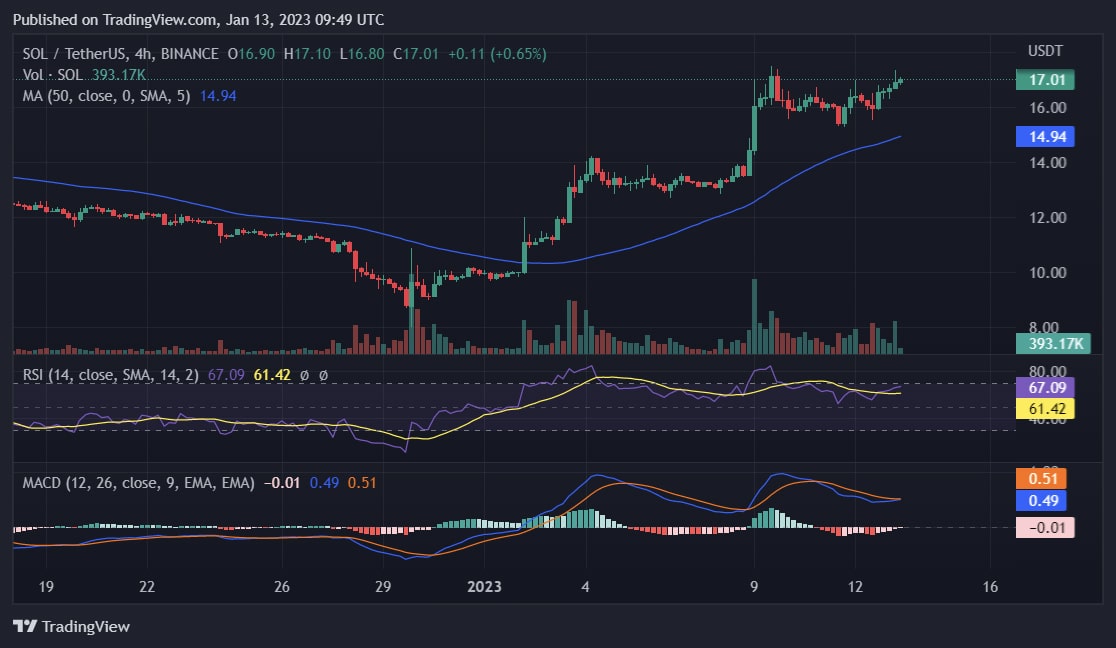 At the time of writing, SOL is trading above $16 and the 100-day SMA. On the 4-hour chart of the SOL/USDT pair, a key bullish trend line is forming with support near $15.90 and serious resistance at $17.50 and $18. According to the MACD, SOL bulls are gaining momentum, which means that the buying momentum has not weakened. The RSI is also actively rising, so by next week it is quite reasonable to expect a breakout of the $18 area. But we are not talking about fixing yet.