BTC on the Scales, ETH Froze Above $1,880, and SOL Is Trying to Catch on to the Trend: Trading Week Results and Expert Forecasts

The fourth week of the thaw in the cryptocurrency market continued the trend of separating altcoins from crypto-gold, despite the fact that the general state of the industry can hardly be called determined. However, the approach of the Ethereum 2.0 update continues to increase the hype among investors, which in parallel increases the general interest in the market. But with BTC, everything is not so clear. Market analysts are divided in their assessments, and while some believe that the flagship is aiming to break through the resistance at $25,000 and rush to the new ATH, others say that the dark streak for Bitcoin is far from over. In particular, "Gold Bug" Peter Schiff believes that the price of Bitcoin is still hinting at a fall below $10,000 due to forced sales, and last year's ATH may never be reached at all. By the way, according to CryptoQuant, crypto gold is still in a downward market trend, since most of the addresses registered on the network after the US Federal Reserve announced an 8.5% increase in interest rates belong to passive hodlers who are unable to influence market changes. But, as we know, the crypto market is multi-factorial, so today we will look at different scenarios for the behavior of key assets in order to prevent premature fuss.

The ambiguous price dynamics of Bitcoin at the end of last/beginning of this week was due to the fact that the market was looking forward to inflation data, which turned out to be softer than expected, and this clearly cheered up investors. Weekly growth of BTC was 3.5%, and now the asset is trading at $23,947. The upward channel of Bitcoin has so far capped the price within the current support and resistance zones. If this trend continues, it’s highly likely that the uptrend will continue and the potential reversal will occur only around the $25,000 — $25,500 price range. 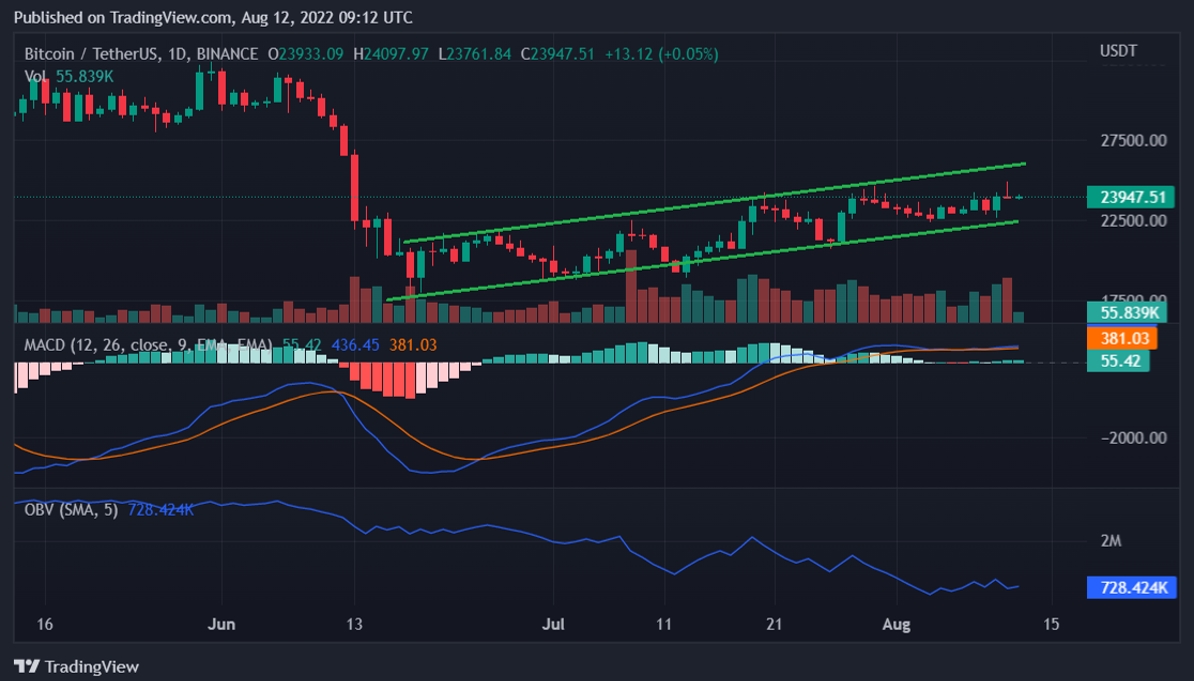 According to the MACD, the bullish momentum has noticeably decreased since the end of July. However, over the past two weeks, the number of addresses containing at least one BTC has been steadily increasing. And even if most of these addresses belong to hodlers, provided that the growth rate of their number is maintained, this momentum may be quite enough for Bitcoin to break through the $25,000 mark. On the other hand, the number of buyers may decrease as the price approaches the resistance line. Therefore, investors should consider the MACD readings indicating that the current trend cannot continue for long.

On Wednesday, Ethereum abruptly “saddled” the $1,800 level and continued to gain momentum until the end of Thursday. The price of the asset even rose to $1,920, but after that there was a downward correction below $1,900. ETH price tested the 23.6% Fibonacci retracement level from its recent rise from a low of $1,655 to a high of $1,943. We are now watching a key bullish trendline form with support around $1,880 on the hourly ETH/USDT chart. 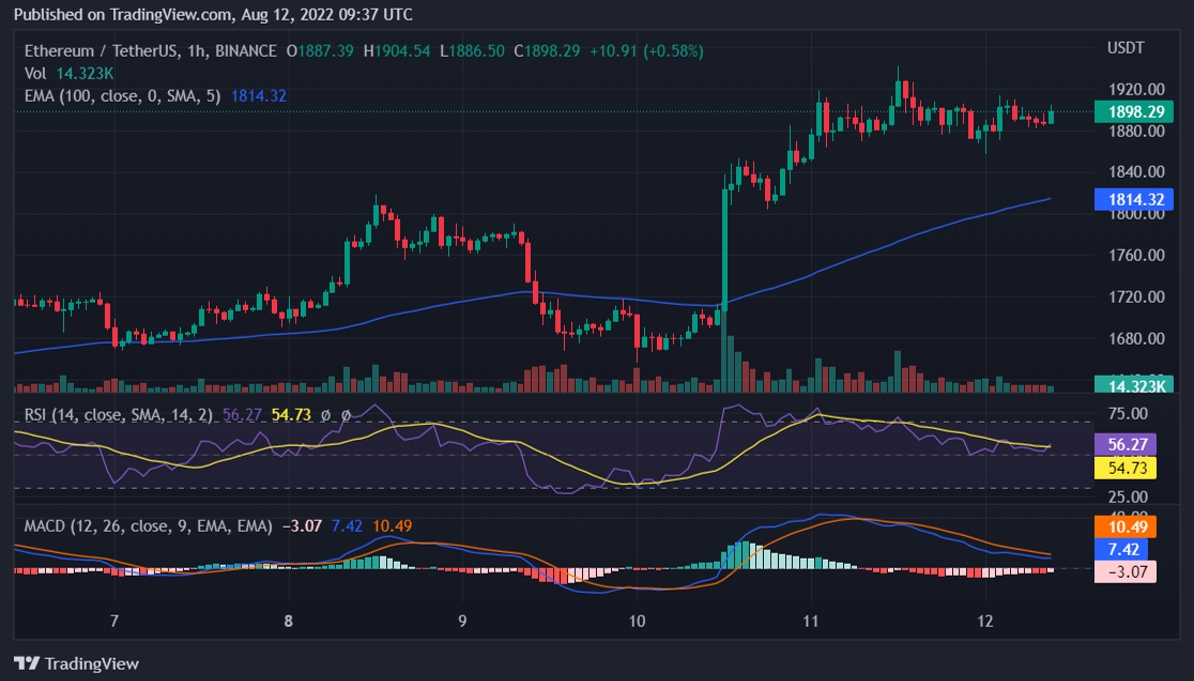 As we can see on the chart, the price of ETH is now above the 100 hourly Simple Moving Average. Immediate resistance lies near the $1,920 level. The first major resistance was formed around $1,940. A clear move above this level could trigger a sustained rise to $2,000. If the bulls fail to break above the resistance at $1,940, ETH could start a downward correction. Initial support in this case will be located near the $1,880 zone and the main trend line. The next major support has already formed around $1,855. The main support is now near $1,800.

SOL Relies on Bulls and Aims at $45

The past week has proven to be extremely favorable for the overall value of the coin as the ETH trend clearly resonates within the SOL investor community. The bulls have successfully taken the coin above the $43 level and are holding the initiative despite the drawdown to $42.39 on Wednesday. At the time of writing, SOL is trading at $43.59 and is up 7.94% weekly. On the daily chart of the coin, an increase in buying pressure is noticeable. The bears are clearly fighting for dominance, but SOL volatility is moderate, so the chance of a sharp breakout or fall is minimal right now. 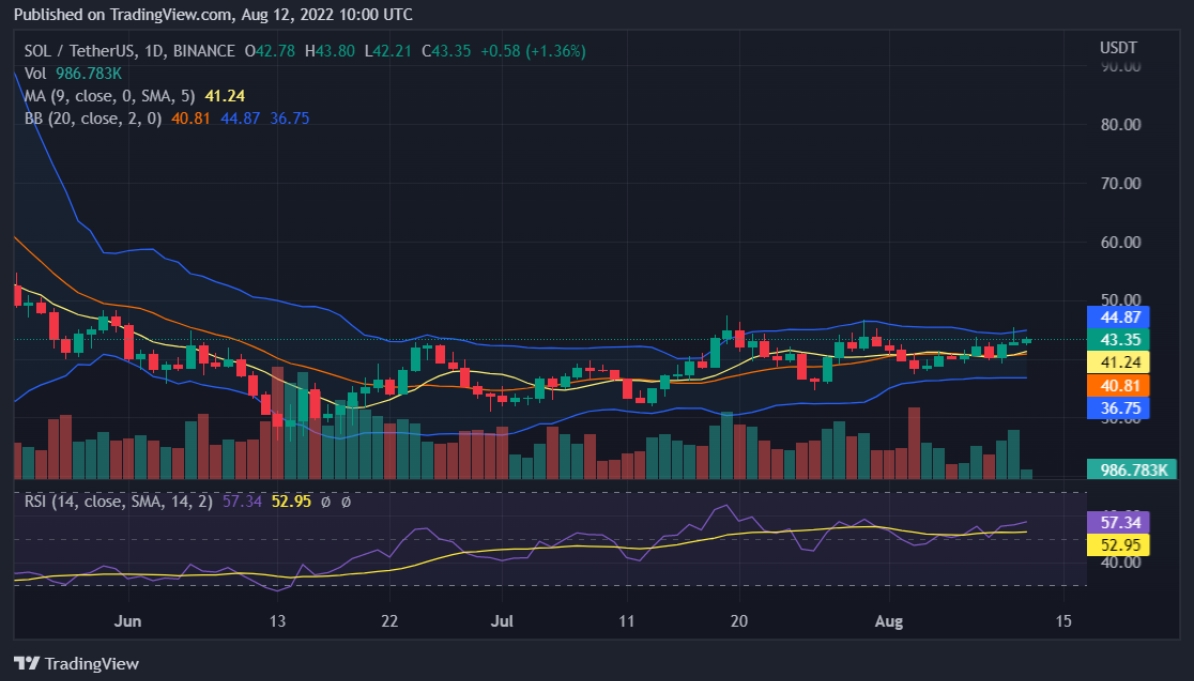 The moving average (MA) is at $41.24 above the SMA 50 curve. The value of the upper Bollinger band increased to $44.87, where the current resistance is, while the value of the lower dropped to $36.7, where the main support is located. At the same time, the Relative Strength Index (RSI) rose to 57, which indicates the dominance of buyers, that is, the immediate prospect of the asset directly depends on the actions of the bulls.