It seems that 2022 will become the record for the most disturbing news in the history of crypto. This week we have witnessed another dramatic story, as the major US crypto exchange FTX, founded by crypto wunderkind Sam Bankman-Freed, faced a collapse in the liquidity of its native FTT token and was on the verge of bankruptcy. This event immediately played in turn of the bears, who staged cascading sales of major digital assets on a number of large trading platforms, which led to a collapse in the price of crypto and for the first time since 2020, Bitcoin collapsed to $15,700. At the same time, the analytical group from JPMorgan Chase & Co has already warned Bitcoin hodlers that the price bottom of the flagship may be even lower — at around $13,000. Against the backdrop of a prolonged market collapse, most of the long-term holders of digital assets from the TOP-10 list turned out to be at a loss, although analysts predict that the altcoin market has every chance of a fairly quick recovery. Therefore, today we will briefly assess the position of the flagship and look at the ADA/USDT and MATIC/USDT pairs, which are relatively autonomous and have good potential for recovery, despite the distressed digital currency market.

Today, more than a third of BTC coins are unprofitable for their long-term holders (LTH), which is a record value in the history of the flagship coin, according to Glassnode network analyst. Moreover, approximately the same situation, but on a smaller scale, is also observed with short-term coin holders (STH). In fact, 35.4% of LTH’s supply of BTC, which is more than 5.9 million coins, has been unprofitable since November 9, but their value on November 10 fell by only 1% on average. As for STH, now about 17% of the coins they own are unprofitable, and as of November 9, STH profit is only 0.06% of the supply. 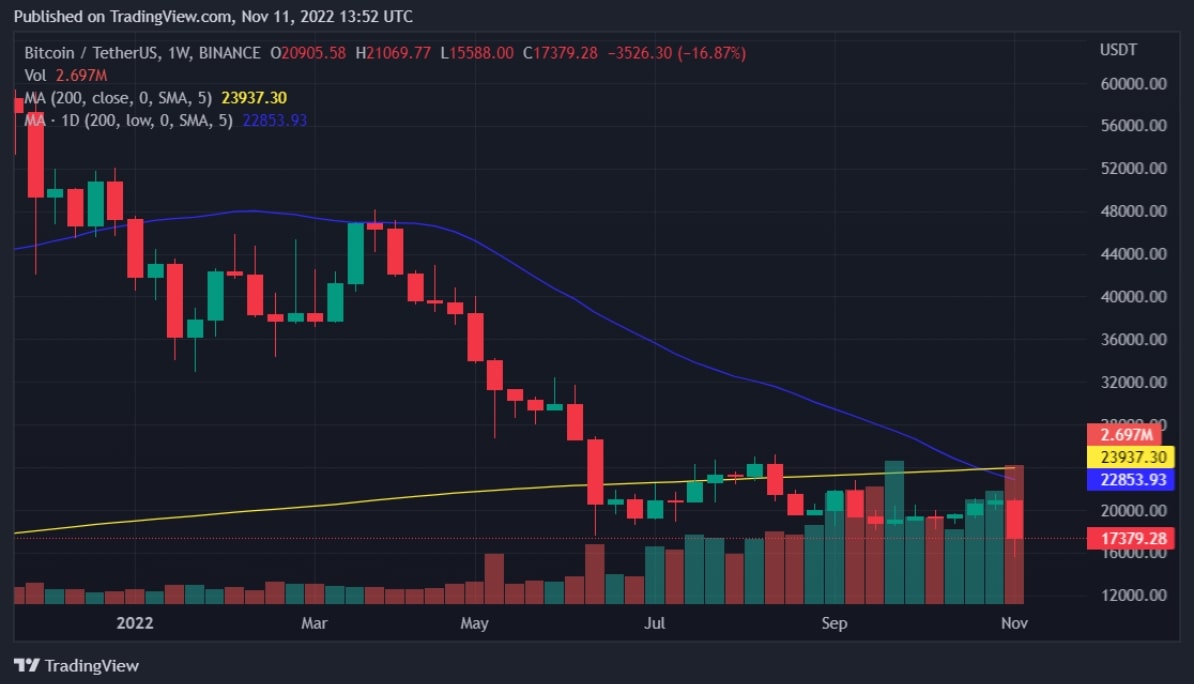 But the current collapse of BTC cannot be considered a one-time effect, as the 200-day moving average (MA) of the asset fell below its 200-week counterpart for the first time in history. This means that over the past 200 days, the price of the flagship in relative terms has been uniquely low compared to historical models. It is important to understand that the 200-week MA is a key bear market price line that Bitcoin has, however, consistently broken this year, going lower with each market crash. However, the trend line of the coin still continues to rise and has never declined in the entire history of the asset.

ADA price action met with resistance at $0.38, so the price of the coin is gradually returning to $0.35 as the bulls recover from weekly losses. However, the price decline is slowing down and over the past 24 hours, the price has decreased by only 3.6%, which can be called a controlled fall. However, the market crisis continues to affect the price of ADA, so now 12 of the 26 main technical indicators support the bearish position. On the other hand, only 5 indicators support the bulls, showing a weak presence in the last hours. At the same time, 9 remaining indicators show neutral indicators. 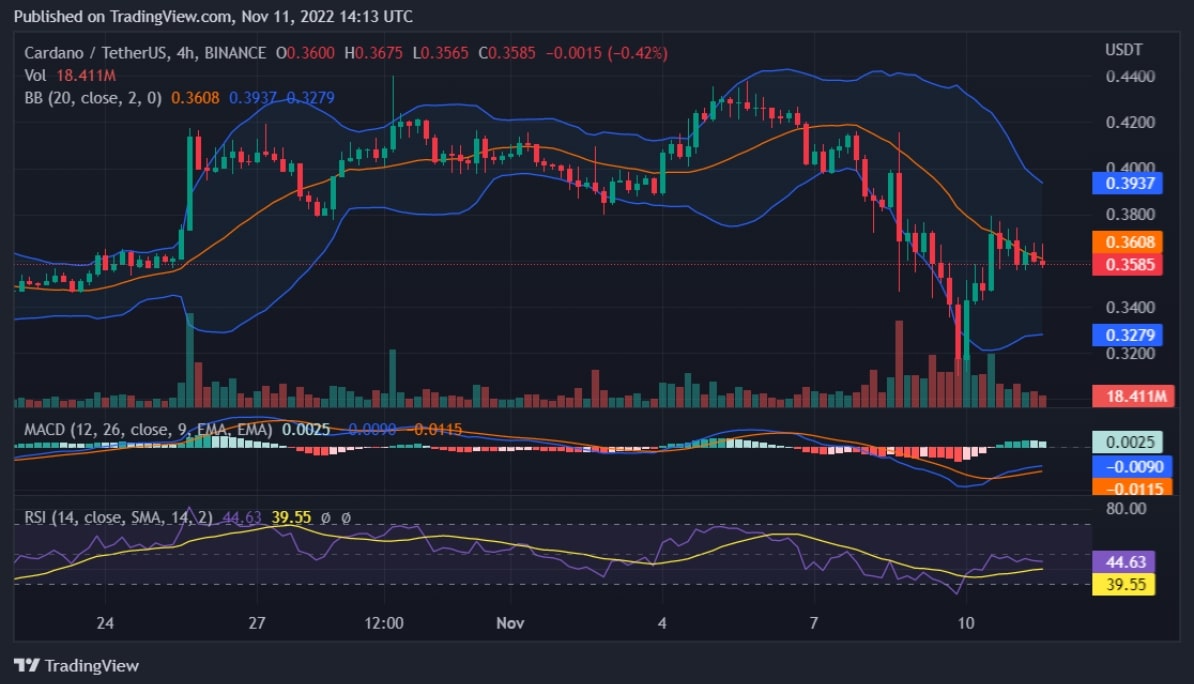 The MACD is currently bullish, as indicated by the green color of the histogram, while the RSI is moving with a horizontal slope, indicating low momentum on both sides of the market. At the same time, Bollinger Bands point to the nearest major support at around $0.3279 and the main resistance at $0.3937. However, we have already seen ADA rebound after hitting $0.32, so the bulls are now looking to reclaim the $0.36 support while the bears are holding firm around $0.38. If the bulls manage to overcome the $0.38 mark, the next target will be the $0.40 level, which is still worth getting ready for.

The Main Events for MATIC Will Occur at the $1 Level

In the long term, Polygon was in an uptrend but faced a sudden bearish momentum when FTX announced an FTT liquidity crunch. However, market experts believe that this event will not have a long-term effect on MATIC. During the week, the coin faced resistance around $1.25 and was pushed back to strong short-term support around $0.76. Now the asset is trading near $1, and daily candles were formed during the week above the upper limit of the Bollinger bands. 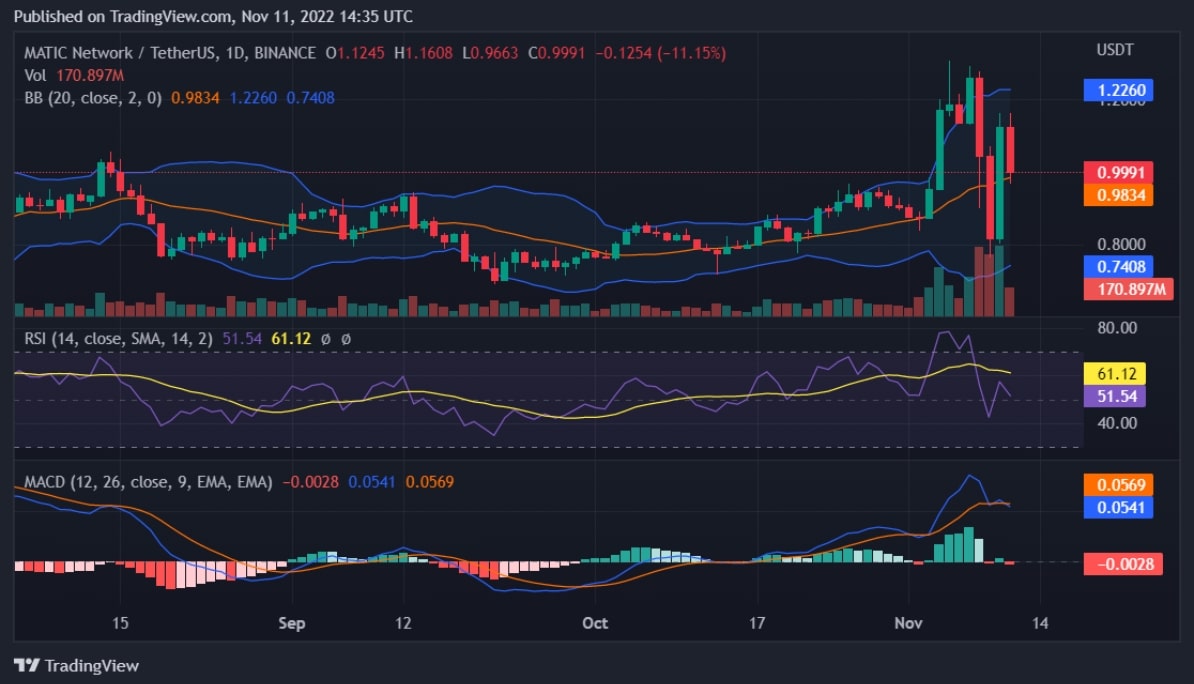 Most of the technical indicators of the coin are currently neutral, so it is too early to talk about investing in it. However, higher highs are being formed on the weekly MATIC chart, so the $1 level will be the decisive level in the long run.