Two BTC Movement Scenarios, LINK Uptrend and DOT “At a Low Start”: Results of the Trading Week and Expert Forecasts

Exactly a month has passed since the key market cryptocurrency began trading in a narrow price range between $28,000 and $32,000, and so far this trend has not changed. Altcoins, with rare exceptions, also move in a static framework, which significantly affects the market capitalization, which is gradually returning to the levels of July-August last year and now stands at $1.226 trillion. Crypto traders and investors are still waiting for an update on interest rate hikes due to inflation by the US Federal Reserve. According to crypto-analyst @PlanC, there are the following scenarios for the behavior of the crypto market, depending on the growth of interest rates:

Pessimistic forecasts suggest that in the worst case, BTC could lose 50% of its current value. Many experts believe that this will lead to a symmetrical collapse of the altcoin market, but not everything is so clear. Practice shows that many classic scenarios do not work in a stagnating market, so today we will do without predictions and consider the technical indicators of the most interesting coins of the week.

Will the Main BTC Support Work in a Critical Case?

Bullish market experts argue that bears in the crypto gold market are exhausted. This is indicated by the downward volatility of the coin, which has been gradually decreasing since the end of April. This may be a signal for a trend reversal, but strong support is needed to change the dominant. From November to April, BTC didn't have much support to rely on as bears ramped up en masse and traders anticipated a bounce off the 50-week moving average. Now we see significant support for a rebound around $28,000. 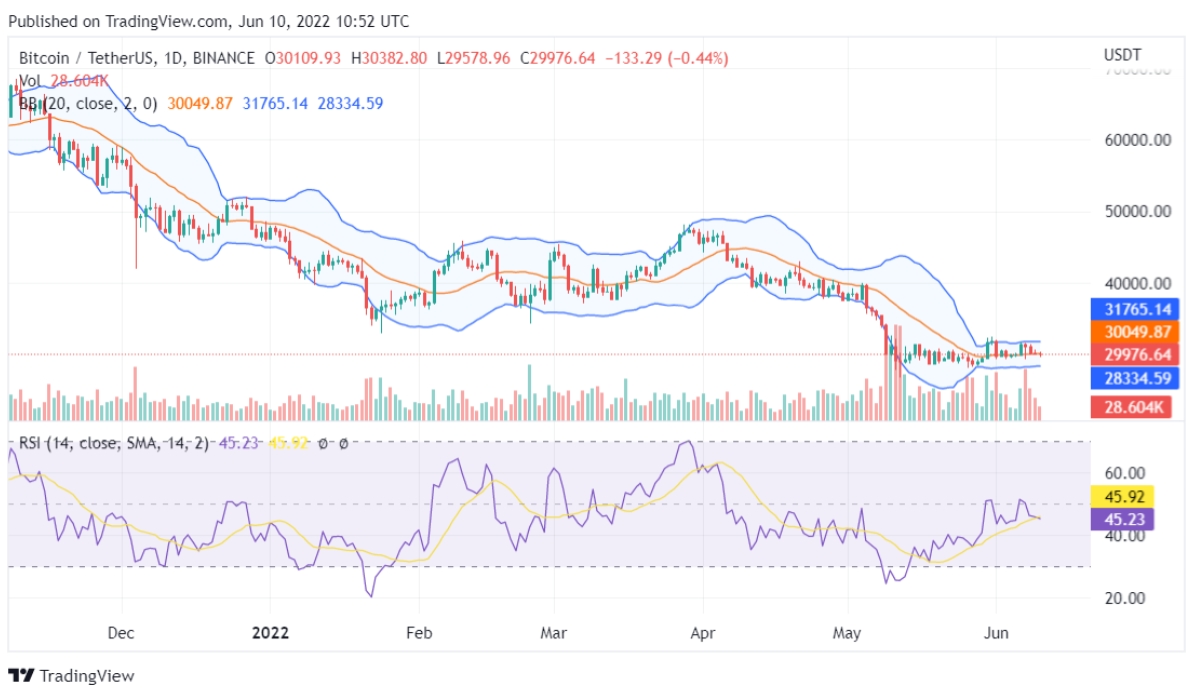 The price of Bitcoin has already touched the lower border of the Bollinger Bands (BB) channel, and the RSI has turned up, which indicates the possibility of a trend reversal. In fact, BTC is oversold and the efforts of the bulls can send the asset’s price to the $40,000 mark. However, crypto expert @MarkYusko suggests that the movement of crypto-gold may follow a descending triangle scenario, which could lead to a fall in the price of the crypto to $15,000. By the way, an open survey from Yusko shows that most of the 1000 traders surveyed are preparing precisely to such a scenario.

Promising altcoin Chainlink (LINK) during the week shows paradoxically high growth dynamics contrary to market trends. Just today, it has lost 3% of its value, but for the week its gain was 31.49%, and the price rose from $7.72 on Monday to $9.5 on Thursday. Analysts say that the next target for LINK will be $10, although it has now corrected to $8.86. At the moment, the 9 moving average (MA) has crossed the 20 MA, which is a bullish sign and means that the coin’s rally will continue. 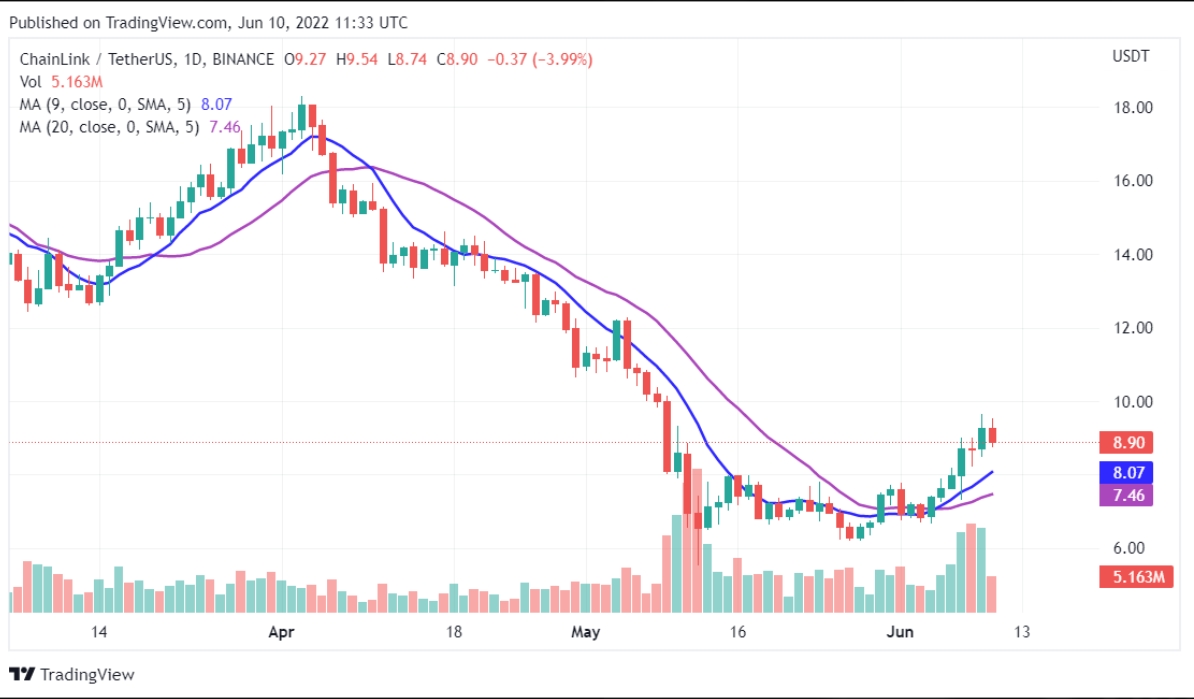 The coin is currently ranked 20th on the CoinMarketCap list with the largest market capitalization. If the price of LINK breaks the $10 barrier, there will be enough bullish momentum to move closer to the next resistance by about $12. Otherwise, we expect a bearish scenario with a return to the main support at $7.80.

DOT Prepares for a Pivot

Analytical data on the 4-hour chart of the DOT/USD pair indicates that the coin market is in a consolidation phase. The token is trading in the range from $9.06 to $10, but experts are still cautious in their forecasts, since the direction of the future movement will be the result of the current trading session within the established framework. However, the consolidation phase is already coming to an end. A break above $10 will signal bullish dominance and the DOT/USD pair is likely to move higher. On the other hand, a break below $9.06 would be a direct indication that the bears are in control and the price of the token is likely to turn to the downside. 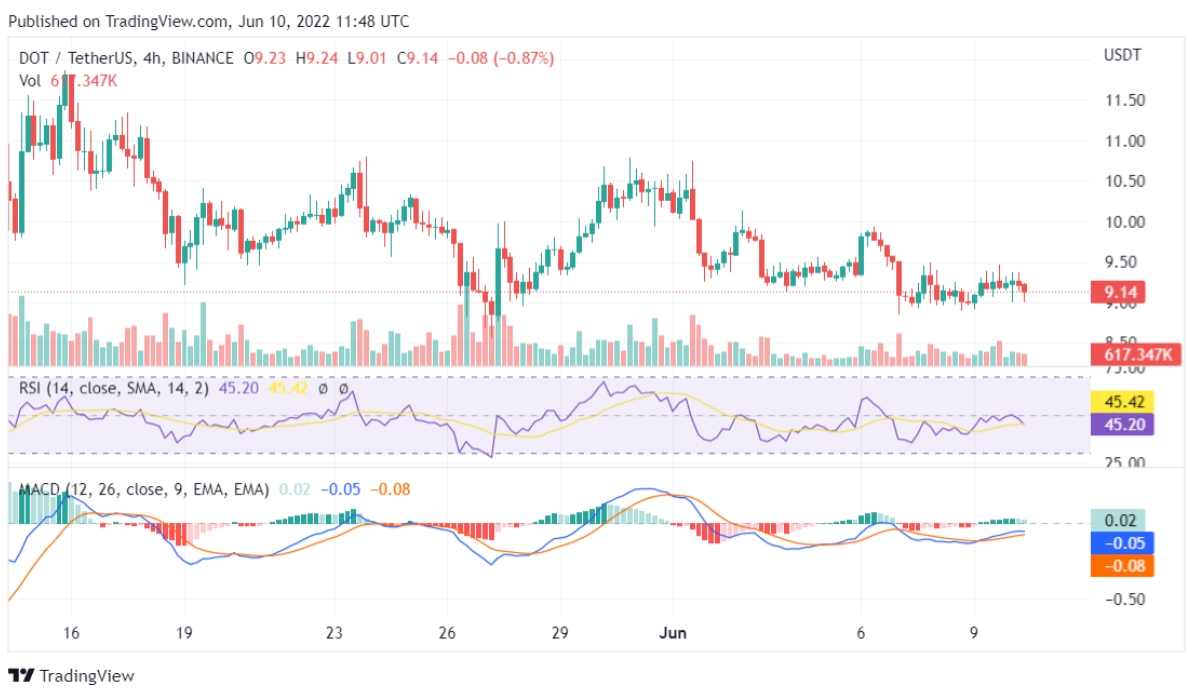 The RSI is currently at 45, indicating a neutral position for buyers and sellers. But the price is quite volatile, which may indicate that the trend will cross the Bollinger Bands in the near future. If DOT fails to break through the resistance at $10, the price is likely to strengthen near the immediate support at $8.