BTC Fights for $20,000, but BCH and BNB Are Under Bear Control Again: Results of the Trading Week and Expert Forecasts

The first trading week of October did not bring significant changes to the state of affairs in the crypto market. Despite the milestone events of the past month, such as the updates to the ETH and ADA blockchains, there have been no fundamental price movements in the altcoin market. The same can be said for BTC, which is returning below $20,000 by the end of the week, although it had been aggressively fighting resistance at this level for three days before and even reached $20,405 during one of yesterday's bullish rolls. However, the crypto-flagship fails to stay at this level, since at the moment the coin is directly dependent on macroeconomic factors. Referring to the impending economic and energy crises, many analysts come to the conclusion that even in the current situation, the price of Bitcoin has not yet reached the bottom. Moreover, some market analysts claim that the “fair price” of crypto-gold (the M1 price or the total of liabilities and assets invested in an asset) is currently $1,500, which is much lower than during the ICO era in 2017. Does this data mean the irreversibility of critical changes in the crypto currency market? Most likely not, because the ambitions of investors do not evaporate out of the blue. Well, in order to determine the trends of market movement, it’s first worth considering the current state of affairs, which we will do next.

BTC Bulls Keep Trying to Break Through the Main Resistance

During the week, BTC made two attempts to break the resistance around $20,400 but failed. And even though key resistance at $20,000 has been breached more than five times over the past week, neither bulls nor bears have been able to significantly disrupt the trend. Referring to the narrowing of the Bollinger bands, many experts now suggest that the price movement should undergo drastic changes until the trend reverses. This forecast is also supported by Michael van de Poppe from Eight, however, he argues this with today's publication of data on unemployment in the US, which can influence the decision of the US Federal Reserve in the near future. 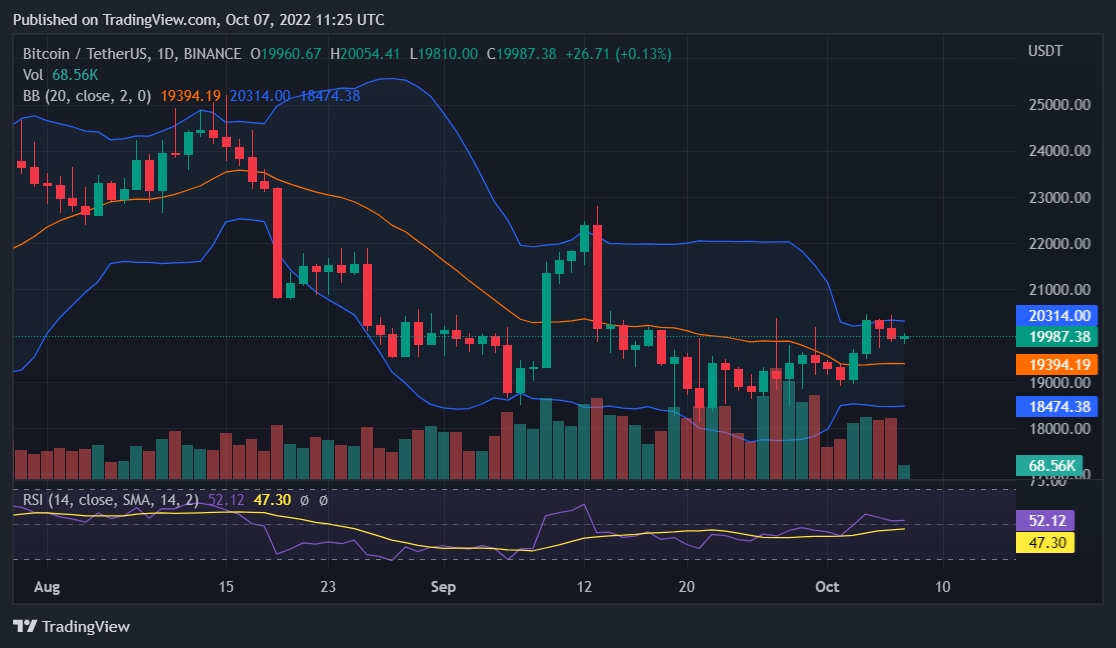 The narrowing of the Bollinger bands is also a sign of increased volatility, so the market will be unstable in the near future. However, the RSI remains above its midline, so market fluctuations will continue to be diluted by bullish breakout attempts. At the moment, the mark of $20,380 is one of the main levels of asset consolidation for market whales. Any solid break in this zone could trigger a rally, but so far there is no sign of a bull run on the chart.

Dangerous BCH Levels: What Investors Should Beware Of

Between the bullish run on July 29 and the crash on September 19, BCH lost about 35.5% of its value. This was followed by an increase of 17.40%, but after that the price of the asset fell into a clear trading framework. The current price range of the coin is between $96 and $166. The main resistance for BCH is now located at $125, with support formed around $112. Despite the upbeat CCI and Stoch RSI readings, $125 continues to be a significant barrier for bulls. And even taking into account the optimism of market analysts, the BCH money flow index has a negative slope, which indicates an increase in the speed of sales. 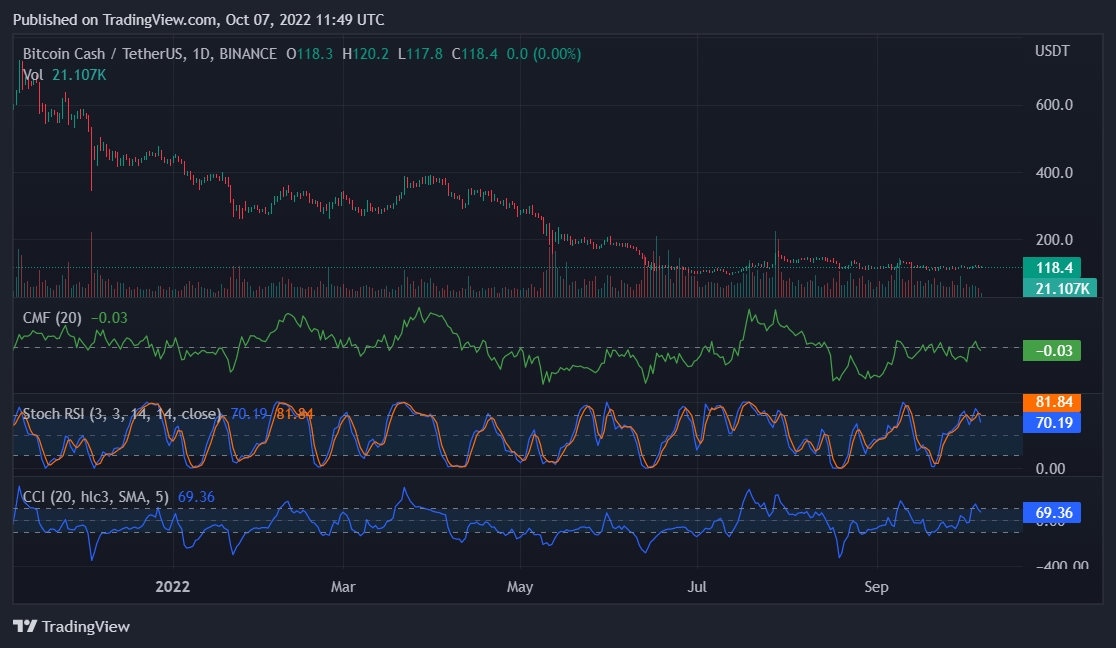 The BCH support line remains unchanged. However, traders and investors are now actively aiming for the $125.9 and $138.8 levels, which are massive resistances for buyers. On August 23 and September 9, these marks were successfully broken, but the bulls could not hold the breakout, which led to the price drop to $112. It is worth considering that investors may perceive the break of the $125.9 barrier as a psychological signal to buy. On the 4-hour chart, a small uptrend is developing after the fall on September 13th. The bulls can keep their momentum and eventually break through the indicated resistance levels, but for this, today's session must end up growing.

In mid-September, BNB fell to lower support at $262 and failed to break out, creating a new consolidation range with key resistance at the $300 position. Now the coin is actively trading at $284, but the surge in trading volume only supports the bearish cycle, as the news of the Bridge network hack has been actively spreading in the crypto community. Currently, the daily candle explains the 3.9% drop in BNB daily value, which is a continuation of the bearish influence. 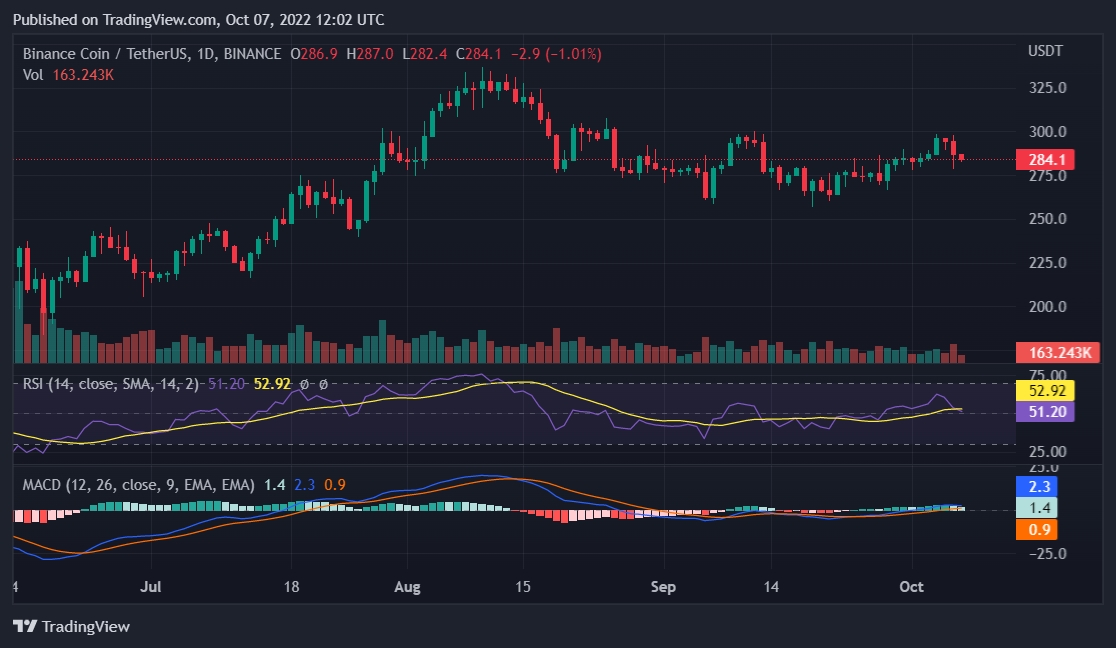 The RSI is now almost touching the midline and is reversing within the overbought zone, reflecting the weakness of the bullish momentum. In addition, a reversal within the fast and slow lines indicates the possibility of a bearish crossover in the MACD indicator. Thus, the bears continue to dominate the BNB market.