BTC Before Key Resistance, First Steps of New LUNA and Bearish SOL: Results of the Week and Expert Forecasts

The outgoing week on the crypto market started quite cheerfully, confirming the optimistic forecasts for the movement of BTC and ETH. But as in the past 4 weeks, closer to the weekend, the Bears were able to take the initiative and key assets returned to their established price levels, against which the trading volume decreased from $99 billion per day on Tuesday to $66 billion on Friday. The main attention of market experts is now focused on the updated LUNA coin of the Terra 2.0 project. This is the first fork of a collapsed blockchain in the history of the crypto, and the asset is showing positive dynamics, despite the lack of expected price spikes. But whether this fact motivates new market players to invest in LUNA is not yet clear. For more than a month now, the cryptocurrency market has been in a "limp state", despite the fact that during this time digital money is actively considered as a hedge asset in some developing countries. In many ways, this position of crypto is influenced by the global food and energy crises due to the RF's invasion of Ukraine: regulators continue to tighten control over digital money, trying to keep fiats afloat at record inflation rates. How are the indicators of key crypto-assets changing against this background? Let's get into the details. 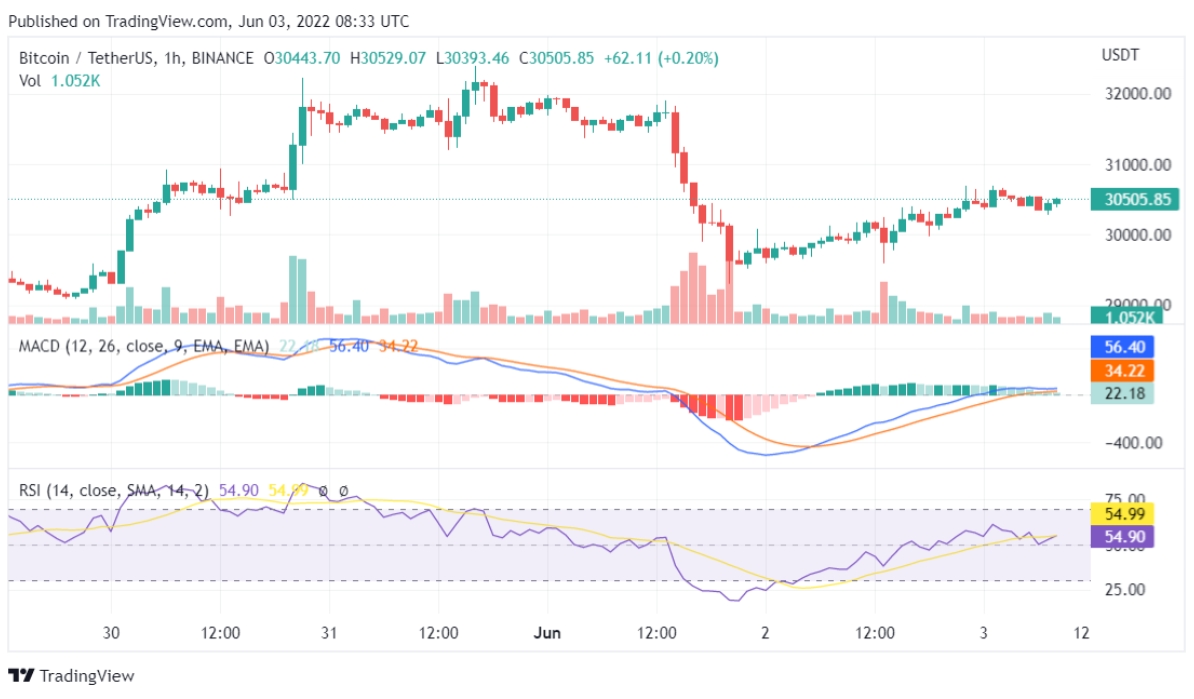 Indicators show that the nearest immediate resistance is near the $30,800 level, and the main resistance is indeed concentrated at $31,000 and the 100 hourly simple moving average. At the same time, the RSI is below the 50 mark, which means the dominance of sales. If BTC fails to overcome the main resistance, the price may start a new downtrend with immediate support at around $30,000. The next major support in this scenario will be $29,350. A break below could trigger a local collapse to $28,250.

LUNA Is Consolidating, But Traders are Losing Interest

LUNA 2.0 is now almost 10% above its closing price at the end of yesterday's trading day, so crypto analysts are confident of continued gains over the weekend. On the other hand, the trading volumes of the coin and the volatility of the coin significantly decreased by Friday, which may indicate the loss of interest of traders in the asset for an indefinite period. This is evidenced by the statistics of the airdrop that took place last week: most traders simply liquidated the LUNA 2.0 tokens that were replaced during just 30 minutes after the start of the distribution. 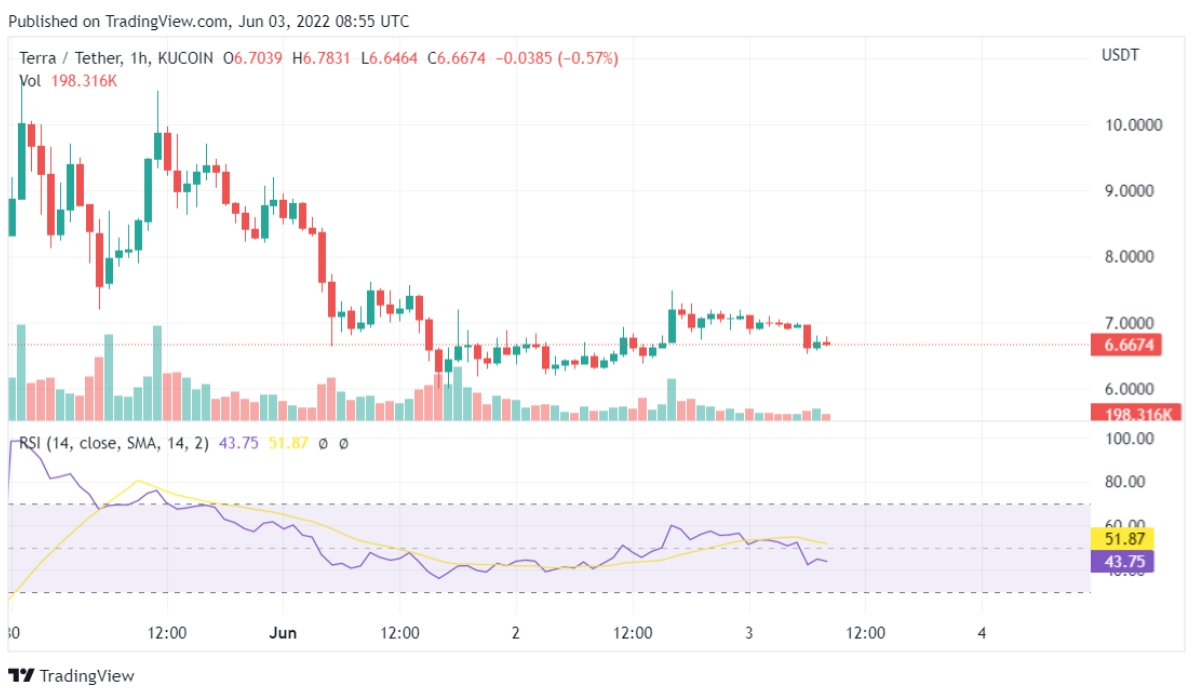 The airdrop occurred almost a week ago, but since then no notable buying and selling have been recorded. Therefore, experts assure that it’s not worth expecting a sharp boost in activity, as happened on the day of distribution, in the near future. Most likely LUNA 2.0 will continue to fluctuate within a narrow range, while remaining below $9 for quite some time.

Solana continues its downtrend after a brief respite above $50. The coin began to decline in parallel with BTC and has not been able to recover since. Now the token is trading at $39.63, its market capitalization is $13.5 billion, and the daily trading volume was $1.36 billion. The Parabolic SAR indicator below the candles indicates a continuation of the bearish momentum in the near term, while the MACD is signaling signs of a bearish crossover as the signal line has moved above the histogram. The RSI fell below the 50 level, but remains in the area of ​​uncertainty, indicating a possible increase in selling pressure. 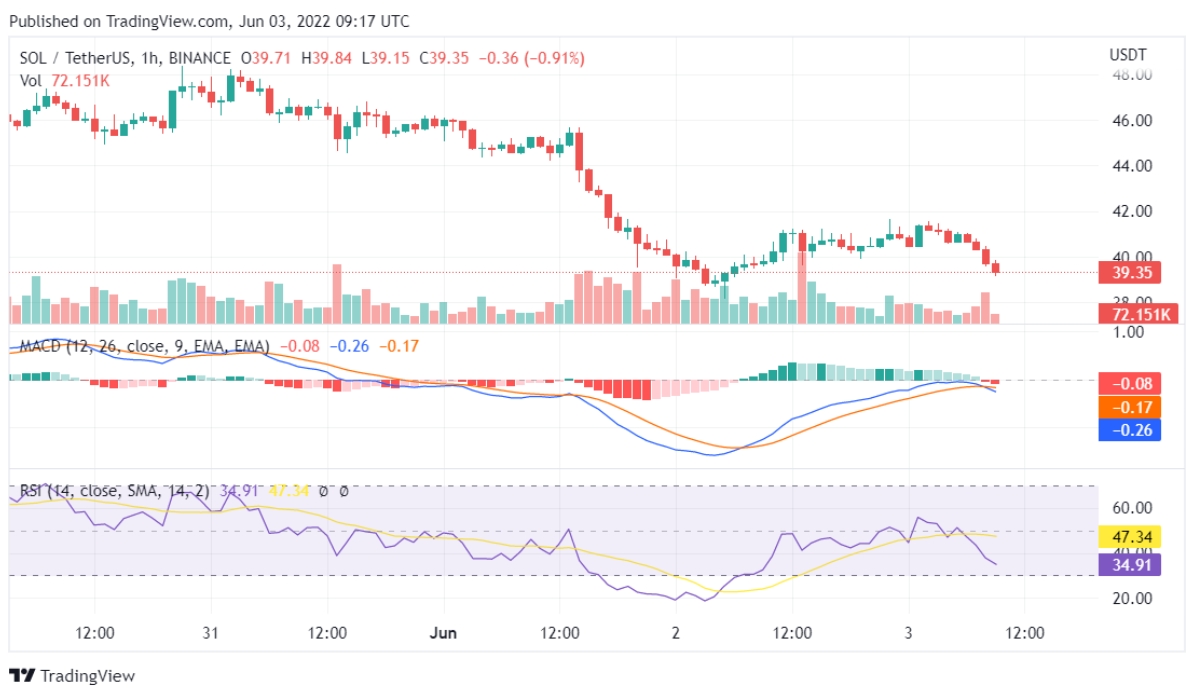 4-hour and 24-hour SOL price analysis suggests a bearish breakout in the near term. The token is likely to fall to support at $38. A break below this level could result in a fall to $35. But in the case of growth, the first serious resistance will be $44. Its breakout will pave the way for the $50 move.