Battle for BTC at $17,000, Retreating ETH and Warning from DOGE: Results of the Trading Week and Expert Forecasts

November turned out to be one of the most difficult months for the crypto market, even by the standards of the outgoing 2022, which was dramatic for the industry. The permanent outflow of capitalization, high-profile cuts in key crypto companies and the collapse of FTX combined to deprive many major players of confidence in the safe and speedy end of the crypto winter. However, it is important to understand that the macro-financial situation in the digital asset market during November stabilized rather than vice versa. Crypto-flagship and altcoins are fixed in new, low, but fixed ranges. Yes, bitcoin closed the month with -16%, but it’s worth remembering that the “big November collapse” occurred on the 8th-9th, that is, the current indicator characterizes the difference between the November and October markets, and not a drawdown during November. Nevertheless, market trends can hardly be called optimistic: the big scandal around Sam Bankman-Fried and FTX has already caused a cascade of high-profile bankruptcies and “showdowns” in the crypto community. Many crypto-lenders have already resorted to staff cuts, and large trading platforms have actively taken up the decentralization of investment and management assets. What will be the last month of this terrible year? Let's try to predict this based on the current performance of the main digital assets.

Since falling last week to a two-year low and trading sideways over the weekend at $16,500, the flagship cryptocurrency has shown signs of a minor recovery amid speculation that this bearish cycle may be coming to an end. This led to prices rising above $17,000 and a successful “counteroffensive” of the bulls, who were able to push the price of BTC to its highest level in more than two weeks - $17,250 (according to Bitstamp). However, the bears intercepted this movement and pushed BTC south again. At the moment, Bitcoin is trading above $16,950, having lost just under 1% in a day. 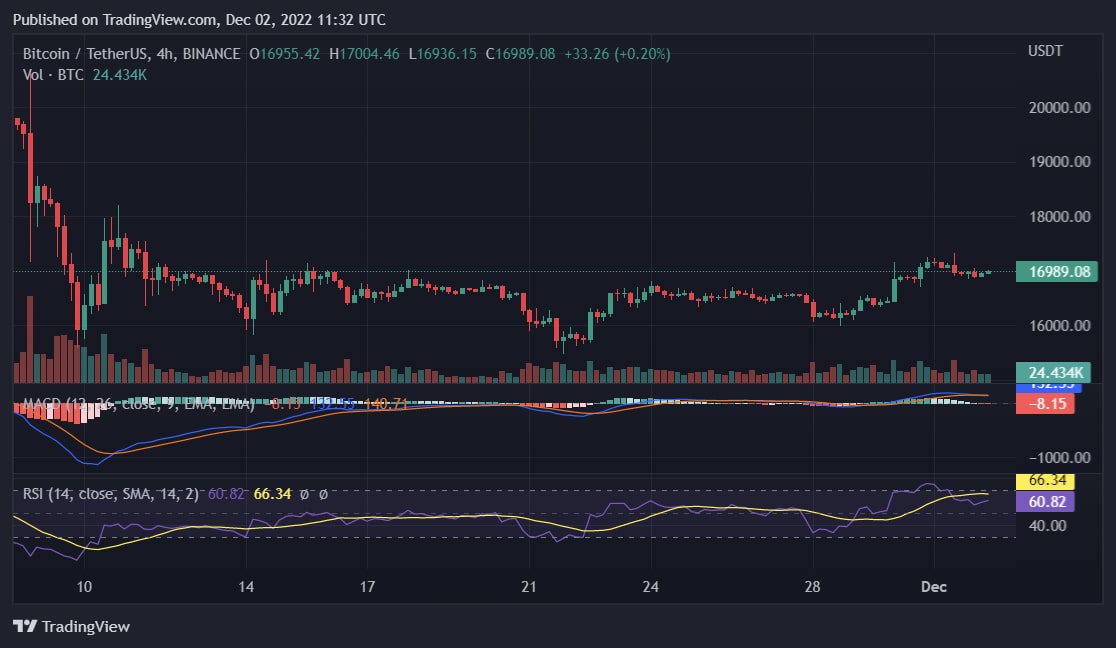 According to the MACD data on the 4-hour chart, we see that the bulls are losing the initiative and the transition to the end of the trading week, traditionally, will entail a decrease in trading volume. At the same time, the RSI indicates a continuation of the uptrend, however, it is likely to be rather sluggish. It is also worth noting that BTC consistently lost market dominance throughout November and became more subject to fundamental changes. Some analysts believe that such behavior of the flagship may signal a further loss of the coin’s capitalization due to large-scale sales, however, there are still few direct facts indicating this.

The Downtrend of ETH Will Continue in the Long Term

Crypto Silver has continued its downtrend since last November. According to the analysis of the Heikin-Ashi weekly candle, the pressure of sellers and buyers at the end of the week came to a certain balance, but the negative weekly MACD is still forming a positive histogram. At the same time, the weekly RSI fluctuates below 50, while the asset price is still below the 50 SMMA line. However, on the daily candlestick chart, the movement is more concrete. The price fluctuates within the $1,290 zone and also below the 50 SMMA ($1,393.62). The price rests against previous resistance zones, but gradually overcomes them, which in the short term indicates the initiative of buyers. 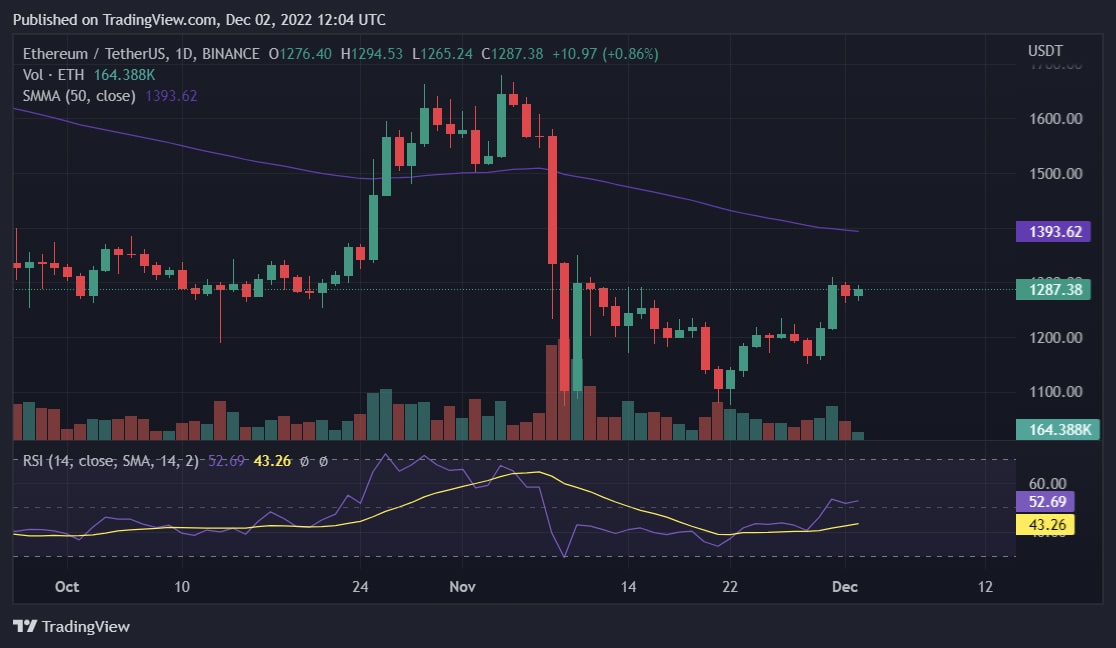 However, keep in mind that SMMA 50 above the price chart means that the market is dominated by bears in the long term. One of the best proofs of this is the generation of the Short signal by the TFLOW V2 algorithm. But at the time of writing, ETH is showing good growth momentum. On a daily scale, the MACD continues to be negative, but the histogram is positive. The RSI is hovering above 50 and trading volume hasn't dropped significantly.

Does a DOGE Bounce Indicate a Market Sell-Off Is Coming?

Even though BTC and many alts seem to have found a foothold despite increased credit risk due to the FTX crash, there is still one factor that suggests the downtrend is not yet over. We are talking about DOGE, which has grown by 40% over the past 10 days, outperforming ETH by 18% and BTC by 8%. Some analysts point out that every time after Dogecoin has tangibly pulled up, the market was expecting a massive sell-off. 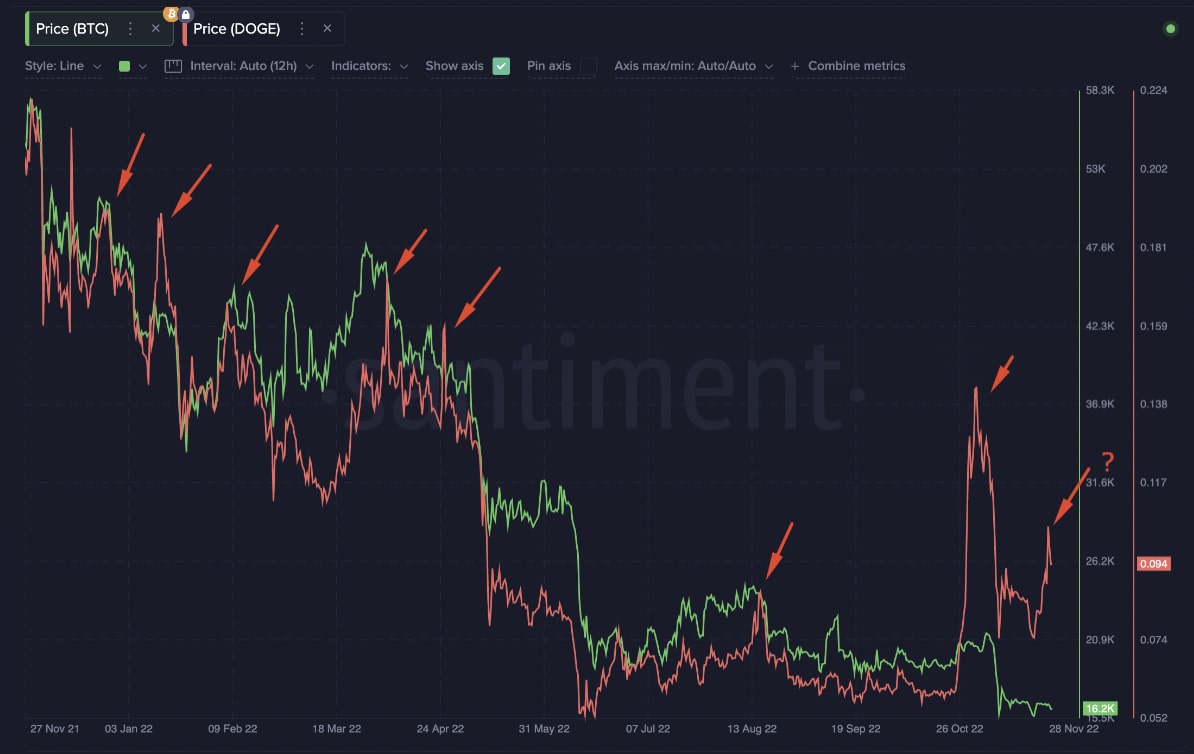 According to Santiment, we are now seeing a classic DOGE gap from the BTC price, which may well be an indicator of another sell-off. However, one should not unequivocally react to such a dependence, since the indicators on the Bitcoin chart do not give such an unambiguous indication of a local collapse. That is, most likely, we are dealing with a correlation, so you should not take it into account in your trading strategy as a separate signal.