BTC in Bulls Hands, Optimistic ETH and SOL on the Way to the Return $40: Results of the Trading Week and Expert Forecasts

It seems that the uncertainty in the crypto market is gradually subsiding, taking away from the bears their main trump card — panic in newbie circles. After the biggest crash last week, BTC is slowly recovering its positions, and most experts are sure that the bottom of the current cycle has already been reached, so we should expect a confident trend reversal further. Changpeng Zhao, the richest crypto billionaire and Binance CEO, in an interview with The Guardian claims that the crypto flagship is already on its way to recovering $69,000, but this process could take from several months to several years. These are rather serious terms, but the probability of ATH return directly depends on the confidence of large hodlers, such as MicroStrategy. Fortunately, while their positions are still unshakable. The remission of the altcoin market is not so clear, but some coins still return to their “former glory,” gaining a foothold due to increased buying pressure. Low prices for digital assets are attractive to most market players, so new support zones are actively appearing on the charts of some alts. Is a minor remission a buy signal? Let's get into the details.

Bitcoin is still in the price range of three weeks ago, but after the massive collapse on June 18, the $20,000, $21,000 and $21,500 marks have a completely different meaning. The weakening of sellers came face to face with active buying demand at $21,000, where the main local resistance seems to have formed. At the same time, BTC regularly bounces up, dropping just below $20,000, which is an indicator of the presence of a bull trap. The emerging divergence of the Bollinger bands and the bullish divergence on the RSI indicate the possibility of a small breakout, so the next such bounce could be realized as a bullish momentum. 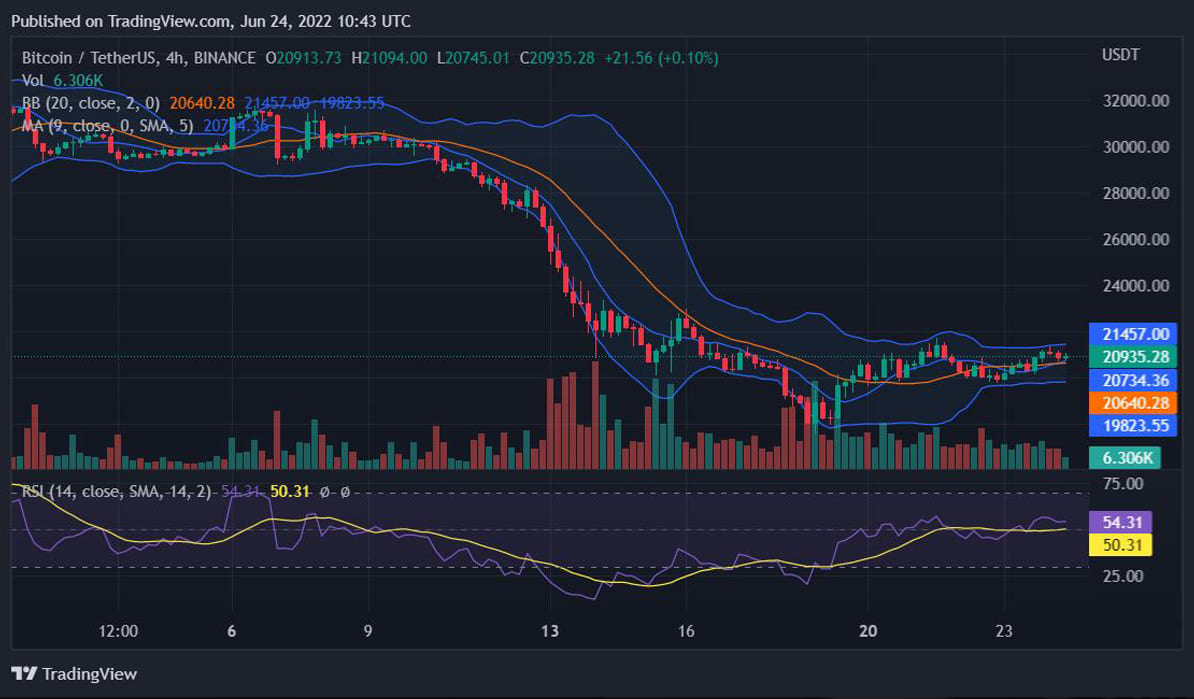 At the moment, the price of BTC on the hourly charts is moving in an upward price channel towards the resistance in the $21,280 area. If the bulls fail to overcome it and reach the $21,500 zone, traders will most likely begin to actively sell the coin, which may push the price to return to the levels about $17,000. In the optimistic scenario, if the bulls manage to properly coordinate efforts, we will see an uptrend to $22,000, but so far, most likely, without consolidation, since it is too early to dream of a rally to new heights.

ETH Consolidates Above $1,100: Should We Expect a Bull Run?

Ethereum is posting a solid 3.6% daily gain and consolidating above the resistance at $1,100, which can be considered the first major breakout since falling below $1,000 last week. Over the past 24 hours, the trading volume of the coin fell by 0.9%, while in parallel with this, its market capitalization increased by 5.3%. At the moment, the ratio of trading volume to capitalization is 0.1073, and market dominance has grown to 14.91%.

And a bit of technical analysis. The RSI on the crypto silver chart is still below 34, but is gradually recovering from falling to 20 during the market crash. The movement of the indicator is still sluggish, but indicates growing bullish activity. At the same time, the MACD line broke through the signal line, which confirms the bullish divergence on the chart, but the movement in the lower part of the Bollinger bands indicates the possibility of testing the middle zone. However, most market experts agree that in the near future the $1,200 mark will still be able to return.

On the SOL chart, we see that the MACD remains above the signal line, while the MACD histogram remains bullish. The RSI below 49, hinting that the bulls are not giving up and are about to take over the price action of the SOL token. However, the price of the coin has broken above the middle zone of the Bollinger Bands, so it will rise if buyers maintain control of the coin. Thus, with a very high probability, Solana will reach $40 already today, while the bulls have every chance to continue the rally to $50.