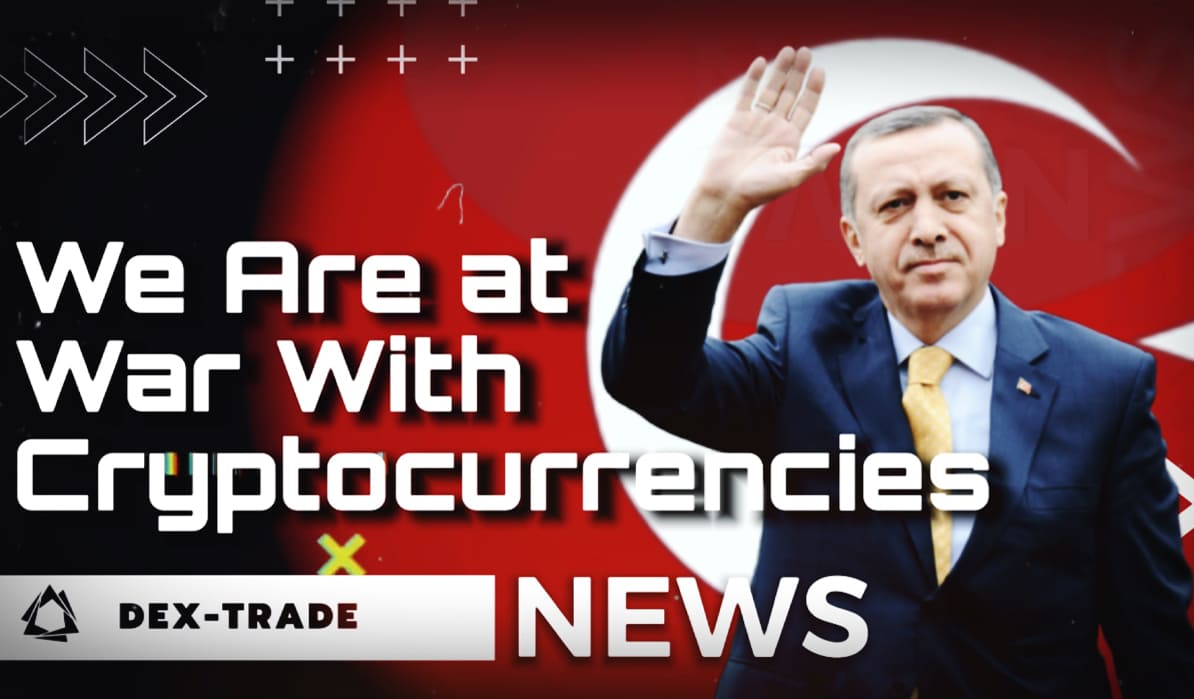 "We Are at War With Cryptocurrencies": a Loud Statement From The President of Turkey

At a Q&A meeting between Turkish President Recep Tayyib Erdogan and the country's young population, one of the participants referred to the Digital Turkish Lira cooperation platform announced last week and asked if the Central Bank would accept digital money, to which the head of the country replied "We have absolutely no intention of embracing cryptocurrencies." Cointelegraph reports. “On the contrary, we have a separate war, a separate fight against them. We would never lend support to [cryptocurrencies]. Because we will move forward with our own currency that has its own identity.” — Erdogan stressed. In turn, the former Prime Minister of Turkey and Deputy Chairman of the ruling party, in his commentary on this issue, clarified that electronic money requires strict regulation due to the high potential risks. "It's like selling a fictitious future." — said the politician. Turkey first announced plans to create a national blockchain infrastructure back in 2019. Then the government and local authorities took the side of the blockchain. However, the president's recent comments speak rather of the "end of a great era" of friendship with cryptocurrencies.

Bitcoin and the world's leading altcoins are rapidly losing value amid the bearish week for the S&P 500 stock index and the debt crisis of the Chinese real estate giant Evergrande. Decrypt reports. Digital gold prevented an adjustment last week, losing just 2.6% over the past seven days. However, over the previous 24 hours, its price dropped 7% to $44,500. This fact was skillfully used by the President of Salvador Nayib Bukele, inviting investors and traders to “buying the dip”, because the value of Bitcoin is still declining. It is noteworthy that since the adoption of BTC as legal means of payment in the country, its price has dropped by almost 14%. But the situation is even more sad with alternative coins. So Solana, which fell by 19.6% over the past week, lost another 13.5% in the last 24 hours during the "emergency" shutdown of the blockchain due to the work of cryptobots. And Ethereum, which recently crossed the $3,600 price mark, has fallen in price by about 8.3% in a week and by more than 9% in the last 24 hours. The main reason for the bearish cryptocurrency market is considered to be a drop in the S&P 500 stock index by almost 1%, with less than 75% of included stocks at the end of the trading week closed above their 200-day moving averages. This completed the fourth longest streak since 1928, according to Yahoo Finance.

Freddie Mercury's NFT Is Already on Sale at SuperRare

Founded by musicians and Queen's manager Jim Beach, the Mercury Phoenix Trust has announced the launch of sales of NFT art objects inspired by the band's frontman Freddie Mercury on the SuperRare marketplace. Cryptocoin.news reports. The musician's 75th birthday auction, which kicked off at 08:00 on September 20, 2021, will sell four artworks by artists such as Blake Catherine, Chad Knight, Mat Maitland and MBSJQ for 75 hours. "You can do whatever you want with my work, just never make me boring." — said the musician just a few days before his death. The proceeds from the auction will go directly to the Mercury Phoenix Trust, which was founded in memory of the late singer. Freddie Mercury died of AIDS-related pneumonia in 1991. Over the past twelve months, the foundation has donated a total of £579,021 (approximately $791,600) to fund various HIV initiatives around the world.