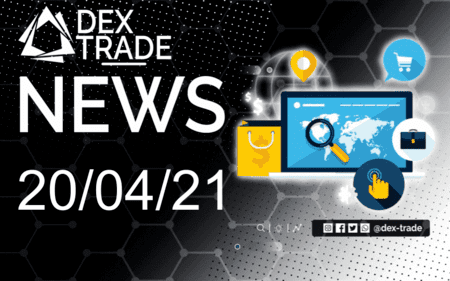 The crypto market started a slow recovery after the start of the week as investors ignored the correction of Bitcoin, leaving the rest of the market to itself. The following is a short overview of some of the more interesting news that made the headlines on Tuesday, April 20th, 2021.

After a significant weakening on April 18, Bitcoin kept losing momentum after falling back from its all-time highs of $65,000 to around $51,000. The weakening continued over the next few days and Bitcoin proved incapable of forming a lower resistance level. The market was still capable of forming a very long bottom wick and is currently testing the $51,000 area as a support level. The technical indicators have also started giving bearish signals as the MACD moved into the red zone, the RSI dipped below the 50 mark, and the Stochastic Oscillator formed a bearish crossover. Regardless of the given trends, the price of the main cryptocurrency has managed to make a comeback to significantly higher values from the lows and is attempting to form a rising low, which will be regarded as bullish trend as long as Bitcoin is trading above the $51,000 area of support.

Mark Zukerberg’s Facebook is preparing to start testing a stablecoin in 2021. The Swiss Diem Association will start testing the new coin from Facebook as a replacement for Libra. The testing will involve limited transactions between separate users to evaluate the scalability and operation of the coin. The operations in question will also involve the sale and purchase of various goods and services, as well as transfer the asset between each other’s wallets. No tentative date has yet been set for the start of testing.

Russian financial giant Sberbank has announced that it is ready to start launching its native Sbercoin digital asset on its proprietary blockchain network. Sberbank is currently discussing the launch and registration of the system with the regulators of the Russian Federation to ensure that the system is certified and allowed for application on the market. The bank has also stated that every product on offer on the new platform will be certified by the regulators and use of said products and the platform will not be restricted to clients of banks, but it will be made available to other banks and companies as well. The news comes as the Russian government has once again returned to the discussion regarding the launch of its own digital ruble.