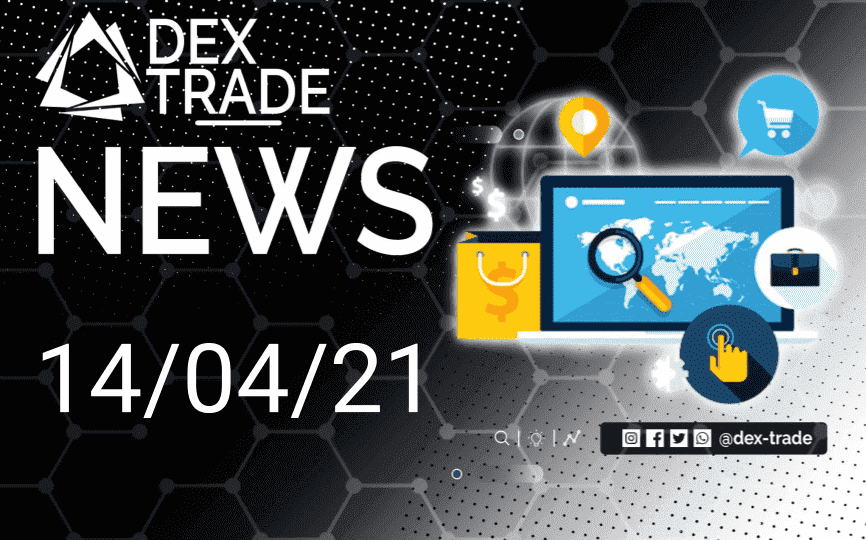 The working week had reached its zenith and the crypto market started winding down for the rest of the week. The following is an overview of some of the more interesting pieces of news that made the headlines on Wednesday, April 14th, 2021.

Bitcoin continues its victorious momentum up the price charts on Wednesday by reaching new heights. The king of cryptocurrencies topped the $61,500 barrier and approached the level of $64 854. The $65,000 mark is expected to be attained in the coming few hours. The vast majority of traders and analysts believe that Bitcoin will continue growing as the next resistance level is in the region of $68,000, which could be attained as early as next week.

The second largest cryptocurrency by market capitalization is also trailing Bitcoin with its price momentum. Ethereum is racing towards the historical maximum of $2,500 after consolidating above the psychologically significant $2,000 mark and testing a new all-time high at $2,397 during morning trading on Wednesday, April 14th. During intraday trading, the coin rose in price by almost 10% while the staking volume on the Ethereum 2.0 network has exceeded the $6 million mark. Most traders believe that Ethereum could well reach the $10,000 mark by the end of the year and continue growing as the DeFi market expands the launch of Ethereum 2.0 draws nearer.

The Americal Travala.com travel industry survey service conducted a poll among its subscribers and followers. The results of the survey revealed that 38% of Americans plan to travel more after the pandemic, with 71% expecting to spend more on travel than before the start of the global lockdown. Another 48% of respondents said that they are willing to spend more than their full salary while on vacation inside the US in the second half of 2021. 23% are willing to spend more than two full salaries on international travel. As for payment for travel services, over 22% said they plan to use cryptocurrencies to pay while traveling. Such numbers indicate the growing popularity of cryptocurrencies among American travelers and the fact that almost a quarter hold some form of digital assets capable of being used as means of payment.

One of the biggest American asset management companies – Grayscale – has reported that it surpassed $50 billion in cryptocurrency assets under management. The event comes as investors are rallying after Bitcoin in hopes of price growth and are diverting their assets to funds in hopes of attaining better yields.