The current week on the crypto market was marked by a clear division into groups of conditionally growing top assets and those coins that continued to fall in one form or another. In fact, the influence of the BTC movement has noticeably dropped after the massive sell-off on June 18, so promising altcoins have begun to depend more on local factors. This trend can also be seen in the price dynamics of ETH, which, however, has rarely shown as high volatility as the flagship. The price of crypto-silver during the week managed to gain a foothold above $1,000, crossed the $1,100 mark, and now the coin is trading above the $1,200 level with a local movement peak at $1,261.78 (according to CoinMarketCap). The capitalization of the cryptocurrency market has been consistently growing since July 4, having increased by $100 billion in five trading days — from $878.608 on Monday to $977.588 billion at the time of writing. It appears that much of the investment came from the reserves of the market giants as an anti-crisis measure during the crypto winter. Today we will analyze three fundamentally different coins, which will help to get an idea of the current state of the market from different angles.

This week, Bitcoin managed to strengthen above the significant resistance at $20,000, which can clearly be seen on the crypto market tracker from CoinMarketCap. Now crypto-gold is trading at $21,561, which indicates a daily price increase of 5.59%. The bulls appear to be aiming above the local high reached today at $22,230.9 and are gearing up for their first rally to $22,600 as a bullish pattern is clearly formed on the daily BTC chart. In addition, the morning surge above $22,000 has already become the biggest weekly gain in BTC since last October, and this is also clearly bullish. 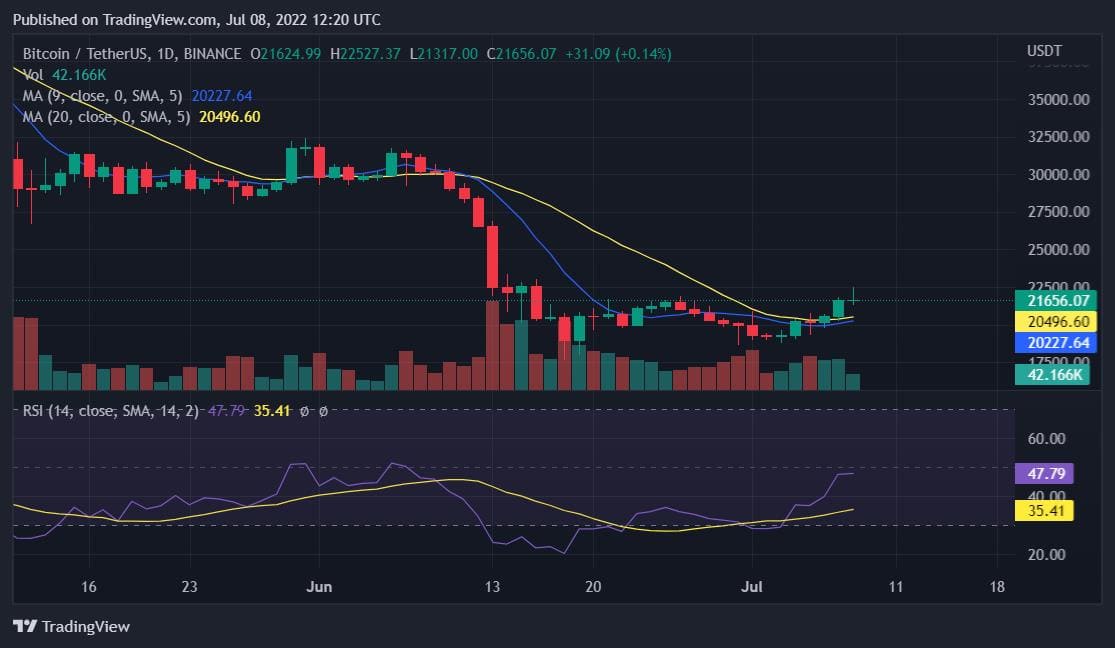 The chart clearly shows that the Relative Strength Index (RSI) is gradually rising and is located above the RSI SMA line. Both of these indicators can be considered bullish flags. And in addition to them, you can consider the Elliott Wave Theory indicator, which suggests that BTC can start an upward movement towards the $25,000 target, since the coin is now in the 5th wave of the Elliott cycle. But not all indicators synchronously point to an asset. Now the price of the flagship is approaching the bottom of the ascending triangle, which has played the role of resistance over the past 2 weeks. Also, the 9 Simple Moving Average (SMA) is below the 20 SMA, which is a bearish sign. However, the movement of the lines is clearly bullish and may accelerate after the price of BTC breaks the bottom of the last ascending triangle.

Since the beginning of the week, there has been a partial bullish impulse on Solana chart, but the bears continue to actively fight for the coin. Sellers have not yet exhausted their strength and SOL is likely to continue the devaluation movement in the coming days. However, the price of the coin for the week peaked at $39.32, then corrected to $36.71 and now continues to recover at $37.23. The daily increase in the value of the coin amounted to a slight 0.41%, however, over the week, Solana increased by 14.84% and took the second place in terms of the dynamics of the weekly increase among the TOP-10 coins after ETH. By the way, the coin continues to take 9th place in the rating of assets with the highest capitalization by CoinMarketCap. 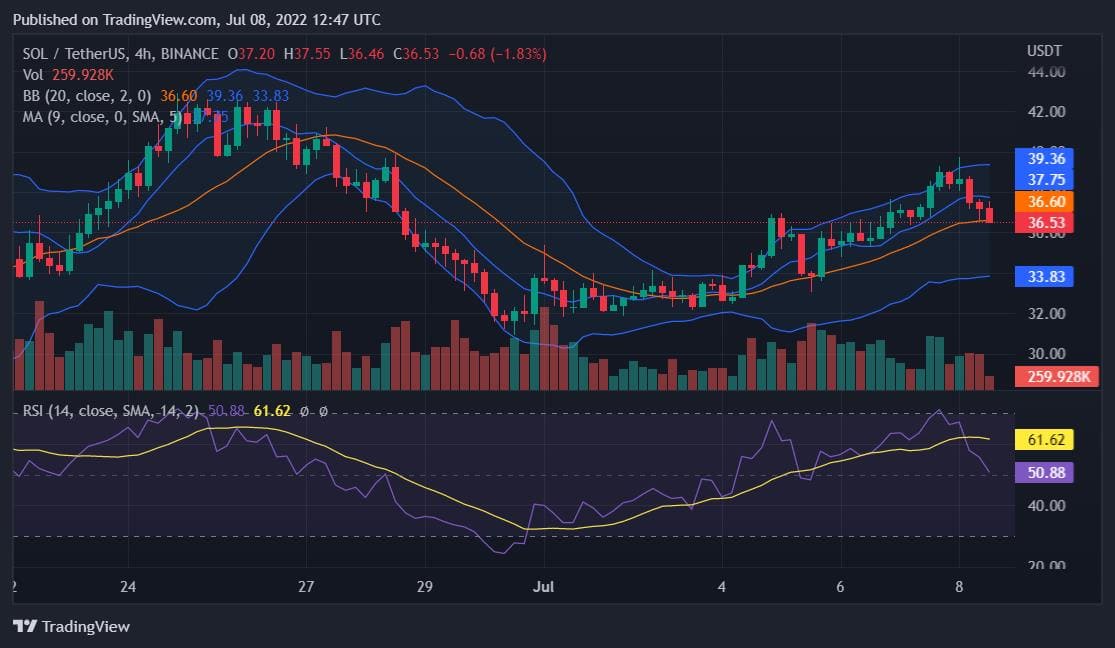 There is a bullish movement on the SOL chart, volatility has decreased, and the upper limit of the Bollinger band is at $41.7, where the most significant resistance is now located. The lower border of the band is located at $30.9, which serves as the main support for the token. The crossover of the moving average curve shows bullish momentum. But the RSI fell to 50, which means that the market momentum is falling and selling dominates buying. That is, in the near future, the bears may regain the initiative and continue to put pressure on the price.

Today, the main meme-crypto showed the consequences of the "Mask effect" after yesterday's post that The Boring Company began accepting the coin and returned to yesterday's daily level. DOGE is currently trading at $0.069, with a daily price increase of a modest 0.29%, the coin’s market dominance has dropped to 0.97%, and the volume to market cap ratio is 0.05139. 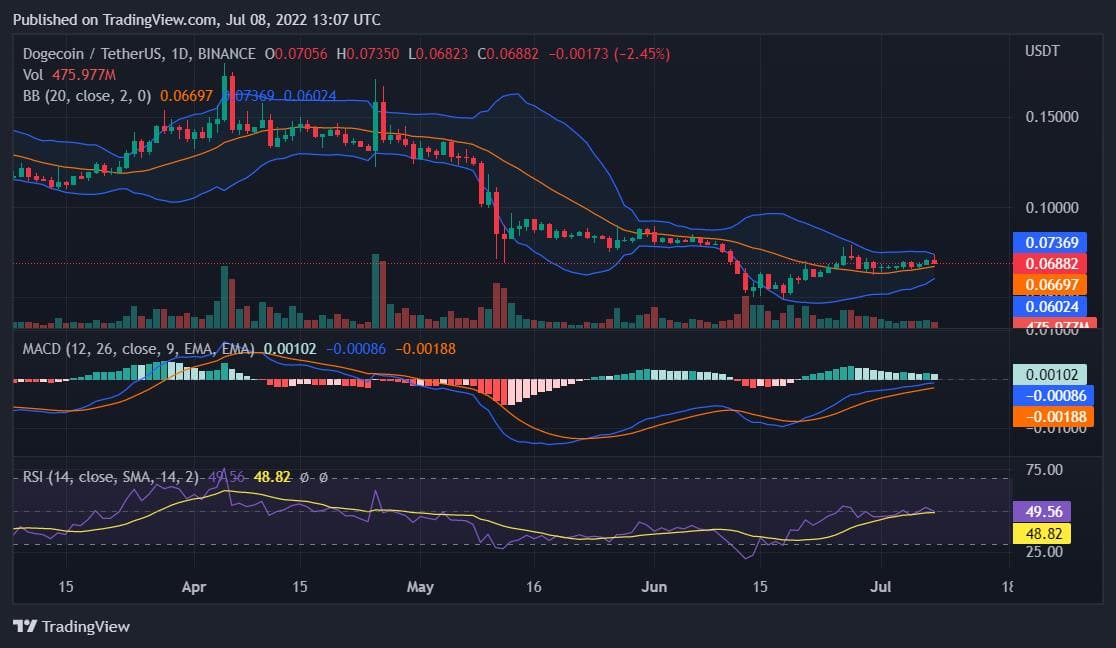 Over the past 24 hours, the price of DOGE broke the resistance at $0.07, so investors can expect the token to reach higher highs in the coming days if it can break this price level again and turn it into a support level. However, given the buying pressure, the chances of this seem slim.