BTC in the Hands of Bears, ETH Avoided a Drawdown and XRP Flies to the Moon: Results of the Trading Week and Expert Forecasts

The dependence of the cryptocurrency market on macroeconomic factors continues to grow. The fight against inflation in the US is gaining momentum, so the country's Federal Reserve Fund once again raised interest rates by 75 basis points (0.75%). In accordance with this, during the week, the TOP-10 digital coins by capitalization remained red, and growth was outlined only on Friday. What is it connected with? The narrative about inflation hedging with BTC is catastrophically outdated and, as we can see, has nothing to do with reality. However, the growth of the flagship against the backdrop of a worsening crisis is most likely due to the fact that the bears needed a break after large-scale sales last week. By the way, the market capitalization has not been able to return to $1 trillion, and the general mood among investors has not changed much since last week. However, the end of the week brought a green light to the market and some interesting developments. First of all, the successful launch of the Vasil hard fork in the Cardano system. This upgrade improves the smart contract ecosystem, increases network bandwidth and reduces transaction costs. Most importantly, the update will allow you to create blocks faster. In addition, a week has passed since the massive Ethereum merger today. This term is enough to draw preliminary conclusions about the attractiveness of the asset and its demand. Unfortunately, ETH failed on both fronts, with investors starting to withdraw assets from crypto-silver on the day of the upgrade. The intensity of withdrawals has decreased, but the trend has continued. What to expect from the market next? Let's figure it out.

Deceptive Rise of BTC: the Flagship Is Again Looking for a Bottom?

As the US Federal Reserve clearly lost control of inflation, Bitcoin rushed down along with one of the most important S&P 500 stock indexes. Crypto-gold week began with a support break and a collapse to $18,420. with recovery above $19,000 today. But market analysts suggest that $18,200 is not the position the bears were looking for. The short-term technical outlook suggests that a move to $17,800 could begin. 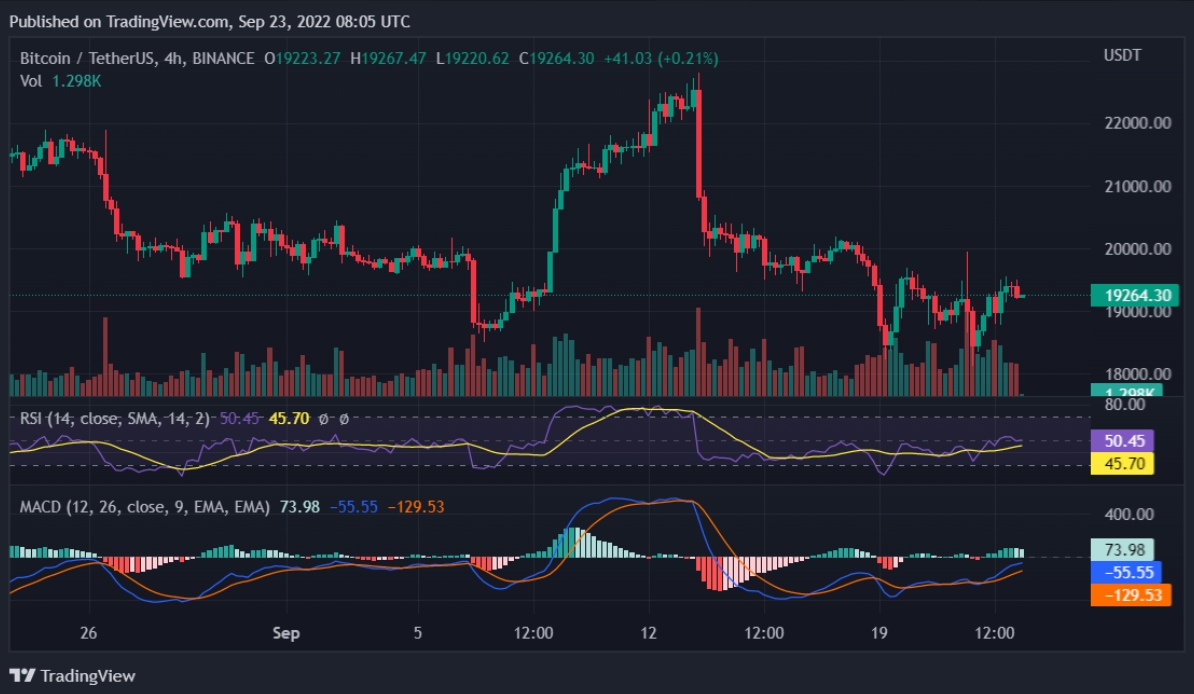 The 4-hour chart shows that there was significant volatility in September, but the price failed to form new highs. The move above $20,800 was impressive, but the failure to overcome the resistance at $22,700 meant that the buyers ran out of steam for a long time to come. A little more than ten days ago, the structure turned bearish, did not change, and assumed further losses. The RSI on H4 was also below the neutral 50. Now this mark has been crossed, but the reversal of the coin’s rate, which occurred between the 61.8% and 78.6% Fibonacci retracement levels, indicates a local bottom at $17,800, close to $17,700 (recovery level Fibonacci 23.6%). To implement the optimistic scenario, it is necessary to close the week above $20,000. 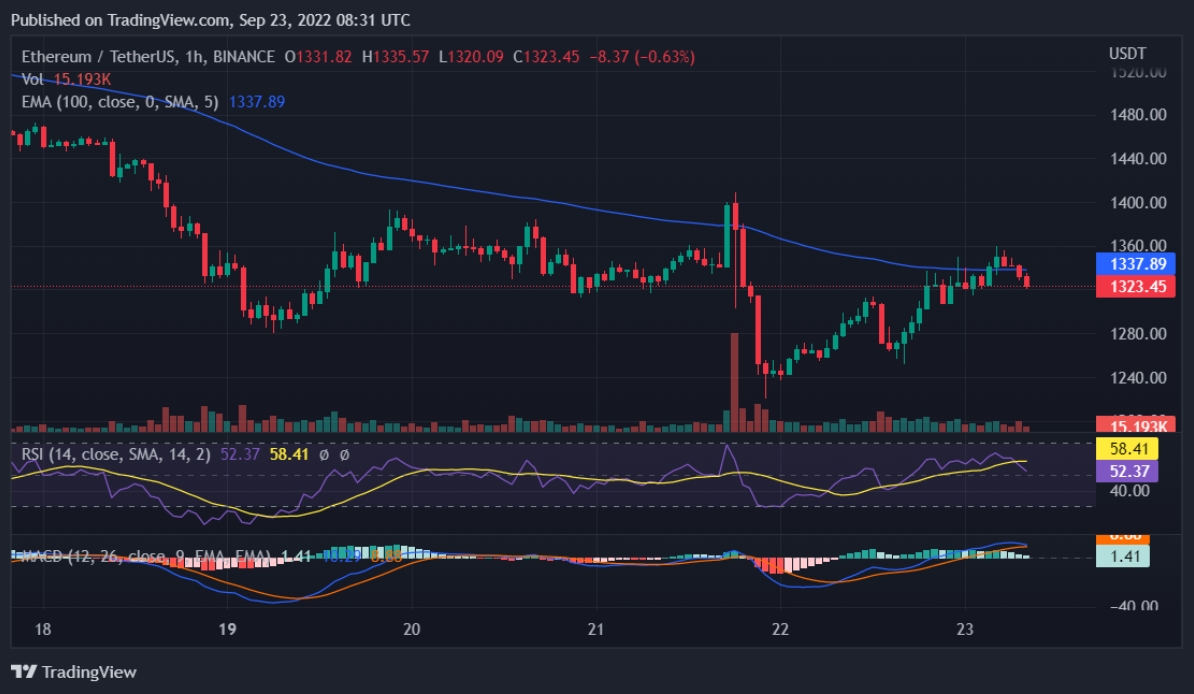 The trend rebounded from the strong resistance at $1,350 and the bulls lost the initiative. The price of crypto silver crossed the 100-day moving average in the opposite direction, which indicates a bearish scenario for the closing of the trading week. At the same time, the RSI is still above the median line, which means that buyers have not yet exhausted the momentum. If ETH fails to consolidate above $1,350 and continue to the resistance at $1,400, we will see a continuation of the fall. The next major support is near $1,288. A break could trigger a sharp drop to $1,220, where the power of the bears is almost unlimited.

XRP Is the Leader, But the Race is Over?

XRP managed a fantastic run with over 40% gains in two days to reach $0.55 from a position of $0.40. But the race is over and the bulls are clearly exhausted, as at this point the asset has reversed and is now trading at $0.50. However, the coin still has growth potential. 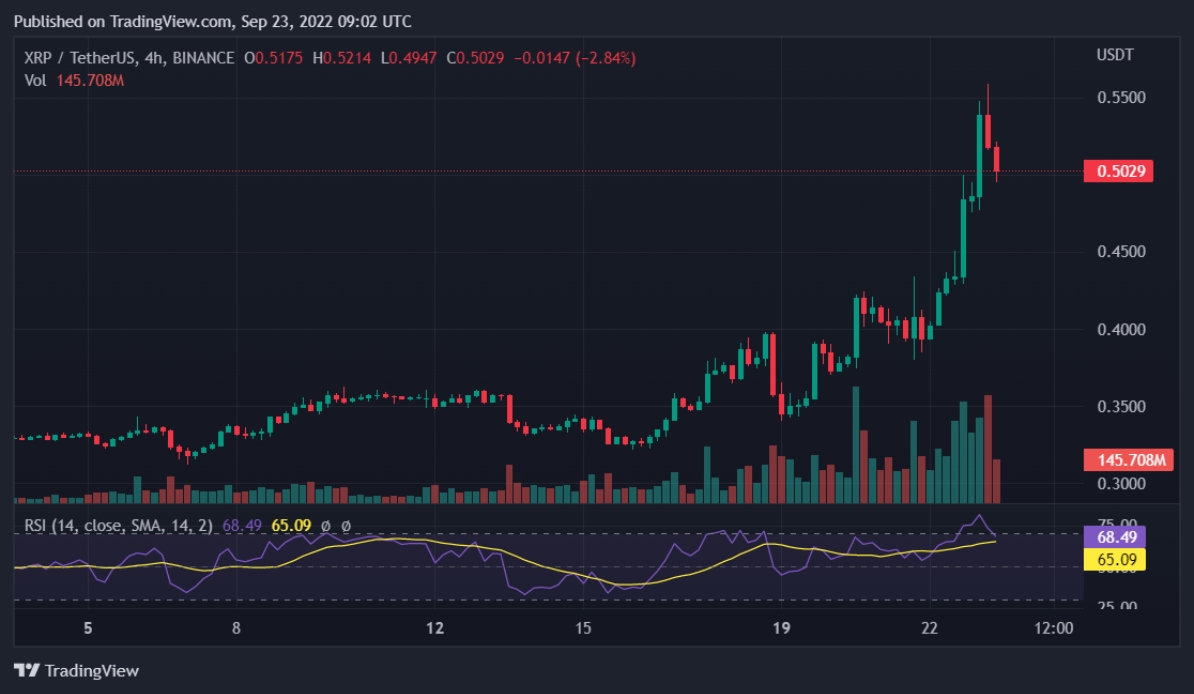 The reasons for the rally are attributed to the fact that Ripple and the US Securities and Exchange Commission recently filed their petitions for a summary judgment. That is, a protracted lawsuit may soon come to an end, and its decision, presumably, can be made in favor of Ripple. At the very least, this is indicated by the fact that crypto lobbyists in the US have received court approval to file a brief review of the SEC v. Ripple case.