The worsening economic crisis continues to deal tangible blows to the crypto market. But, in the local time frame, the damage is almost imperceptible. The most dramatic movement of the market’s flagship has traditionally taken place at the end of the week, on October 13, when the price of BTC fell by almost $800 in a matter of hours, and then also quickly soared to $1,500. Market experts assess the short-term collapse and rise of Bitcoin as a bear trap and link it to the latest data on the US consumer price index. In short, this indicator exceeded the predicted value during the week, as a result of which active buyers of the crypto-flagship got pretty nervous. But this effect did not last long. Over the past six months, the attitude towards digital assets, even within the crypto community, has changed significantly: if earlier they were considered almost a universal tool for hedging funds, today other features of blockchain currencies are brought to the fore, namely, the high speed and simplicity of transactions in tandem with safety. Now let's see how exactly this new attitude affects market realities.

Following the release of the US CPI, BTC fell as expected to $17,985, hitting a new October low. But after a few hours, the price recovered and consolidated above $19,000. The daily increase of the flagship was 4.6%, and in two weeks the price of Bitcoin increased by 1.6%. The high volatility and nature of spontaneous fluctuations in the price of BTC at the beginning of this year “hinted” to market analysts that the average price of a digital asset by the end of this month will be approximately $20,015, given that the minimum price of the trading range will be $18,109, and at the maximum Bitcoin will trade at $20,587. 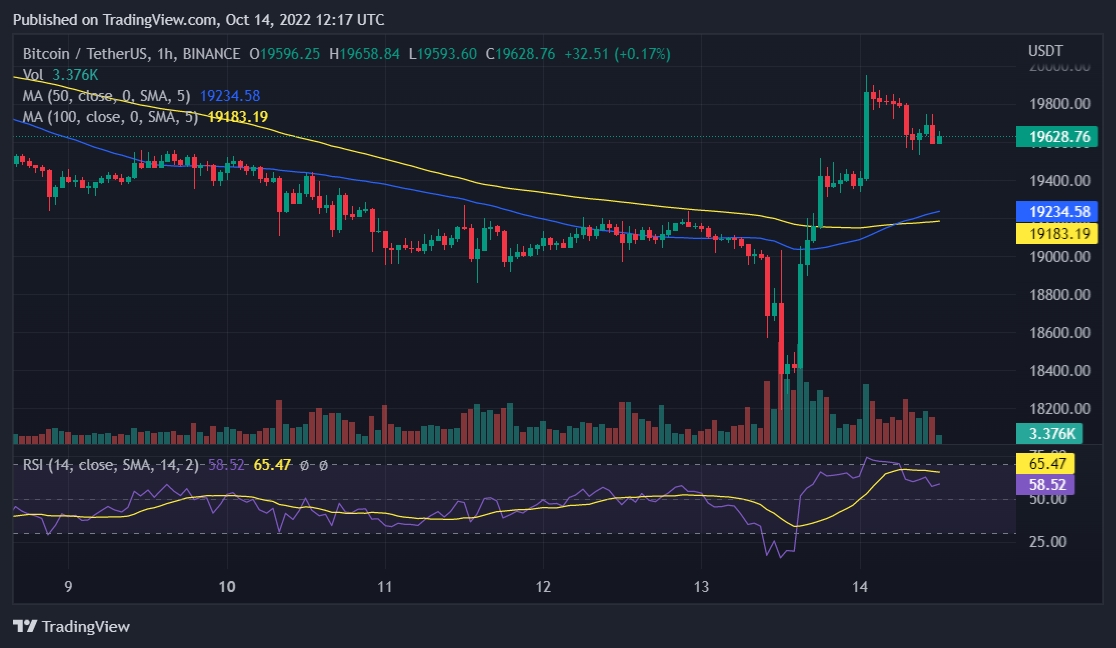 Given the correlation between the dollar and Bitcoin rates, the chart of the crypto market flagship clearly indicates that the bulls did not use the full potential of the situation. However, the moment has been lost as the crossover of the 100-hour and 50-hour moving averages indicates growing selling pressure. However, the RSI is in the overbought zone, and this factor is likely to contain the bears until the start of the next trading week. The next target for the bulls will be the $20,000 level. If the price manages to gain a foothold above this mark, the dominance of sellers will weaken. Otherwise, we will see a return of up to $18,500.

During this week, 6,000 ETH was burned, which led to an increase in the scarcity of the asset and an increase in its price. This indicator is still insignificant, and the daily increase in crypto-silver was just under 10%. However, some analysts claim that the asset will be able to grow by about 35% by the end of October. At the very least, this is indicated by the fact that the rising number of hodlers has spurred the price up to the horizontal trendline resistance around $1,800. There is no guarantee that this mark can be reached in the medium term, but the ETH token burn will continue. 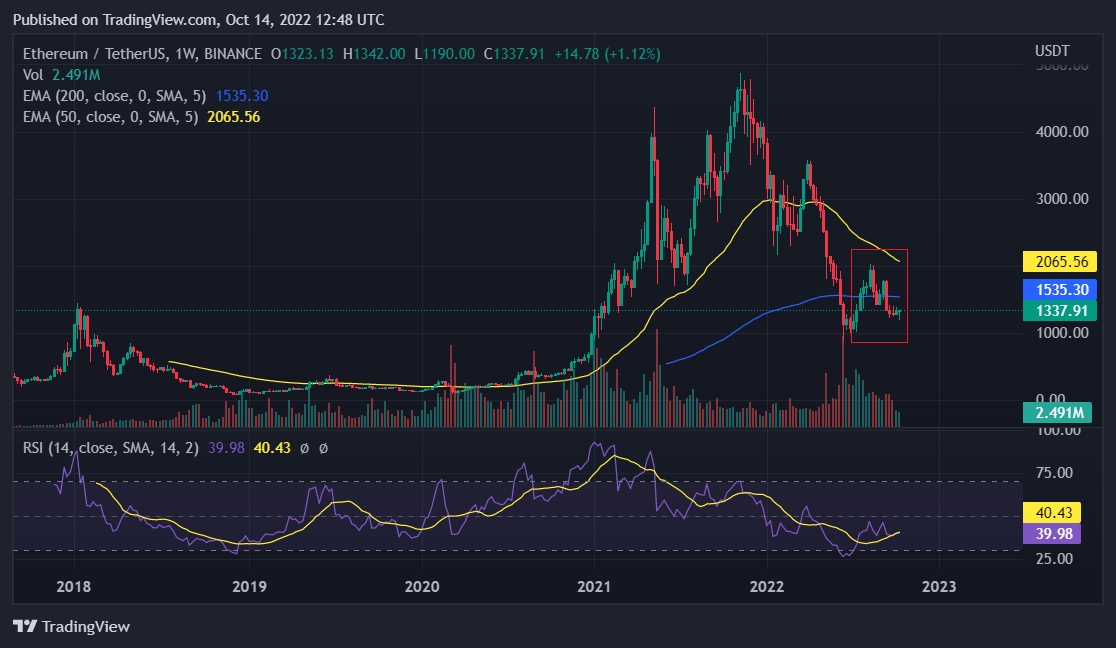 However, Ethereum's long-term outlook remains bearish. The asset is still dependent on macroeconomic factors, and rising inflation in the world's largest economies only exacerbates the situation. Ascending triangles on the chart are downtrend continuation patterns. Their sequence indicates a return to bearish sentiment in the market. As a rule, a breakdown of an ascending triangle leads to a price drop to a level whose length is equal to the height of the triangle. Thus, the ETH profit target is around $750, which is about 40% below today's price.

Over the past 24 hours, ADA has soared 5.7% and is now trading at $0.3836, which clearly indicates a recovery from yesterday's sell-off associated with the release of data on the growth of the US consumer index. However, on a weekly basis, the coin lost 9.4% of its price due to negative macroeconomic conditions weighing down the cryptocurrency market as a whole. A number of market experts predict further growth of the asset, but its prospects have not been determined. However, many of these predictions are based on the assumption that ADA is trading below its “fair price.” 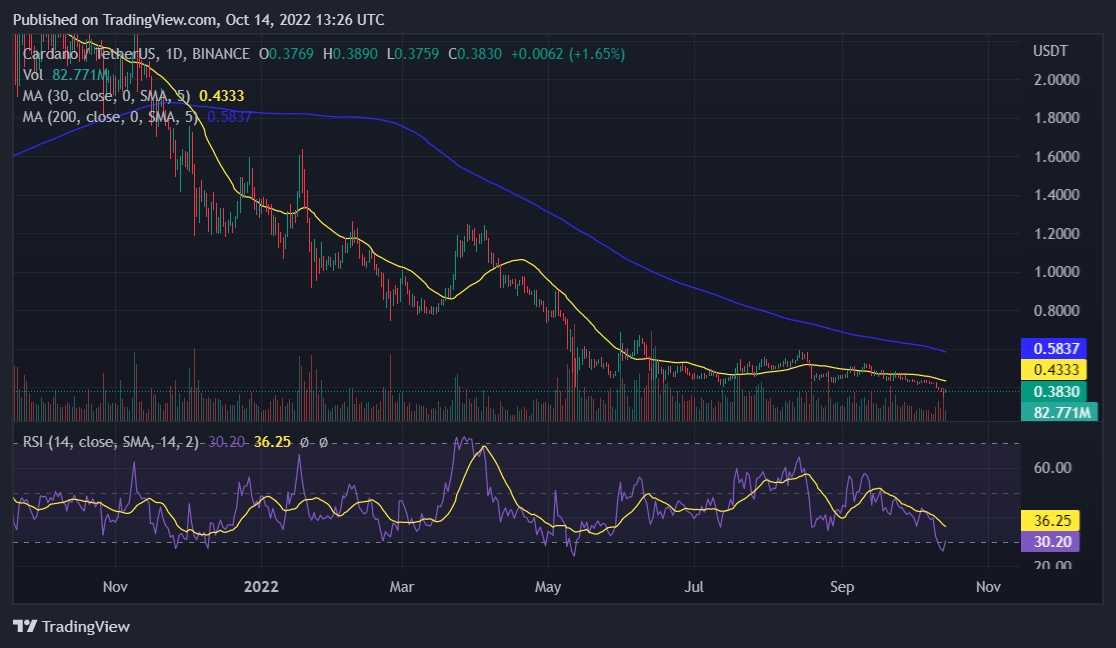 As for the technical data, the RSI of the coin during the current week has made a reversal from the deep oversold zone, which, together with the rise in the price of the coin, indicates the return of buyers to the market. The most ambitious targets for the bulls in the near term will be the levels of $0.423 and $0.457. If they can be overcome, then by the end of the year there will be a prospect of fixing the price above $0.5.