As expected, the first trading week of 2023 did not bring any fundamental changes in the price dynamics of key digital assets. Almost all top cryptocurrencies have remained in their trading ranges, and the global market condition is still almost completely formed on the basis of last year's trends. Over the past two days, the market flagship has lost about 0.2% of its value. Analysts attribute this drawdown to the massive problems of one of the largest crypto banks Silvergate, whose shares have fallen in price by more than 50%. Over the last quarter of 2022, Silvergate's cryptocurrency deposits dropped by 68%, forcing the bank's management to make the difficult decision to lay off 200 employees (about 40% of the entire staff). At the same time, key altcoins remained in their trading channels. It is noteworthy that most coins show a slight weekly increase in price closer to the weekend, while daily price changes remain mostly negative. However, this trend is typical of Friday's "sluggish" market and is partly due to a decrease in trading volume. Since the beginning of the year, the total market capitalization has grown from $795.1 billion to $813.8 billion. The trading volume in the last 24 hours was $27.1 billion. -silver over the same period rose from 18.43% to 18.76%. And now let's move on to the details.

Which BTC Indicator Will Be the First to Indicate a Bullish Move?

While the flagship remains extremely sensitive to dramatic market events, experts are actively trying to determine the nature of its movement for 2023. So, according to the well-known cryptanalyst Kelvin Swenson, the weekly RSI BTC is about to break through the diagonal resistance, which could be the starting point of a new bull race. Swenson is referring to the weekly RSI breakout near the end of the 2018 BTC bear market. By pointing to BTC's diagonal resistance line, he states that the market turns bullish when the RSI rises above the resistance level. Given the momentum with which the weekly RSI is rising, the crypto analyst says that BTC is headed for a significant bullish move. 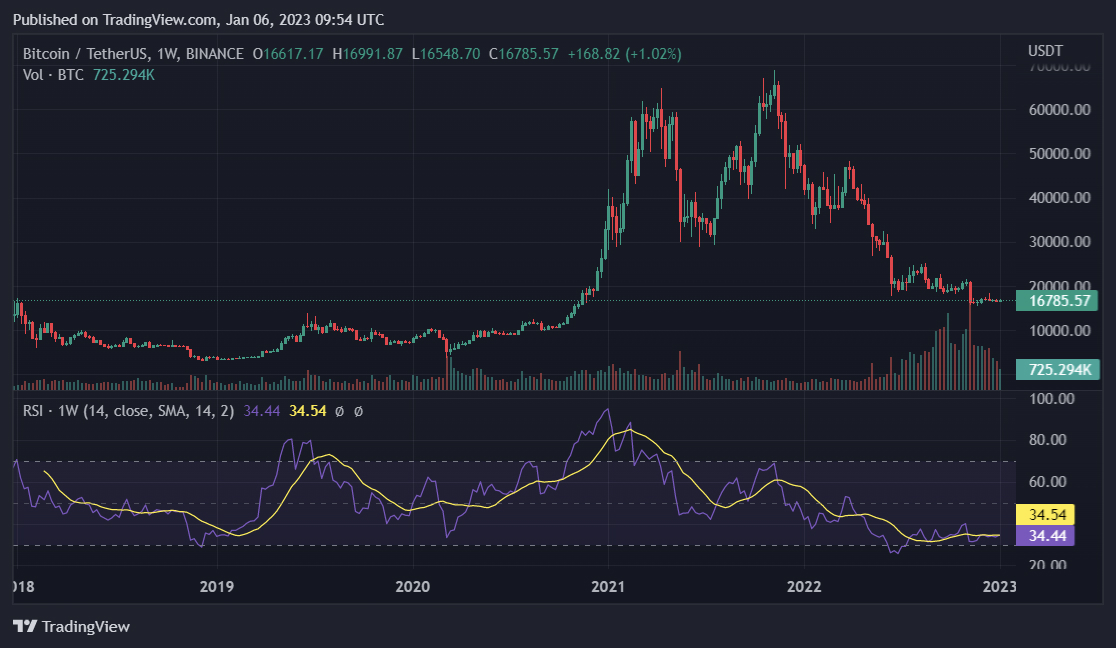 In addition, well-known analyst Michael van de Poppe also believes that BTC will experience a significant price spike in the coming months. He predicts a bullish rally between $30,000 and $35,000 as the US Federal Reserve pauses interest rate hikes and lowers inflation. However, at the moment there is not a single fundamental event that could provoke such a powerful breakthrough of the crypto-flagship.

ETH Has Stabilized and Hints at Growth 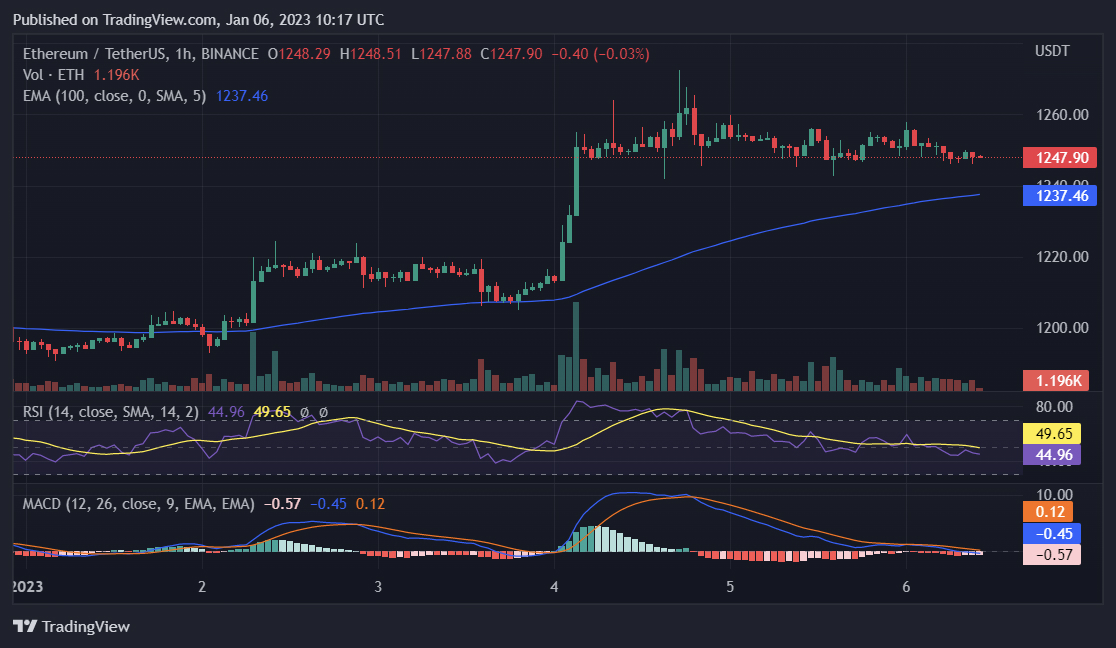 Immediate resistance is now around the $1,260 level. The next major resistance is around the $1,270 level. A clear move above the $1,270 resistance could lead to a significant upside. In this case, the price may possibly rise to the resistance of $1,320. In a less likely downside scenario, the first support would be $1,230. It lies near the Fibonacci 61.8% retracement level of the up move from the $1,204 swing low to the $1,271 high. the possibility of a further decline to $1,180.

Literally from the very beginning of the year, SOL has experienced two powerful price boosts, which are associated with growing interest in the BONK meme token, launched on December 24, 2022 on the Solana blockchain. On Monday, the ecosystem’s native coin rose from $10 to $11 in just an hour, and literally two days later its price tested the $14.2 mark, after which it corrected and now SOL is trading at $13.08. As of January 6, SOL's market capitalization was $4.85 billion, indicating an inflow of approximately $1.59 billion after December 30. According to CoinMarketCap, on the weekly chart, the coin’s capitalization peaked at $5.16 billion on January 4. 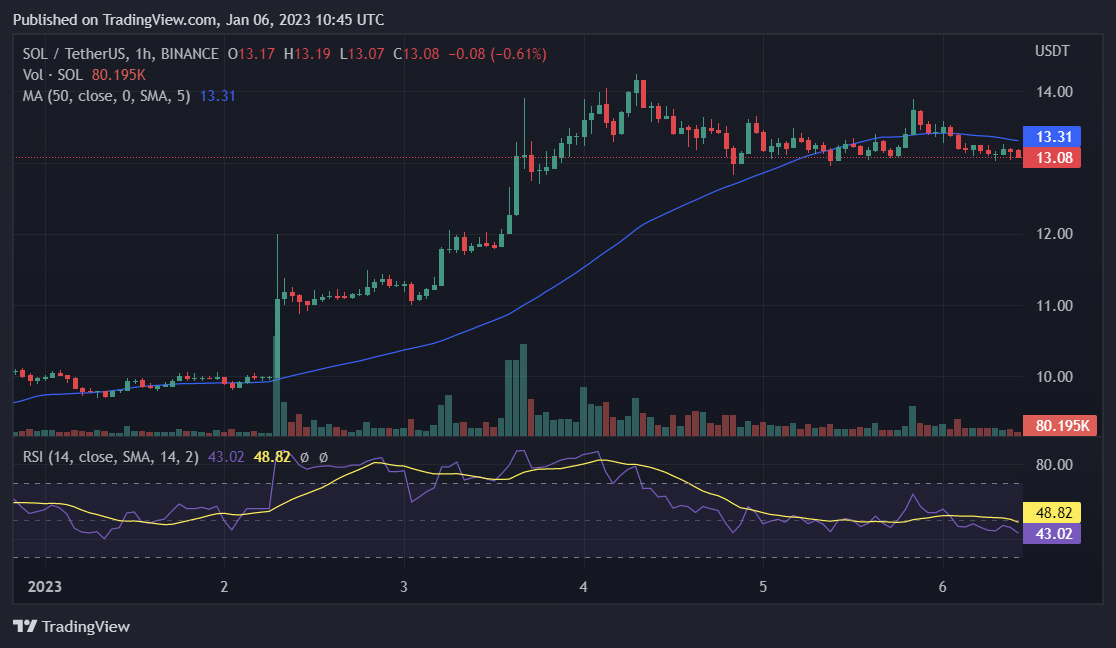 After an active week, buyers have slowed down, so the RSI indicator is currently recording a gradual transition to the oversold zone. It is also trading below the 50-day moving average, but it is likely to break through early next week. In the first days of 2023, SOL managed to gain a foothold above $12.6, so analysts recommend taking a closer look at this coin.