BTC and ETH Boost and Altcoins-Champions: Results of the Trading Week and Expert Forecasts

If we filter out the noise associated with the purchase of Twitter by Elon Musk and the predictable short-term DOGE rally in honor of this event, we will notice an interesting trend: the market is starting to rise again by the end of the week and this trend characterizes literally all assets from the TOP-10 coins. Moreover, the irony of the current market situation is precisely that DOGE, which experienced the “Musk Effect” on October 29, broke away from the main market trend, soared by 46% in a week, but as soon as the wave of hype broke on the breakwater of the real situation with Twitter, the asset became almost the only one of the TOP-10 coins, which at the end of the week began to become cheaper and gradually lose its attractiveness for new buyers. But with Polygon (MATIC) the situation is the opposite. At the moment, the altcoin occupies the 11th position in terms of market capitalization and is clearly striving to take a place in the top ten. Over the week, the price of the coin soared by 21%, and only in the last 24 hours it has become more expensive by 14.4%, and the bullish momentum is still not exhausted, although at the time of writing, the growth in the asset price has clearly slowed down. But today we will talk about the top three digital currencies (not counting USDT, of course) and try to determine the prospect of their movement based on current indicators and weekly activity.

Capitalization Is Growing — Volatility Is Falling: BTC Is Behaving Like a "Good Boy"

Despite the drop in market dominance to 38.4%, by the end of the week, BTC managed to partially return the capital withdrawn during active weekly sales and restore its positions from a week ago. The coin has consolidated above $20,000 and shows daily and weekly gains in the range of 1-2%. But the 14-day growth of the coin can be considered truly optimistic, since during this term it grew 8%, which is a record high for the last 3 months. Now the flagship is trading at $20,596, its capitalization has again reached $395.5 billion, and volatility has decreased by the end of the week, which indicates a movement towards equalization of buyers' demand and sellers' opportunities. 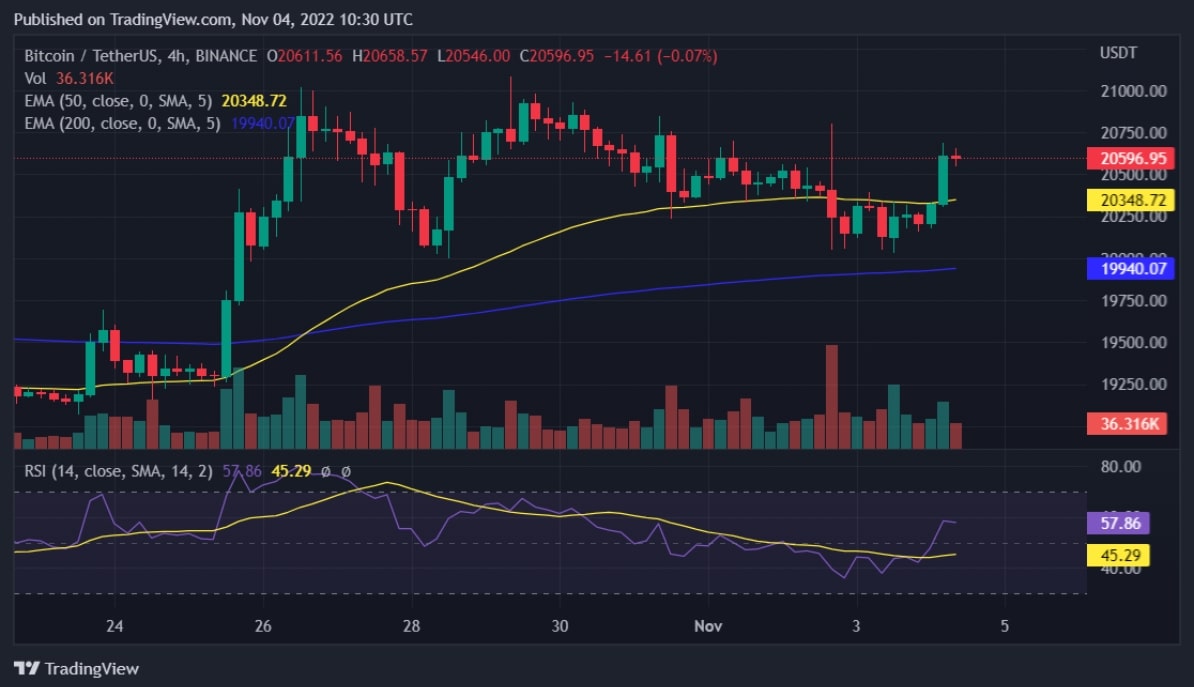 Another confirmation of this thesis is the RSI indicator. Here we see that the indicator line has started to descend into the balance zone from the overbought zone. That is, in the short term, BTC is still bullish, but this "fuse" is drying up. How long will the current outbreak of buying activity last? Most likely today we will see a return to the traditional bearish course. This does not mean that the price of bitcoin will fall sharply, but you need to understand that the main goal of the bears now is the $18,000 mark, and the weaker the buyers, the more likely it will be reached.

ETH Breaks Through Resistance at $1,560 and Doesn't Stop There

During the week, the bulls were able to push the price above the resistances at $1,540 and $1,550. There was a clear move above the Fibonacci 50% retracement level of the down move from the $1,620 swing high to the $1,501 low, and there was also a break of the critical bear trend line with resistance near $1 560 and subsequent fixing. ETH is currently trading above $1,570 and the 100 hourly simple moving average. Immediate resistance for the coin lies near the $1,590 position, which is close to the 76.4% Fibonacci retracement level from the same down move, high at $1,620 and low at $1,501. 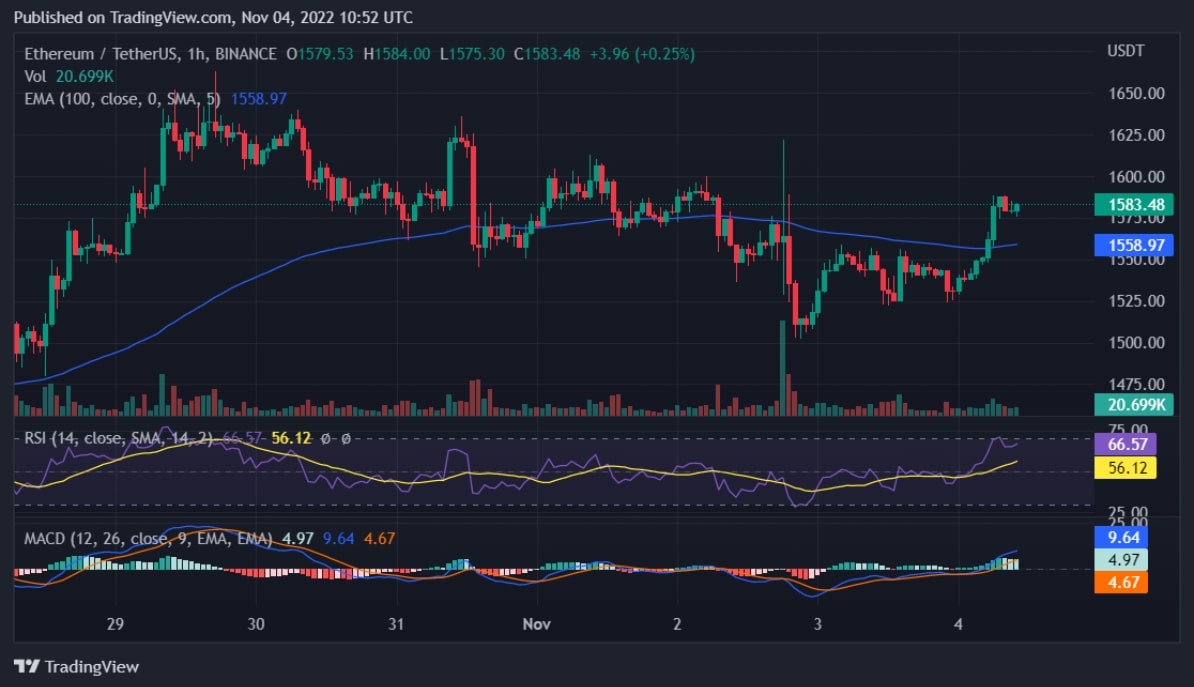 The next major resistance is near the $1,600 level. A clear break above could set the pace for a fairly stable uptrend. According to the most optimistic estimates, the price could reach $1,650. Some analysts argue that reaching resistance at the psychological level of $1,700 may be a matter of just a few days. But if ETH fails to rise above the $1,600 resistance, a decline could begin, and then the price will return to support at $1,560 and the 100 hourly simple moving average.

BNB Shows the Most Stable Growth Among TOP-10 Coins

The Binance native coin started to rise from the third decade of October, but this week buyers have clearly taken control of the price, especially considering the Heikin Ashi weekly candlestick chart. The daily time frame looks even more optimistic and shows positive MACD and RSI, as well as the SMMA (Short Moving Average) that has started to rise. At the same time, the asset grew by 22% over the week, and the daily growth was about 5%. 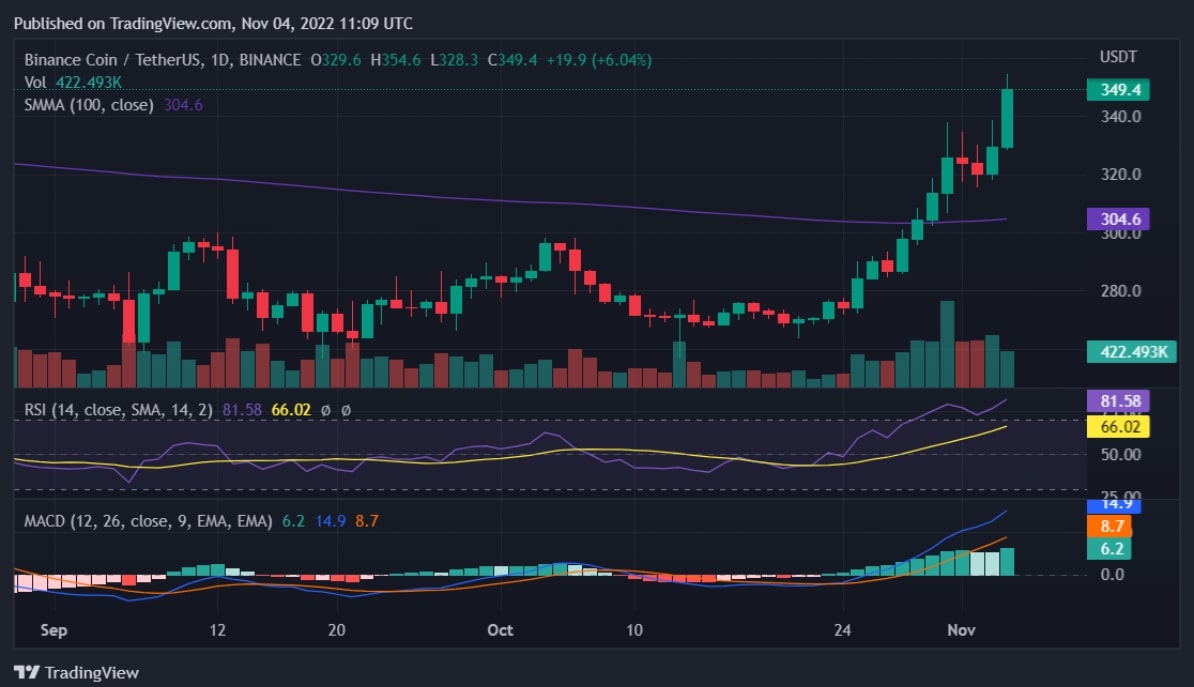 However, RSI indicates a fundamental overbought of the coin, so we should expect a decrease in consumer demand further, which will eventually lead to a correction. The bulls actually successfully completed the roll and now there will be a rollback of the course. There is also a possibility of a bearish momentum on the weekly timeframe, but for this, buyers should stop taking the initiative right now.